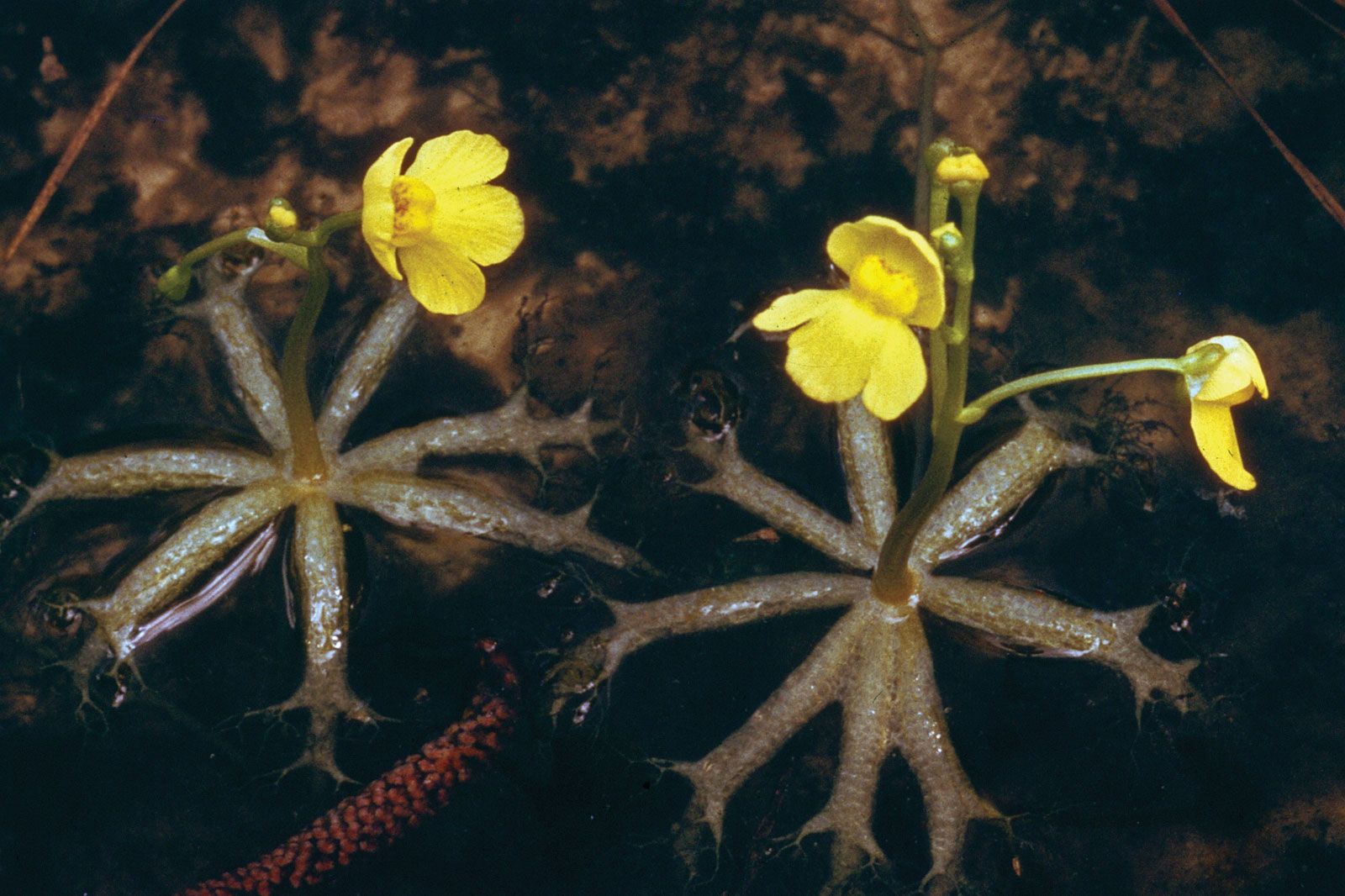 A plant called bladderwort (Utricularia) uses zooplankton and insects as food sources. They are referred to as carnivorous plants. As they can get the light they require by eating other living things like plants, animals, insects, etc.

The genus of carnivorous plants, known by the common name Utricularia, comprises around 232 different species in its family. Bladderwort can be found all throughout the world, with the exception of Antarctica, where it only grows on wet or watery soils.

These plants catch living things like insects in hollow sacs that resemble bladders and are used to digest any prey they come into contact with. The trap can consume the rotifers and protozoa from wet soil and is approximately 0.2 mm to 1.2 cm long.

These can be multiplied by using their blossoms, which are comparable to the most well-known orchid and snapdragon plants. Some of the species are quite rare and can be found in South America and Australia.

The most attractive flowers are those that are purple and yellow, yet it has many different hues and is simple to grow. It has a size range of 3 mm to 10 cm, and most of its growth is vertical. You might think some of its colors are lovely, and that’s possibly why some insects are drawn to its flowers.

Some species of Utricularia have branches as well as slender stems, and occasionally they do generate leaves that can carry out the photosynthesis process that plants generally carry out. At that point, it might stop eating small creatures and turn to the sun for food.

Bladderwort is used to treat kidney stone sufferers as well as those with urinary tract infections.

Additionally, they could aid in triggering gallbladder secretions and perhaps promote weight loss. Additionally, it can treat spasms, fluid retention, and edema [Source 1].

The dried bladderwort leaves can be used to brew tea with medicinal benefits, according to WebMd. Many people employ this carnivorous plant to treat kidney stones, but I argue that lemon and pomegranate juice would be preferable because they clear the tract.

There are more possibilities to attempt because there isn’t any solid scientific evidence indicating whether they will or won’t work.

Warning: Consult a doctor or a plant expert before utilizing anything for medical purposes.

Native to the Northern Hemisphere, bladderwort has been found in a variety of habitats, including rivers, marshes, huge lakes, streams, soggy soil, small and large ponds, and deep water that is 4-6 feet below the surface.They can be found in various regions of the United States.

Bladderwort mostly consumes small insects, including larvae, water fleas, and worms, as well as aquatic invertebrates like annelids and arthropods ( which are small tiny animals with no backbone). These are included in several animal species.

Bladderworts are adapted to arid climates and can directly draw all the water from neighboring surfaces through their roots. Bladderwort can live in low-water areas with ease and devour various types of microscopic insects and zooplankton to stay alive.

To catch any prey, these plants float both above and below the water’s surface.

The bladderwort has no roots and only a stalk, which is occasionally transparent. Above the stem is a flower bloom, which closes when an insect rests on it.

The four most popular Utricularia species are among its more than 210 total species.

In ponds, lakes, and other bodies of water, all four of these are waiting for the little insects with leaves floating on the water’s surface. They don’t need roots and develop their stems horizontally.

Is Plumbago Toxic to People – (With Full Details)

Spider Plants Care: A Beginner to Advanced Guide to Propagation and Pruning