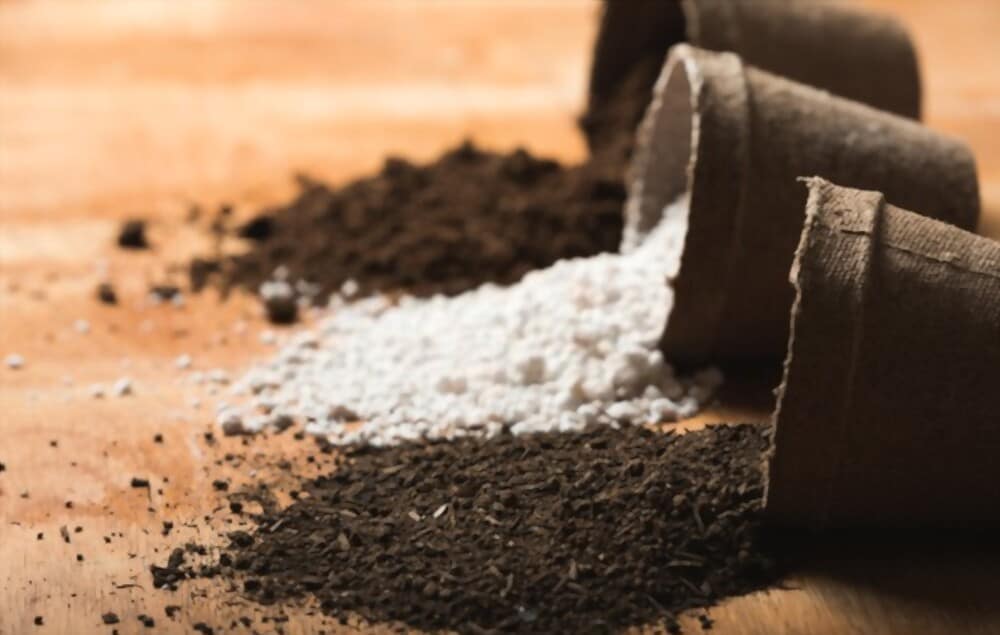 Anaerobic activity is one of the most frequent causes for soil to start to smell. Several things, like excessive improper aeration or overwatering, can contribute to this.

Potting soil may have an unpleasant odor as a result of issues with poor drainage and an oxygen shortage that causes the anaerobic breakdown of organic substances. As a result, foul-smelling gases like ammonia and hydrogen sulfide may be produced. Any deviations from the expected earthy aroma of soil should be investigated.

A variety of soil mixtures that can all work together to give the plant the best nutrient uptake, drainage, and aeration can be found in garden and potting soil.

In this post, we’ll discuss the various reasons soil, whether it’s garden or potting soil, stinks and what you can do to minimize or completely get rid of the odours.

The majority of my soil-related issues were resolved by using Miracle Grow Potting Mix, which I have found to be a highly cost-effective soil. Clicking here will take you there.

Break Down of Organic material In the Soil

These substances have the potential to be very bothersome when they are released into the local environment, particularly hydrogen sulfide.

This is typically brought on by underlying soil problems such poor soil aeration and bed drainage. Anything from a plant that is root-bound to a poor soil mix with little room for the water to drain through might contribute to poor drainage.

Along with root rot, poor aeration, which is the main contributor to anaerobic synthesis, is a side effect of high water retention.

Healthy soil has good drainage and soil aeration, and addressing these two issues would completely solve the smelly soil issue.

I also put this Blue Ribbon Organic compost on my plants when I repotted them, and it got rid of the unpleasant aromas that some soils had. Clicking here will take you there!

Peat moss may appear to be an excellent alternative for soil, but it might develop some odors over time.

Peat moss does not add any nutrients to the soil when used as a soil amendment, but it does hold moisture, which is beneficial for thirsty plants.

The smelly gas the earth may release, not the moisture, is the issue here.

It smells strongly like peat moss and earth, which is an issue. In fact, if you use too much, it may be rather overwhelming.

As peat matures, it’s very typical for it to begin to smell sulfurous. Until it’s time to repot, it usually goes unnoticed. Although I don’t believe it specifically endangers plants, it does show that the soil is growing more anaerobic.

Peat moss is not a good choice for indoor plants because of this.

How do you Fix Smelly Soil

By increasing the amount of space between soil particles and incorporating soil amendments to fill some of that space, the odor can be removed in stages.

By enhancing the soil’s aeration and drainage capabilities with soil supplements like perlite and vermiculite, smelly soil can be remedied. When added, soil amendments would widen the gaps between soil particles and create a channel for water to freely drain.

The top 2 to 4 inches of soil typically contain the most organic matter as well as the most microbial and bacterial activity. Topsoil is typically dark in color because of this. The top layer of the soil may smell awful due to a lack of oxygen.

This layer of topsoil would need to be removed in order to address the issue of odorous soil.

Here are some simple suggestions for how to lessen this offensive odor in your yard.

Mix in Activated Charcoal In the Soil

Until the filter surface is completely saturated, gaseous chemicals (such as hydrogen sulfide and ammonia) adhere to the surface of the activated carbon.

A process called as adsorption is used to attract and remove harmful gases from the air using the carbon’s structure, which has thousands of tiny pores.

Although this works well to get rid of unpleasant smells, it won’t stop them. The smell will eventually come back once the activated carbon is saturated.

But don’t worry; we have more long-lasting remedies. Read on!

Remove Rocks from the soil

Till lightly away the topsoil’s first several inches with a shovel or rake.

Put any rocks you’ve dug up with your trowel in a different container.

To make up for the space the stones have taken up, add more dirt to the mixture.

The removal of rocks will aid in preventing soil compaction and allow for greater drainage by creating air holes in the soil.

Old roots decay and give the soil a pungent, unpleasant smell. It’s crucial to get rid of old roots.

You can get a tiny shovel or a root picker for this purpose from a gardening supply store. Just clear the soil of any dead roots. More is always better.

On whether or whether you should leave dead roots in the soil, see our in-depth article.

Increasing the drainage and aeration of the soil can be accomplished by adding soil amendments like perlite or vermiculite. These additives to the soil can help with odor issues.

Minerals such as perlite and vermiculite can be added to potting soil. They are incredibly light materials that improve the soil’s drainage and aeration. Additionally, it helps strengthen and improve the structure of the soil.

The drainage and aeration of the potting soil will be improved by adding perlite, vermiculite, or sand, which will also decrease future odor production.

See our in-depth post on soil amendments here for more information on how additives like vermiculite can help your soil.

When organic matter deteriorates, good soil takes on a black color. It might contain some plant food, such as some mineral fertilizers, which would be a good indicator.

Chemical-containing soils should not be purchased because they will do much more harm than good.

There are many different types of soil mixtures, but healthy soil should possess the following qualities:

A healthy soil will store precisely the right amount of water for nutrients to move freely from the soil and be absorbed by the plant. Roots are unable to grow and are healthy when the water content is either too low or too high. Either they wouldn’t grow or their roots would rot.

2. Does Not have Weeds

Weeds won’t grow since good soil doesn’t force your plant to compete with its own roots for nutrition.

Many different materials can be used to create good soil. [Sand, clay, chalk, and other materials may all be present in soil.]

Water will swiftly drain away from your plants thanks to good drainage. Additionally, it will prevent roots from drowning in excess water.

The ideal number of air spaces should be present in healthy soil for your plant to breathe. Because it improves the efficiency of respiration, oxygen is vital for plants.

Additionally, it is necessary for the bacteria and other soil-dwelling microbes to transform organic matter into nutrients for the plant.

Organic matter is the primary component of healthy soil. It is in charge of keeping nutrients and water in place so that the plant can access them.

Decomposing bacteria found in organic debris aid in the breakdown of poor soil, adding beneficial nutrients, and enhancing drainage. Your garden and indoor plants will flourish if you add compost or rotten manure since you are giving them a healthy environment to live in.

Your garden soil contains a lot of compost, which is crucial. It enhances soil drainage, aids in water retention, and replenishes the soil with beneficial bacteria. It makes your soil better and maintains your plants healthy.

Gravel is cheap, simple to deal with, and great for improving drainage. By adding gravel, you can improve soil aeration and create a solid drainage system. By letting air and light to enter the potting mix, this promotes the establishment of healthy roots and improves root growth.

Sand enhances soil structure, eliminates drainage issues, and adds more air to the potting mix. Your plants will receive more nutrients from the sand because it replenishes the soil’s mineral nutrition.

This is so that it won’t hold much water, as sand is normally fairly sterile. Sand addition improves soil aeration and supplies sufficient oxygen for good aerobic bacteria to break down organic materials.

One of the most crucial components in creating a healthy soil is clay. It aids in water retention, provides the plant with minerals, enhances drainage, and aids plant nutrient absorption.

Additionally, microbes found in clay aid in the decomposition of organic materials. It is frequently referred to as “alive soil” since it fosters a healthy habitat for the plant.

The most crucial thing to keep in mind, though, is that your soil must meet the requirements and circumstances of your plants. What may be beneficial for one plant may not be appropriate for another.

Because of the anaerobic degradation of organic material just a few inches below the surface, soil can smell foul. This indicates healthy bacterial activity but poor drainage and aeration.

You can eliminate the odor by mixing together a few soil amendments. Aerating the soil with perlite and vermiculite will allow for water drainage, which is essential if you want to prevent that unpleasant smell from coming from your soil.

In addition, adding activated carbon can solve the issue while you look for a more effective strategy to provide your plants a suitable soil mix.

How do I fix my soil that smells like ammonia?

The addition of carbon or just using copious amounts of water to drain the soil and a lime treatment to raise the pH of the soil can be used to remedy frequent ammonia odors in the home landscaping.

The chemical emitted as a byproduct of organic degradation, hydrogen sulfide, is what gives off the rotten-egg or decomposing odor. Debris such as dead leaves and other objects should not be present in the potting soil.

How do you fix smelly soil?

By enhancing the soil’s aeration and drainage capabilities with soil supplements like perlite and vermiculite, smelly soil can be remedied. When added, soil amendments would widen the gaps between soil particles and create a channel for water to freely drain.

Why does my potting soil smell like rotten eggs?

Excessive watering is the most frequent cause of a rotten egg smell coming from plant pots. The bacterium that is producing the smell need a lot of water to survive and reproduce. The root rot caused by this excessive wetness can be harmful to the plant.

Why does my soil stink?

Overwatering, poor drainage, and a lack of aeration are frequently to blame for foul odors in the soil. Unpleasant odors in soil can also be caused by bacterial or fungal contamination of the soil or by using manure that has not been properly treated.