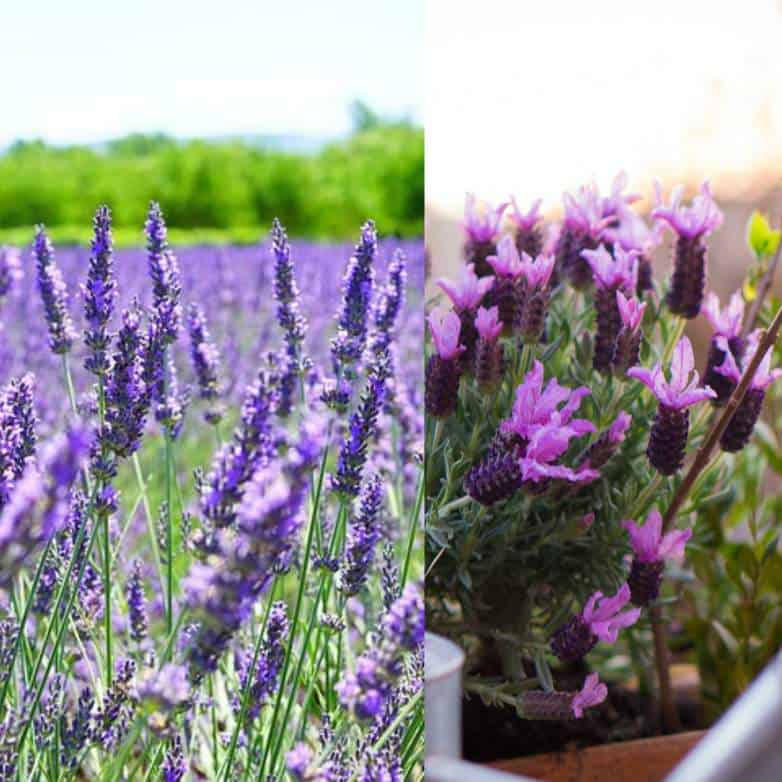 The main distinction between English and French lavender is that the former is cold-tolerant and can live up to 15 years, while the latter only lives for 5 years and blooms for considerably longer. 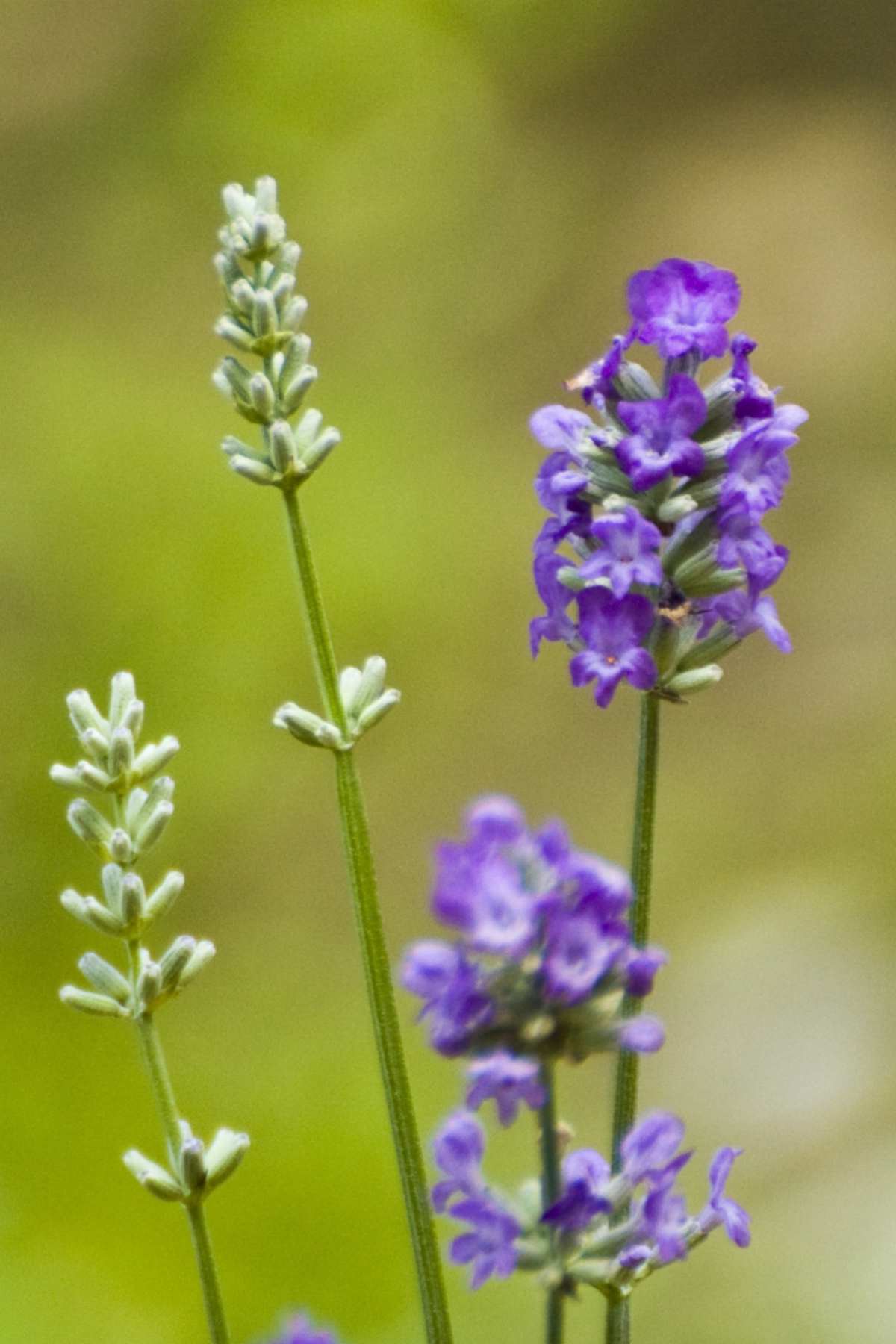 French lavenders are prized for having a longer flowering season that can extend from early spring to late summer.

Once the blossoms have faded, deadheading them will encourage the plant to create additional flowers rather of investing its energy in seed pods. This also requires annual, considerable trimming to form the lavender into a spherical shape.

English lavenders put on a magnificent bloom display starting in mid-June that lasts for only about 4 weeks—much shorter than the French lavenders. English lavender foliage has a stronger and more valuable aroma.

The main distinction between English and French lavenders is that English lavenders may survive several years in the winter and can resist snow, ice, and frost (cold hardy up to USDA zone 5).

Some English lavender cultivars, including the tiny Hidcote superior, are said to be able to endure temperatures as low as -30 °C (-20 °F) on occasion.

The delicate French lavender variety is not fond of cold weather, much less snow and ice (cold hardy in USDA zones 7-9). Only in climes close to their natural environment in Southern Europe, in nations like France, Spain, and Italy, will French lavenders survive the winter.

These nations typically have warm winters with few occasions when the temperature falls below 10°C (50°F) and few instances of frost.

Always use English lavenders for outdoor planting if you live in a chilly area. French lavenders can also be grown in pots and brought indoors to be protected over the winter. (Read my post for more information on winter care for French lavender.)

English lavenders are thought to be a generally more hardy species than French lavender, which includes their capacity to survive in slightly acidic soils.

Although they may survive in neutral soils (pH 7) and tolerate slight acidity, all lavenders prefer alkaline soils up to a pH of 8, but English lavenders often grow better than French lavenders in these conditions.

Read my post on lavender and acidic soils for the simplest method to determine if you have acidic soil or don’t know how to assess your soil’s pH.

The leaf of both English and French lavender emits its distinctive scent throughout the year (the fragrance tends to be strongest in the Spring).

The aroma of French lavender is much more subdued and resembles that of rosemary, whilst the fragrance of English lavender is more stronger and appealing.

While the fragrance of both varieties of lavender still fills the home or yard, English lavender is prized for having a more refined scent.

In fact, several English and French hybrid lavenders (Lavandula x imtermedia) are also produced commercially, especially Lavender Grosso. English lavender is grown for its scent (varieties including Hidcote, Mundstead, and Vera being the most popular). (Lavender Grosso was grown for its hardiness, fragrance, and ability to bloom like a French lavender. Check out my article on lavender care Grosso.

When determining which plant to purchase, one of the most crucial distinctions between English and French lavenders is how long each kind lives.

Even with equal care, English lavenders will survive much longer than French lavenders.

In ideal circumstances, English lavenders can live and bloom for up to 15 years. Even in the Mediterranean region where they were originally found, French lavenders typically live for 4 to 5 years.

This means that when choosing plants for your garden, English lavenders frequently offer far greater value for the money. Lavenders are occasionally used as beautiful hedging or borders, but it would be exceedingly costly to replace each plant every four years.

Hidcote, an English lavender type that can weather winters and produce flowers and fragrance for up to 15 years, is ideal for making low boarder hedges.

The longevity of a lavender plant depends on how well it is maintained and, most importantly, if it is clipped annually. Pruning stops woody development from the lavender’s base and reduces lanky growth. Pruning is crucial for a lavender plant’s longevity and will encourage the growth of new shoots, which will result in more flowers. (For further details, see how to stop lavender from growing long.)

English lavenders are the best option if cost and durability are your top concerns.

There are several sizes of English and French lavenders that have been cultivated.

But many of the more well-known varieties of English lavender (such as Hidcote and Munstead) are compact, making them ideal for hedging and decorative boarders.

After three or four years, these cultivars typically attain their full size, which is 20 inches tall and 24 inches broad. It is believed that Vera, one of the biggest English kinds, is the original species of lavender that is currently raised for its oil.

The more popular French kinds, such “Regal Splendour” and “Ballerina,” mature up to 30 inches (76 cm) tall and 35 inches (89 cm) broad, which is significantly larger than the most popular English varieties. These lavenders produce flowers for months throughout the spring and summer, creating a magnificent spectacle in any garden (in a warm environment).

Any lavender plant’s mature size depends on how well it has been cared for, including soil drainage and sunlight.

The Similarities of English and French Lavender

While there are some changes between English and French lavender species, most aspects of maintenance are relatively similar.

The following conditions are necessary for growing lavender in both English and French.

All species and kinds of lavender thrive on sandy soil that drains well and has a low to medium nutrient level. When in full sun, all lavenders flower and smell their best.

To keep lavender from growing leggy and to increase its lifespan, prune once a year in the spring or fall. Lavenders don’t require feeding because fertilizer encourages more foliage growth at the expense of flowering.

Read my article on the best soil mix for lavender plants in pots and how frequently to water lavenders for further information on how to take care of them.

(For further details, see my post on whether French lavender can survive the winter.)