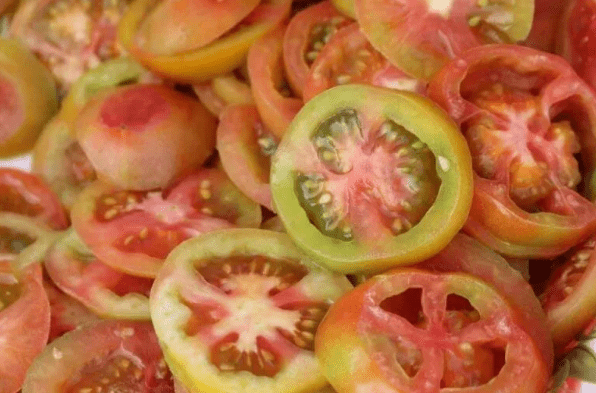 Red, yellow, green, pink, purple, bicolor, and even black are some of the tomato variations. Have you ever seen tomatoes, though, that are red on the outside but have a green tint inside?

The preservation of chlorophyll as a result of environmental stress on the plant during the fruiting phase is the main cause of the green inner color seen in tomatoes. The fruit’s interior color is acceptable and can be improved by ripening after harvest.

If you already have but are still unclear as to why some tomatoes are only internally green? Is it okay to eat them? and how to solve the problem. To learn more about tomatoes with green interiors, read the article.

Why are Some Tomatoes Green Inside?

Tomato cultivation is a difficult task. One of the most delicate plants, tomatoes are a friendly host to numerous bacterial and viral diseases.

A small error on your part could prevent your tomato plant from growing and developing as it should.

There could be a number of causes for red tomatoes that are inside green. It could be that the tomato isn’t yet fully ripe, disease, chlorophyll retention, or another factor.

What Causes Tomatoes To Be Green Inside?

The following are some causes of tomatoes’ internal greenness:

Your tomatoes’ interior greenness may be caused by environmental elements such as light, water, and temperature.

For instance, as we previously indicated, the green interior may indicate that your tomatoes have not yet reached full ripeness.

Because they mature from the inside out and love the sun, tomatoes require a lot of it to reach their full potential.

When tomatoes reach maturity, their outer layer first becomes rigid and turns red or another hue (depending on the tomato variety).

It’s possible that you harvested your tomatoes before they were fully ripe or that your tomato plant didn’t receive enough sunlight for it to grow healthily.

For instance, even before it fully ripens, the tomato variety Giant Crimson takes on a tint of pale red.

Environmental variables go hand in hand with this second cause.

The tomatoes’ seeds contain chlorophyll. It is a pigment that works to capture sunlight and is primarily responsible for the green color of plants.

Chlorophyll retention in tomatoes can be brought on by environmental variables.

That is the reason tomatoes change from their original green hue to red, depending on the type.

However, some environmental elements may cause the chlorophyll to persist (not breaking down completely). This could be the cause of your tomatoes’ inside green color.

Stress can also be the cause of tomatoes’ green flesh. Similarly to humans, plants experience several forms of stress.

the most notable one being environmental stress. Particularly as they transition from a colder spring to a dry and hot summer, tomato plants experience stress.

Tomato maturation can also be slowed down or prevented by both overwatering and underwatering. High winds, excessive heat, and nitrogen can all stress tomato plants, which leads to an underripe inside, even if the outside is red (depending on the variety).

Why Are Cherry Tomatoes Green Inside

Due to incomplete ripening, some ripened cherry tomatoes may still have green interiors.

The taste of the cherry tomatoes must be slightly compromised despite the fact that they may appear green inside.

Hacks for speeding up the ripening process of your cherry tomatoes:

Can You Eat Tomatoes That Are Green Inside?

The internet is rife with debates on whether it is okay to eat tomatoes that are green inside.

There is no need to be concerned if you are eating a kind that is designed to remain green inside even after fully ripening.

Unripe tomatoes, on the other hand, shouldn’t be eaten uncooked. Try frying some green tomatoes instead. That is a traditional Southern American dish made with unripe green tomatoes.

How Long Do Tomatoes Take To Ripen?

Tomatoes are grown in more than 7000 different types worldwide. Every tomato cultivar has a unique ripening window.

As a result, it will be challenging to provide an accurate timeframe for when a tomato will fully ripen.

She is a University of California, Davis Postharvest Vegetable expert.

Tips for ripening of tomatoes:

What Causes Green Seeds Inside Tomatoes

Similar to how tomatoes’ leaves do, their seeds also have chlorophyll. Additionally, the chlorophyll absorbs light and transforms it into nutrients for the plant.

Typically, the seed on the inside turns red as the fruit ripens and turns crimson on the outside.

The fundamental factor keeping the seed green even after the tomato becomes red on the outside is the retention of chlorophyll within the seed.

When plants experience external stress, such as osmotic shock, they have the ability to retain chlorophyll within their chloroplasts (water deficit). [Source]

The seeds are the least likely element of the fruit structure to emit chlorophyll when tomato plants are subjected to stress circumstances, such as drought.

This explains why, in some tomato cultivars, the seeds and other interior components are still somewhat green even though the exterior of the fruit appears to be ripe.

Is it Bad That the Fruit is Green?

As previously mentioned, environmental stress that the plant experienced during fruit production is the fundamental source of the fruit’s interior greenness.

This does not necessarily imply that the plant had a sickness that it passed on to the fruit, which could then damage the person eating it.

It all depends on how the plant responds to stress. The good news is that it still had sufficient health to produce a fruit with a high likelihood of being delectable.

Can you Eat a tomato with Green Seeds?

Green tomato seeds can be consumed without experiencing any negative effects. However, the flavor may be different from eating a tomato that has fully ripened.

A green tomato will have a tangier flavor. Green tomatoes have an acidic, occasionally unpleasant flavor. They might not be as juicy as a tomato that is fully ripe.

However, we advise putting the fruit covered in an aerated basket (not in the refrigerator) and letting it develop naturally if you want a greater flavor from the same tomato.

After a few days, the entire fruit should have the familiar pink to crimson color and flavor.

As we’ve seen, the tomato can sit after being harvested for a few days until the entire fruit and the insides are fully matured.

Ethene (or ethylene) gas, which is released by tomatoes, is a naturally occurring plant hormone that controls a plant’s growth and causes it to ripen by converting the starch it stores into sugar.

The green tomato’s characteristically acidic or bitter flavor will change into a deliciously sweet, juicy, and soft fruit.

How to ripen tomato on the tree or vine

The average time for a tomato to ripen is 6 to 8 weeks, though this might vary depending on the type.

70 to 75 F is the ideal temperature for ripening tomatoes.

The tomato usually ripens on the plant without any assistance, but occasionally there may be some that may take a little longer.

However, there are a few easy methods you may do to speed up the ripening process.

Note that the ripening process slows or occasionally stops when temperatures rise over 85 to 90F.

Any young, undeveloped blossoms and unwelcome suckers should be trimmed in order to speed up the ripening process.

This has the effect of forcing the plant to direct energy that was previously used to maintain these peripherals toward the ripening of the fruit.

One of the most widely consumed vegetable crops worldwide is tomato due to its rich flavor and health advantages.

There aren’t many people who don’t enjoy producing tomatoes in their gardens or who don’t like the delicious flavor of tomatoes.

But the most straightforward explanation for a tomato that is green inside is that it is either still unripe or a tomato variety that is supposed to be green inside when mature.

Why is it called a tomato?

Etymology. The Nahuatl word tomatl [tomat] pronunciation (help. info), which means “swelling fruit” as well as “fat water” or “fat item,” is the source of the Spanish term tomate, from which the English word tomato is derived. The tomatillo is a native of Mexico.

Why is tomato a fruit and not cucumber?

A fruit is an object that grows from a flower’s fertilized ovary, according to botanists. This means that in addition to apples, pears, peaches, apricots, melons, and mangos, other fruits include tomatoes, squash, pumpkins, cucumbers, peppers, eggplants, maize kernels, and bean and pea pods.

What is called tomato?

The tomato is an edible berry that is produced by the Solanum lycopersicum plant, also referred to as the tomato plant. Western South America, Mexico, and Central America are where the species first appeared. The Spanish term tomate, from which the English word tomato descended, was derived from the Mexican Nahuatl word tomatl.

Why tomato is a fruit?

Is a tomato a fruit or a vegetable?