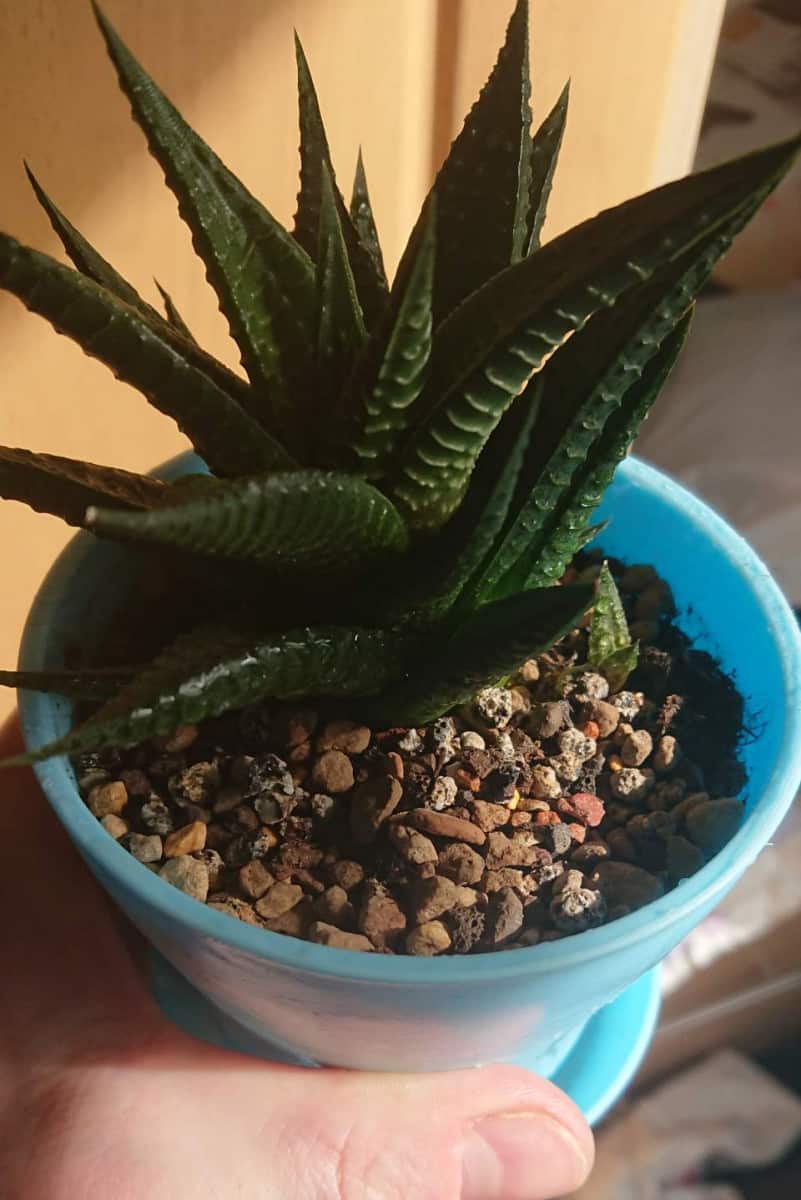 The ideal soil for indoor aloe vera plants is specifically designed succulent and cactus potting soil, which comprises inorganic material with a range of particle sizes to facilitate water drainage and lessen compaction around the roots. The ideal soil conditions of aloe vera’s native environment are replicated by soil from succulent and cacti plants.

Aloe vera should always be planted in pots with drainage holes in the base and should be grown in the proper soil to provide the ideal combination of moisture and dryness for aloe vera to flourish.

Continue reading to learn more about the best potting soil, why aloe vera shouldn’t be planted in regular potting soil, and how to keep aloe vera’s roots from rotting.

What Kind of Soil Does Aloe Vera Need?

The succulent aloe vera has evolved to withstand drought-like conditions in its original habitat on the Arabian peninsula.

Aloe vera plants naturally grow in stony, well-draining soils that do not retain a lot of water and enable any extra to drain out so that the roots are not buried in soggy earth.

Because aloe vera is used to dry conditions, overwatering and putting aloe vera in a potting mix that retains too much moisture around the roots can produce root rot, which is very dangerous.

Aloe vera should be planted in a mixture designed specifically for succulents and cacti, which closely resembles the ideal soil conditions for succulents.

Gritty succulent soil mixes have the proper ratio of nutrients that aloe vera needs and have a good aerated, porous structure that allows water to reach the roots of the plant while also draining away efficiently, greatly reducing the risk of root rot and mitigating much of the danger from overwatering.

There is no need for supplemental feed to boost the soil’s nutritional levels because aloe vera is not a heavy feeder and grows slowly while remaining healthy and compact in full sun.

Can you use Regular Potting Soil for Aloe Vera?

Aloe vera leaves typically start to turn brown or yellow when planted in regular, unimproved potting soil as an indication of stress from moist circumstances and finally die from root rot.

The next best option, if you don’t have access to succulent and cactus soil, is to plant aloe vera in standard, peat-free potting soil that has been improved with perlite, grit, or sand.

As they more closely resemble the gritty soil that aloe vera like, perlite and horticultural grit are superior soil additions for aloe vera than sand because they more exactly provide an areaeted structure and guarantee good drainage.

Make sure the mixture is at least 1 part potting soil to 1 part horticultural grit in order to offer your aloe vera with the proper amount of drainage and prevent root rot.

In order to reduce the risk of root rot and duplicate the recommended lower nutrients of the aloe vera’s natural soil, this guarantees that the soil not only drains well but also does not retain as much moisture for too long.

Do Not Plant Aloe Vera in Peat Soil

Aloe vera (or any succulent) should not be planted in potting soil that contains peat moss.

To replicate the natural cycle of moisture in their natural environment and maintain a healthy plant and prevent root rot, aloe vera needs the soil to dry out between waterings.

Peat soil, on the other hand, turns hydrophobic (repulses water) when it totally dries up, baking hard and causing water to run off the top, down the side of the pot, and out the drainage holes without reaching the roots of the aloe vera.

Due to this, the aloe vera experiences drought stress and is unable to absorb any moisture from the soil despite being watered (the aloe vera leaves turn thin and curl inwards).

However, because of the big particle size of the soil mix used for succulent and cacti plants, the soil continues to have a porous, open structure even after it has completely dried up. This makes it possible for the water to reach the roots and guarantees that the aloe vera maintains its moisture-rich, plump leaves.

The following are the most crucial elements for maintaining healthy aloe vera free of root rot:

Aloe vera grown indoors needs the right potting soil, which should cooperate with proper watering procedures and placing the plant in containers with drainage holes in the base.

The best way to prevent root rot and maintain the health of your aloe is with the proper potting soil, however it’s crucial to only water your plant once the potting soil is totally dry.

The aloe vera leaves stay supple and healthy by letting the soil dry fully before giving it a good soak to mimic the watering conditions in their natural habitat (read my article how to water aloe vera).

Feel the soil and the bottom of the pot at the drainage hole in the base to determine when the soil has dried out. If the soil is still wet, postpone watering for a few more days. The ideal time to water is when the soil feels dry.

A pot with a drainage hole enables excess water to freely flow through the potting soil and out of the container, allowing the soil around the roots to effectively dry in between watering sessions.

(Read my post on picking out the best containers for aloe vera.)