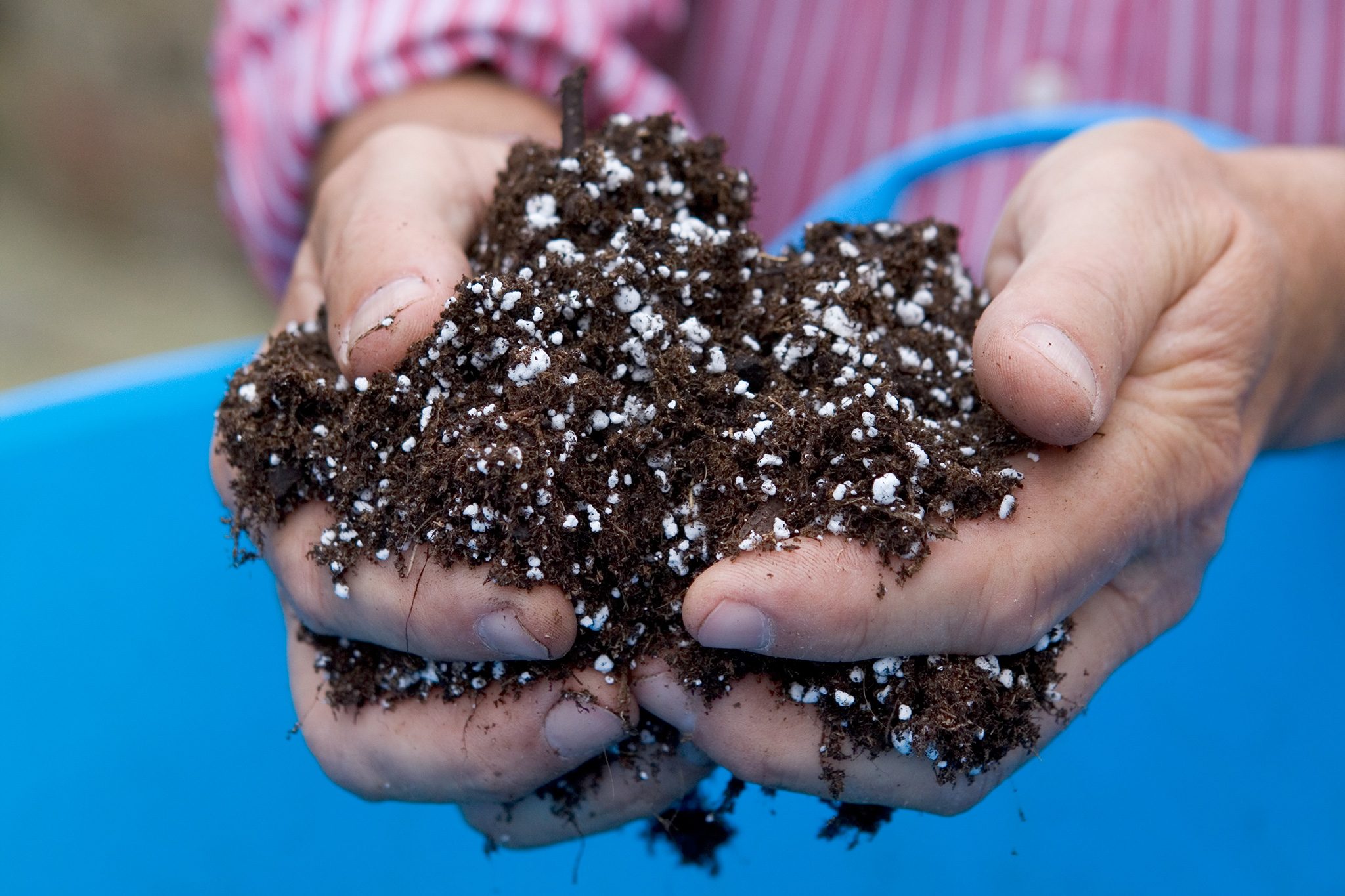 Natural volcanic glass known as perlite has gained popularity as a soil and garden mix addition.

Because it helps preserve moisture and nutrients, perlite is a fantastic addition to mature compost. When the compost is fully developed, it should only be utilized to improve the finished product because it also increases bulk and aeration. When perlite is added too early in the composting process, the compost will retain extra moisture.

When perlite, a volcanic glass, is fired in a kiln after being mined, it expands and develops minute pores throughout its structure.

Instead of rushing through the soil at a rapid rate like water would, the pores hold atmospheric water vapor, allowing moisture to slowly evaporate out of the soil.

This procedure lengthens the period that plants have access to the water they require to survive and lowers the rate of evaporation.

A naturally occurring mineral called perlite is used for a variety of things, such as soil amendment, insulation, and air filtration.

It frequently serves as a filler in potting mixes because it offers a light, porous environment for plant roots to develop.

Perlite can perhaps aid in aeration when added to compost, especially if the compost is not being churned frequently enough. If utilized too early in the composting process, though, this could cause some issues.

Recall that perlite helps hold onto moisture, which is negative for a compost that is flourishing.

When is The Best Time to Use Perlite on Compost?

Perlite works best when added to compost that has fully developed or decomposed and is prepared for use.

When your finished compost is ready, you can test it by digging deep into the center of the pile using a trowel or shovel. The compost is ready for usage if there is no odour.

After that comes filtering.

Even while it’s not always required to sift compost before spreading it in the garden, doing so ensures that only finished compost is incorporated into the soil and results in a superior planting medium without the lumps and clumps.

The compost has typically been sifted to remove the bulkier material at this point. There is still the lighter composted material, which over time may condense or cluster closer together.

The compost will continue to be aerated and beneficial for the plants it is meant for if perlite is added after the point of sifting.

Better potting soil and soil amendment result from the addition of perlite during composting!

When Not to Use Perlite on Compost

If the compost is still too wet, perlite is not advised for composting for another reason. Compost that has been wet tends to adhere to container walls and can clog drainage openings.

A buildup of moisture will hinder heat transfer and slow the decomposition process. Less than 20% moisture should be maintained at all times.

Maintaining the proper moisture content for composting will be challenging if perlite is used in excess amounts in the compost.

When perlite is used in compost, it will impact other plants if it was not stored properly or if it was applied to plants that were ill.

If the plants that were growing in the perlite may have been afflicted with a disease or may have had root rot, it is not advised to use it.

Fungi that easily spread through contaminated soil are the cause of root rot.

Perlite could make it easier for these diseases to enter the plants if your compost is afflicted with them.

How to Clean Used or Old Perlite

Due to the fact that perlite is composed of volcanic ash, it is filled with numerous microscopic holes. Because of this, it is absorbent and excellent at absorbing smells, pollutants, and nutrients from the soil.

Perlite must be cleaned before being used again since, in addition to nutrients, it may also contain contaminants like bacteria and fungus spores that can live in its pores or even on its surface.

For 20 to 25 minutes, you can soak the perlite in a solution of 1 part bleach to 9 parts water, then rinse it before using.

Oxidation, the process by which bleach releases oxygen molecules, is how it functions. The oxygen molecules released by bleach dissolve the chromophores’ chemical bonds. A color outside of the visible spectrum or no color at all is reflected by the modified chromophore molecules.

Chromophores are the atoms or chemical groups that give a substance its color.

It can be cleaned, dried, and then incorporated for subsequent usage into a mature compost pile.

The Benefits Of Using Perlite in Composted Soil

Perlite is renowned for its capacity to enhance soil air circulation. Because it is permeable, gases may leave while hazardous organisms can’t get inside.

Additionally, it lowers evaporation and aids in moisture retention.

As a result, it keeps the roots cool and stops them from drying up in warmer weather.

Perlite essentially enhances the environmental health of the plant.

It’s crucial to monitor how much fertilizer you use while putting perlite in soil. When too much nitrogen fertilizer is taken and retained, it might result in excessive vegetative growth and decreased fruit output.

– Because it holds moisture, perlite is beneficial for mature compost.

However, you shouldn’t add perlite to compost that is too wet.

Better potting soil and soil amendment are the ultimate results.

– Being so lightweight, perlite can be blown away and tends to float in excess water. It will be challenging to maintain the proper moisture level for composting if perlite is added in excess.

What are the disadvantages of perlite?

When used in compost, perlite will have an impact on other plants if improperly stored or used on plants that are unwell.

What happens to perlite when it gets wet?

If there is a chance that the plants that were growing in the perlite had a disease or had root rot, it is not advised to utilize it.

Is it OK to just mix the perlite on top of the soil?

Fungi, which can quickly spread through polluted soil, are the main cause of root rot.

Is perlite OK in compost?

Perlite may help these pathogens reach the plants more quickly if your compost is contaminated with them.

Should I mix perlite with soil?

Given that perlite is composed of volcanic ash, it contains a lot of little holes. Due to its ability to absorb odors, pollutants, and nutrients from the soil, it is excellent at doing so.