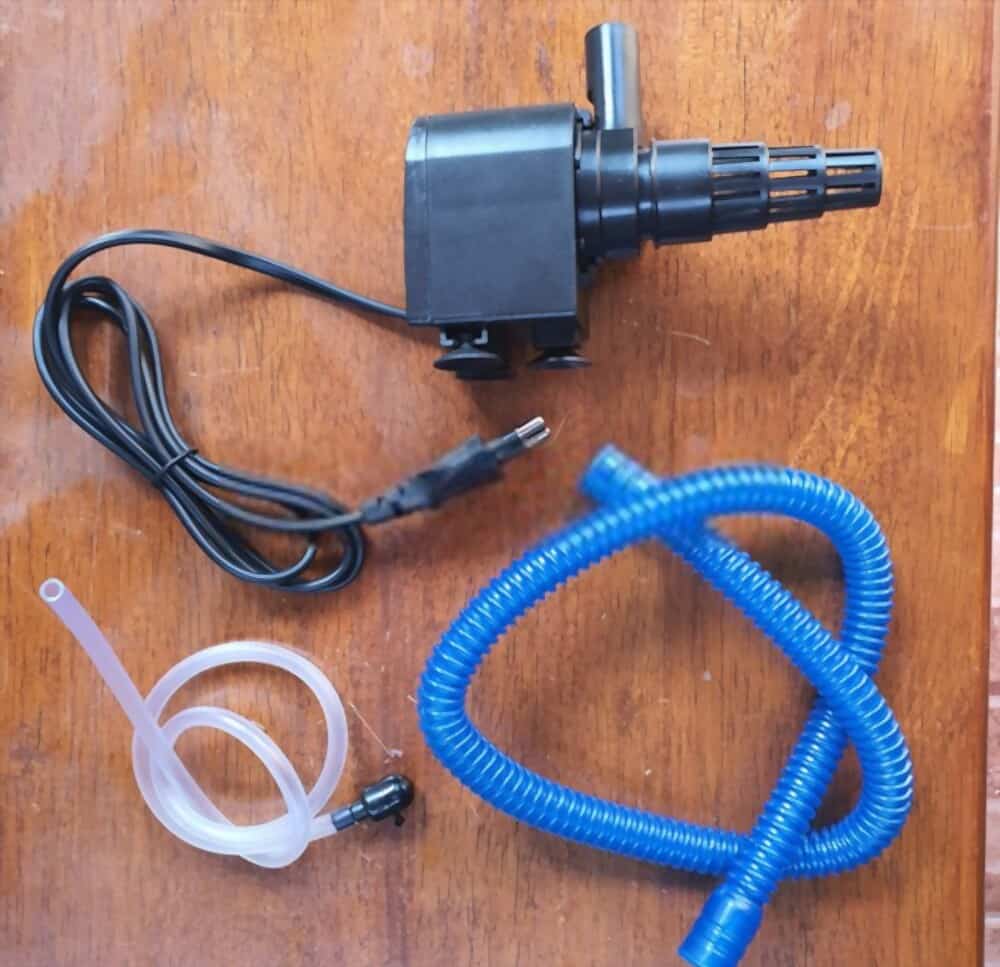 In an enclosed system with a closed-loop circulating system, aquaponic systems work by feeding plants nutrients made from fish excrement. Together, fishes, plants, and microorganisms build an ecosystem in which they can all flourish.

The flow rate (GPH), head height, power consumption, and pump placement are taken into consideration while selecting the best water pump for aquaponics and hydroponics. These elements affect how efficiently the pump moves water throughout the system.

Choosing the proper pump is crucial since it has a significant impact on how effectively an aquaponic system performs.

By having a basic understanding of the properties of a pump that affect its performance, you can choose the ideal water pump for your system with confidence. Read on then! Let’s find the appropriate pump for your hydroponics or aquaponics setup.

Build a successful system with these affordable equipment from amazon, that I’ve tried & tested on my setup.

What’s the purpose of a water pump in an aquaponics system?

In both aquaponics and hydroponics, water circulation is crucial. Pumps transport water from fish or nutrient tanks, where the fish are using the nutrients, to the plants.

The cycle repeats when the water returns to the tank where it is once more enhanced.

A pump works similarly to the human heart. When someone breathes in oxygen, their lungs take it into their blood, which is subsequently pumped to the rest of their body by their heart.

The same is true of aquaponics systems. The system will undoubtedly stop working if there is no intervention. Even if when the pump stops, which we will describe further in the essay, it is not a sudden death.

See our comprehensive guide on aquaponics to learn all you need to manage a system successfully.

after the water has had its nutrients removed. It flows into a sump where the pump is located. The pump is currently increasing the water’s pressure before sending it to the fish tank.

The waste created by the fish is then removed by the water as it passes to the fish tanks. The water flow from the pump controls how quickly the waste is taken out of the tank.

The biofilter receives the water that has accumulated little garbage. Since it provides the ideal conditions for their survival, the biofilter holds the majority of the bacteria in the system.

Here is a lengthy article explaining how a biofilter functions.

In the biofilter, a two-step process known as nitrification transforms the ammonia from the fish waste first into nitrites and subsequently into nitrates.

After reaching the plants, the nitrates in the water or nutrient-enriched water are utilised to promote plant development.

The cycle then continues.

How Flow Rate affects the Efficiency of the Pump?

The pump’s flow rate determines how quickly water is pushed out and circulated throughout the entire system.

Systems used for hydroponic and aquaponic farming are propelled by the movement of water. This water’s flow is expressed in gallons per hour, or GPH.

These are the units you will encounter when looking for pumps, and they play a role in evaluating which pump is best for your system.

The pump should be able to circulate all of the system’s water within two hours. In other words, if your IBC tank holds 250 gallons, your pump needs to have a minimum flow rate of 125 gallons per hour.

What can Affect Pump Flow Rate?

There are two things that can influence a pump’s flow rate.

Head Height – The head height is the distance from the water’s surface where the pump is located to the point where the water’s pipe is at its highest elevation before it reaches its destination.

Rule of thumb: The flow rate increases as the head height decreases.

Gravity is to blame for this. Imagine a tube of water standing vertically on a scale. The water column weighs more and rises to a greater level in the tube as more water is added to it.

As a result, the higher the water column rises, the more difficult it is to push the water out of the tube.

Applying this to the pump, the higher the water column goes, the harder it would be to pump the water out, resulting in less water reaching the pipe’s output.

Restriction – Similar to head height, even a tiny head height can make the pump ineffective and prevent it from producing the necessary flow rate.

Pipe size restrictions are one type of restriction. Similar to having a partially closed valve linked to the pipe, a small pump outlet pipe might restrict water flow.

It is advised to use water pipes of the same size as the fittings the pump ships with when connecting them. By doing so, constraints would be avoided and the pump would provide the desired flow rate.

Other variables, like a clogged suction input, can also limit the flow, therefore it’s important to keep the sump or container where the pump is located free of debris.

Different system types would call for various plant flow rates. To prevent waste from accumulating and clogging the fish tank, the filters and fish tank should both get the recommended flow rate.

I’ve discovered a customized system that keeps the flow rate in the fish tanks while adjusting the flow to the plants as needed. In my experience, this approach performed better than just letting the water circulate through the entire system because it produced a lot more vegetables.

This system gives you better flexibility for your farming needs by allowing you to adjust the amount of nutrient water going to the plants based on the size or type of system you may have.

The rate at which you feed water to the plants themselves cannot actually be valued. An illustration.

Since the rails are slightly tilted so that the water only trickles over the plant roots in an NFT (Nutrient Film Technique) system, the flow rate should be significantly lower than in a DWC (Deep Water Culture System).

The flow rate for DWC and grow beds can be lower or equal to the pump’s output without affecting plant development.

More fish waste might be collected from the tank and put into the mechanical filter if the flow rate were to increase. As a result, the fish are content and the tank is clear and clean.

This makes the mechanical filter’s flow velocity and ability to remove the heavier material from the system crucial.

Power usage is a significant factor in aquaponic and hydroponic systems. The pump for the system will be even more important to consider if the system is solar-powered.

For obvious reasons, you would want to use as little power as possible. Choosing the appropriate pump for the application is crucial since the cost of production will determine the viability of the entire unit.

Different brands would have varying power requirements. For comparison, I made a table with the top-selling pump brands on Amazon.

Both inline and submersible water pumps are suitable for use. For a while, both of these lineups had the desired outcome.

The in-line design can cause a buildup of sediment on the suction piping after some time in service. The suction must also be linked to the sump with a bulkhead or a uniseal when the pump is outside the sump. Over time, these connections have a tendency to leak.

The suction pipe also has its own restrictions because the pump’s performance may be impacted by its size.

On the other hand, submersible positioning of the pump inside the sump provides greater advantages than inline positioning. There isn’t any extra pipe present that could lead to issues when connecting it from the outside.

Without the filter cushion covering the suction, we advise setting up the pump immersed inside the sump. This is due to the filter pad’s propensity to quickly become fouled, which lowers the pump’s effectiveness.

Due to our testing, Hydrofarm Active Aqua is the best pump for an aquaponic system. A 550GPH pump was purchased for our 200-gallon fish tank. The pump has been operating for three years with minimum maintenance.

Although this pump is suggested for a 55-gallon system in the product. According to our expertise, the flow will be excessive for such a little system.

What can cause an Aquaponic Water Pump to Stop?

An aquaponic water pump may cease pumping for one of two main reasons.

Particularly in an aquaponic system, blockage in the pipes might cause the pump to cease pumping. The primary offenders are plant roots and leaf fragments. Usually, this can be avoided by performing preventive maintenance. A weekly glance into the sump typically works and helps prevent any accumulation in the suction piping, however you don’t have to always keep an eye on the pump.

What happens if the Aquaponic Water Pump Stops?

Both inline and submersible versions of water pumps are possible. Both of these lineups have the desired outcome for a while.

The in-line setup has the potential to cause sediment to accumulate on the suction piping after some time in service. Additionally, a bulkhead or a uniseal must be used to join the suction to the sump when the pump is located outside of it. Over time, these connections frequently leak.

The suction pipe’s restrictions are also due to the pump’s performance being impacted by its size.

Should you Repair a Water Pump or Buy another?

However, there are more advantages to installing the pump submersibly inside the sump as opposed to inline. No additional plumbing is there to create the issues that would arise when connecting it from the outside.

Our advice is to submerge the pump inside the sump without the filter foam covering the suction. This is because the filter pad frequently becomes fouled, which lowers the pump’s effectiveness.

Because it has been tried and proven by us, Hydrofarm Active Aqua is the best pump for an aquaponic system. For a 200-gallon fish tank, we purchased a 550GPH pump. For three years, the pump has been operating with little interruption or maintenance.

Why can Aquaponics Pumps be Submerged in Water without Failure?

The pump comes with:

robust construction for the mag drive

Can you use a fish tank pump for hydroponics?

Use both indoors and outdoors

What kind of pump do I need for hydroponics?

Environmentally friendly and free of oil

How do I turn my fish tank into a hydroponic system?

Aquaponic use is safe with no BPA.

What size air pump do I need for aquaponics?

What kind of pump do I need for aquaponics?