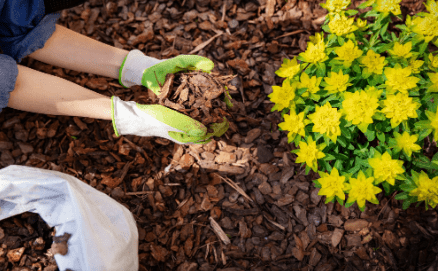 Strong gusts have the potential to blow some forms of mulch away, particularly when there aren’t adequate retainers to hold it in place.

Installing a protective blanket, edging, wind barrier, or using mulch glue will stop mulch from blowing away. Alternatively, you can lessen the likelihood of it being blown away by severe winds by using heavier mulches like crushed concrete, rubber shards, or even larger wood chips.

When mulch blows away, it can create an unsightly mess in addition to losing the mulching material that you may have spent money on and time laying down.

This article will outline many tried-and-true techniques you may use to stop mulch from blowing away without investing a lot of effort or money.

Why Does Some Mulch Blow Away?

Mulch is utilized to keep the soil’s moisture content high. Due to its lightweight, it can still be carried away by strong winds. As a result, lighter mulch is more prone to fly away than heavier mulch.

Mulch comes in a variety of natural and synthetic varieties. To prevent them from being carried away by the wind, you can add artificial mulches like boulders or other comparatively heavy mulches.

They’ll perform the job just fine because they’ll allow water and oxygen to pass through and reach the soil’s core, which will be beneficial to the plant.

Artificial mulch has the drawback that it won’t decompose over time to mix with the soil and add necessary minerals.

That would bring forth a new issue, right? What can you do, then? The best course of action in this case would be to use the wood chips as mulch, but they should be sufficiently large to resist being blown around by strong winds.

Pine barks are another option for mulching. The cause is identical. that they are sufficiently hefty to prevent wind from lifting them.

How To Keep Mulch From Blowing Away?

You can take precautions to stop it from blowing or at the very least lower the hazards. There are various techniques, such as mulch netting, wind barriers, edging, or moistening it as you apply. We’ll go over each one individually. Let’s start.

Mulch netting is the process of covering any form of mulch with a protective material to prevent blowing or overwatering.

Fiber, coconut fiber, and other inorganic components make up this shield. It is an approach that holds promise for protecting mulch, especially if you use lighter mulch, like hay or straw.

It is obvious that something becomes heavy and dense when water is applied to it or added to it. Thus, it is a great technique to make your mulch somewhat heavier and lower the chance of blowing.

It does, however, provide some challenges because you must maintain a delicate balance when watering it because too much water will make it thick enough to prevent both oxygen and water from going through. Additionally, because of the absence of hydration, weeds will be able to infiltrate it. So keep an eye out.

In order to create wind barriers, synthetic materials like trees or shrubs are typically used. The main objective is to lessen the wind’s force.

They efficiently keep the soil from eroding, give domestic animals a place to live, and make the soil more fertile. Additionally, they are quite practical and enhance the aesthetic of your yard.

This is a powerful strategy to stop mulch from blowing as well. During this procedure, you would need to dig all the way around the perimeter of the mulched area with a shovel.

You’ll expertly make it edgy. Then, one can set them on the edges using rocks, plastic, or other metal. They will act as barriers separating the wind from the mulch.

Mulch adhesive is one of the most straightforward methods for holding the mulch firmly in the ground. It only requires putting adhesive to the mulch’s underside, and the mulch will remain securely fastened.

Watch how one YouTuber prevents mulch from flying away by using some natural techniques.

How Do You Secure Mulch on a Hill?

What could be worse than applying mulch to a hilly location and worrying about it blowing away or slipping down?

In comparison to other places, steep locations have a considerably higher air or wind pressure. As a result, you must take specific actions to prevent the mulch from blowing away.

There may be numerous causes. They can be either rain or strong gusts, as well as mulches with subpar textures. One thing to bear in mind is that it will be harder for you to maintain the mulch’s integrity the higher your area is.

Avoid placing plastic under your mulch since it makes it easier for it to slide off the ground.

Additionally, you can employ the same strategies in hilly locations as you do everywhere, including edge fencing, netting, and other strategies.

Shredded bark mulch is the ideal mulch to use in steep locations. To prevent the winds from endangering your mulch and soil, you would need to cover it with some artificial fabric.

To cover the mulch, these nets are constructed of hand produced particles.

Because mulch slides off more easily the heavier it is, fencing is used to keep both moisture and mulch from running off a slope. So that is fairly easy.

The mulch will be surrounded by fences. How to erect and use fences around the mulch doesn’t need to be explained to you.

How To Mulch in Windy Areas?

You would need to select the ideal mulch for this project before mulching. There is natural and synthetic mulch, as you are aware.

These two primarily vary in that the former decomposes to benefit the soil while the latter does not. We shall discuss each separately.

The first type of mulch is natural, such as pine bark or wood chips. If you live in a windy area, you must take precautions to prevent the soil and its mulch from being blown away by the winds.

You must therefore use wood chips that are a little bit heavier than standard ones. To make it difficult for the winds to move or destroy them is the only justification.

As previously noted, you can use wind barriers that are positioned between the heavier mulch and the wind to keep it intact. You might also construct a little wall to reduce the wind pressure. And don’t forget to water it as needed.

The second is artificial mulches, like rocks. The boulders can be a great option to utilize as a windbreak because, as you are aware, they are hefty enough not to be blown away by the wind.

They allowed moisture and oxygen to pass through them and reach the soil’s core. The fact that synthetic mulches do not decompose to combine with the soil and benefit it should be taken into account.

Lighter mulches like hay or straw, compost, or leaves are great options for mulching because they are organic, will decompose eventually, and will help the soil.

However, because they are so light, the winds can readily move them, making them unsuitable for windy areas. Use of slightly heavier mulches is necessary to hold them in place because of this.

The substitutions for light mulch include:

What is the Best Mulch To Use on Hills/Slopes?

Before selecting a type of mulch, you must be aware of the height of the slope or hill you intend to cover with mulch. Determining whether you require a cheap mulch or one that decomposes slowly is important because these criteria will affect your decision.

Because it is less expensive than other types of mulch and takes longer to decompose than those other mulches, shredded bark is most frequently utilized on hills and slopes. Additionally, compared to rubber mulch or synthetic mulches, it is seen to be a more environmentally responsible solution.

Should You Mulch Every Year?

No! Mulch doesn’t need to be changed yearly. When the mulch is decomposing, however, and you are confident there is no other way around it, you should replace it.

Four to five is the most you can get if you want numbers. This indicates that if you are taking good care of the mulch, you would need to change/replace it after 4 to 5 years.

To maintain fertile, wet, and healthy soil in all areas of your garden, mulch is essential. But if you live in an area with a lot of wind, part of it will undoubtedly blow away before it needs to be replaced. There are numerous solutions to this issue.

I advise watering your mulch whenever it starts to get light enough not to be moved by the wind, but not too much so that it gets too dense and loses its ability to do what it was intended to do.

To maintain the flow of oxygen and moisture, which will prevent the mulch from flying away, I also advise using wood chips as mulch.

How do you get mulch to stay in place?

How do I keep mulch from blowing away?

Installing a protective blanket, edging, wind barrier, or using mulch glue will stop mulch from blowing away. Alternatively, you can lessen the likelihood of it being blown away by severe winds by using heavier mulches like crushed concrete, rubber shards, or even larger wood chips.

How do you wind proof mulch?

By planting wind barriers on the side of your garden where the predominant wind blows, you can support the windproof mulch. Conifers that grow quickly can significantly lessen the effect of gusts. As an alternative, construct a fence or a wall to block the wind.

What is the best mulch to prevent erosion?

It has been discovered that organic mulches, such as straw and wood fiber, are particularly good at halting soil erosion. As byproducts of the timber processing industry, bark chips and shredded bark are frequently utilized as landscaping mulches.

How can I keep mulch in place without edging?

You can add perimeter plants to help prevent the mulch from washing away. Hostas, sweet woodruff, creeping thyme, and other small border plants are some examples of these edging plants. Because they provide as a physical barrier for the mulch during the growth season, these plants are good for keeping it in place.