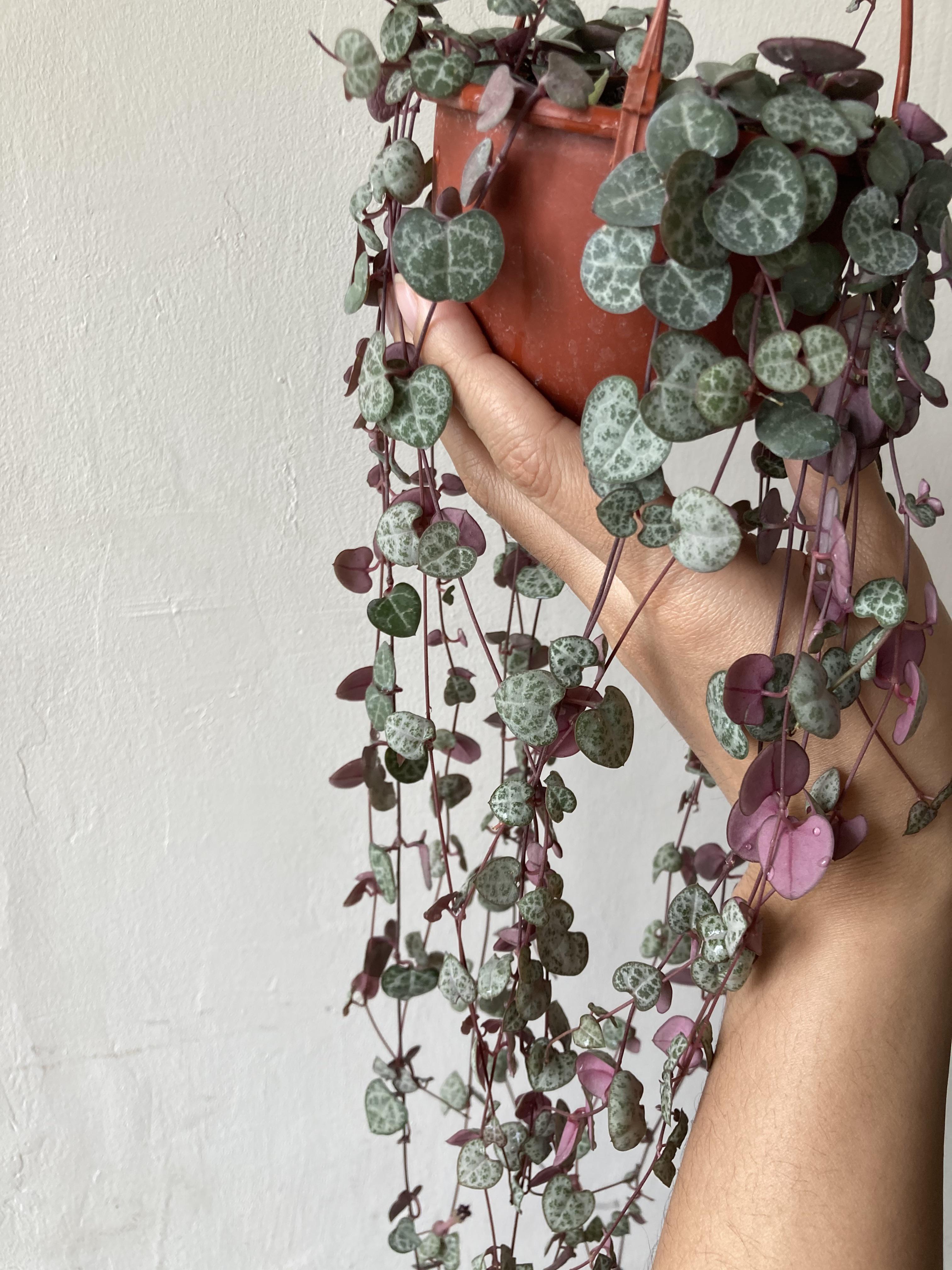 Twice every two weeks, water the heart string. Before watering again, let the soil dry out. String of hearts grows well at room temperature and in bright indirect light or partial sunlight inside. To avoid root rot and maintain the plant’s health, plant strings of hearts in the soil of succulent and cactus.

The string of hearts grows exceptionally well inside as house plants and requires very little maintenance.

To maintain your plant healthy, read on for the absolute best methods for growing string of hearts.

How Much Sun Does String of Hearts Need?

Although string of hearts are native to hot, arid areas, their delicate leaves make them unsuitable for full light all day if grown outside.

The optimal conditions for growing string of hearts are strong indirect light or morning sun followed by afternoon shade.

Avoid harsh full sun to maintain the plant’s vibrant color since string of hearts can be susceptible to too much sun, which can cause the leaves to scorch.

Southern African nations like Zimbabwe and South Africa are the original home of the string of hearts.

They thrive in rocky or sandy soils in their natural habitat, where there is little rainfall and little humidity.

Since they thrive in a dry indoor environment, string of hearts are particularly drought tolerant.

It’s crucial to mimic the soil moisture and irrigation patterns of the string of hearts’ natural habitat.

How Often to Water String of Hearts Plants

Soak the string of hearts thoroughly so that water drips out of the drainage holes at the pot’s bottom. Before watering your string of hearts plant once more to satisfy its water needs and prevent root rot, let the soil entirely dry up.

According to the temperature and the state of your home or garden, you should water your string of hearts plant approximately every 14 days. However, this can change.

How frequently you should water your string of hearts at home depends on how soon the potting soil dries out.

The best time to drench your string of hearts in water is when the earth is very dry.

How to Water String of Hearts in Winter

Due to shorter daylight hours and reduced light intensity in the winter compared to the spring and summer, the string of hearts is frequently dormant.

Since the string of hearts is not actively growing in the Winter, you should cut back on your watering schedule since this may make the plant even more vulnerable to root rot.

During the winter, water string of hearts once every three to four weeks to satisfy the plant’s reduced water needs and prevent root rot.

How Much to Water your String of Hearts

Always give your strong of heart plant a really generous soak to ensure that the water has adequately soaked into the soil and is available for the roots to absorb.

Only the top inch or two of the soil becomes moist when you water too lightly, which prevents the roots from accessing the water they need and causes drought stress.

When cultivated indoors, string of hearts, which naturally thrive in dry regions, are more susceptible to problems caused by overwatering than by underwatering.

The leaves of a string of hearts plant that has received too much water turn yellow, brown, or black, and the stems and leaves may feel mushy.

Reduce your watering frequency and allow the soil to totally dry out if this occurs to your string of hearts plant.

To assist prevent overwatering and root rot, replace the soil with succulent and cactus soil, which has good drainage and a porous structure.

It’s crucial to remember that excessively moist soil, pots without drainage holes, saucers and trays underneath pots that encourage water to collect around the roots, and other factors can also contribute to the symptoms of overwatering.

To guarantee proper drainage and prevent root rot, replace the soil with succulent and cactus soil.

(If your plant appears ill, read my post on how to resuscitate a string of hearts plant.)

The leaves of the string of hearts plant start to curl up if it is not watered frequently enough or only gently enough.

Draughts, air conditioning, or forced air in the home can make drought stress worse by removing more moisture from the leaves and causing the soil to dry up more quickly.

As the moisture that your plant is holding is used up, the leaves likewise appear thinner.

If this occurs, increase how frequently you water the plant (always make sure the soil dries out between bouts of watering to prevent root rot) and watch how quickly the soil dries, modifying your watering schedule appropriately.

The plant can recover in two or three watering cycles if you water generously and place the string of hearts in a more protected location away from high winds or excessive air currents.

(Read my article on how to water a string of hearts for the best watering techniques.)

Best soil For String of Hearts 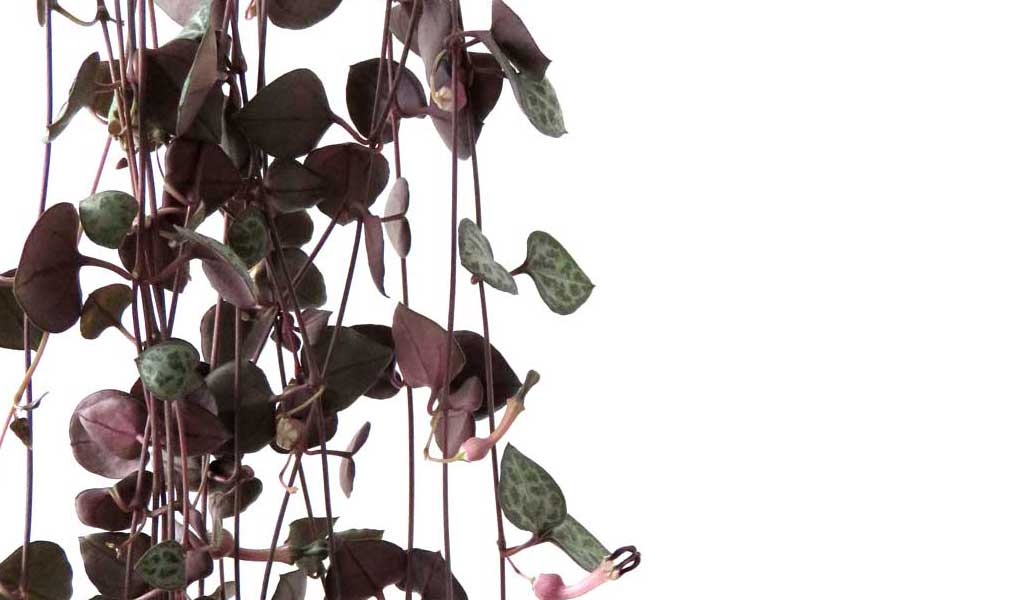 In contrast to most house plants, string of hearts does not prefer to be planted in potting soil that is kept damp for an extended period of time.

For this drought-resistant plant, conventional potting soil keeps too much moisture around the roots for an extended period of time, which results in the same symptoms as overwatering and can lead to root rot.

Pots and Containers For String of Hearts

Plant string of hearts in pots with drainage holes at the bottom to let extra water drain away that are in proportion to the size of the root ball.

The risk of root rot increases if the string of hearts is put in a larger pot with more soil capacity since the potting soil dries up more slowly.

Any sort of pot, including hanging baskets, can be used to grow string of hearts, although clay or terracotta pots are said to be the ideal since they are a bit porous, allowing the soil to dry more quickly than plastic pots.

Although string of hearts are tough plants that can endure some root entanglement in the container, you should ideally re-pot your string of hearts into a larger pot to avoid the roots obstructing the drainage holes, which can make the water drain too slowly.

In order to lower the risk of root rot, repotting is best done in the spring when the plant is actively growing.

Active Growth and Seasonal Dormancy of String of Hearts

Strings of hearts can withstand high temperatures in the summer but go into dormancy in the winter because to lower light levels.

Winter dormancy causes a dramatic slowdown in growth, which lowers the plants’ need for moisture.

It is crucial to stress that dormancy might make the string of hearts more vulnerable to overwatering, therefore in the winter only water once every three to four weeks.

When it’s warm outside and there is more light, like in the spring, summer, and fall, the string of hearts develops much more quickly.

Locate your string of hearts plant in morning sun, followed by afternoon shade, or in a South-facing window for more access to sunshine, if you want to encourage development.

Because they originate from hot, arid areas in Southern Africa, string of hearts can thrive in low humidity and room temperature interior environments.

If you reside in a colder climate, always grow string of hearts indoors because string of pearls are not cold hardy and can perish in frost (hardy to USDA zone 10).

Growth that appears limp, twisted, or darkened could indicate harm from the ice.

String of hearts can suffer from colder temperatures and does best in environments that are 59°F (15°C) or warmer.

Always place your string of hearts in warm, well-lit spaces, and keep leaves away from the windows to prevent damage from frost caused by a cold, frosted window on a Winter’s day.

Fertilizer for String of Hearts Plants 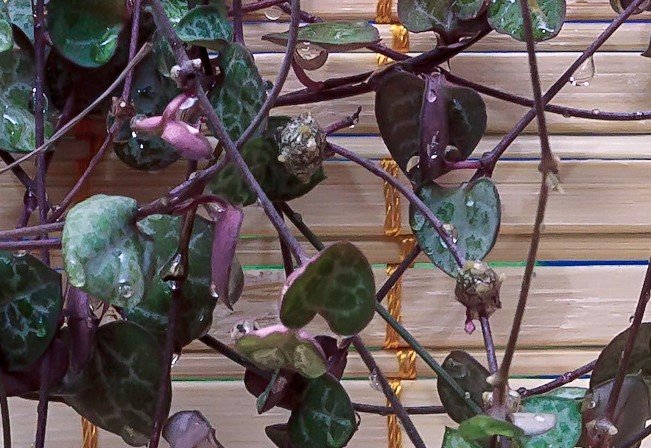 Although you should only feed succulents once a month in the growing seasons of spring and summer, fertilizer can be used to accelerate growth.

To avoid issues with overfeeding your succulents, I personally like to use a specialized fertilizer made for succulents and cacti (available at garden centers and Amazon). It has all the nutrients that string of hearts need in the right percentages.

In the winter, when the plant is dormant and not actively growing, avoid fertilizing.

Why does string of tears turn purple?

What causes it, then? If a String of Pearls is under stress, its leaves will become purple. Typically, a plant will respond to environmental stressors like sunburn, underwatering, overwatering, extreme heat, or pests and diseases by producing a pigment called anthocyanin.

Why did my succulent turn purple?

Purple or other color changes in succulents can occur naturally or as a result of stress. Stress can cause your succulents to turn purple or red, and the causes can include abrupt temperature changes, excessive heat or light, as well as a lack of food and water. Anthocyanin and carotenoids, two pigments, are what give succulents their purple or red color.

Why is my plant turning purple?

The most likely cause of a plant’s purple leaves rather than its usual green color is a phosphorus deficit, as you may have noticed. Phosphorus (P) is a mineral that all plants require to produce energy, carbohydrates, and nucleic acids. Compared to older plants, young plants are more likely to show symptoms of phosphorus deficiency.

Do string of hearts change color?

The temperature and seasons can also affect the color. The majority of succulents, like the String of Hearts, get more colorful as the weather gets cooler. The hearts are their most pink throughout the winter.