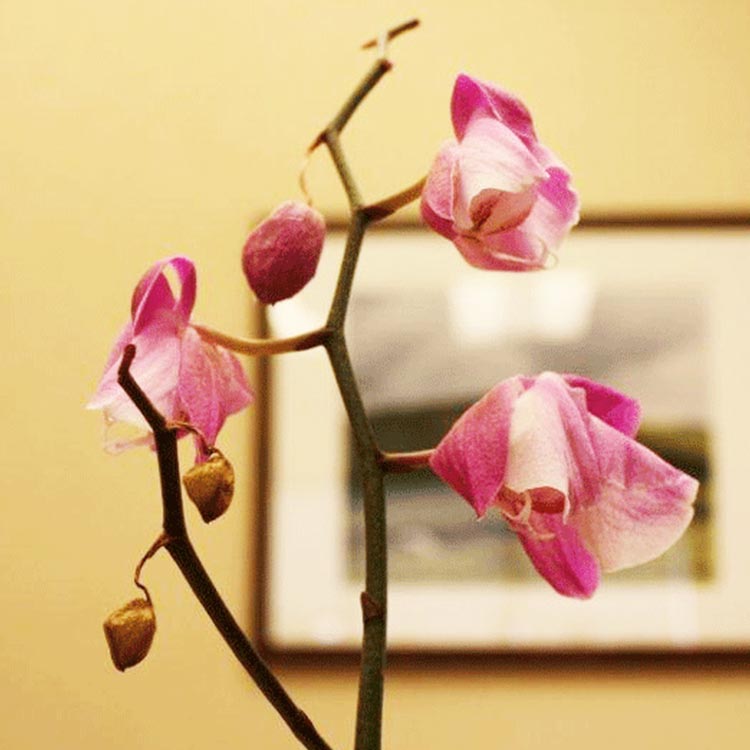 Overwatering or a potting material that is excessively compacted and contains too much moisture are typically the causes of orchid wilting. Orchids need air to move around the roots and have proper drainage. If the potting soil is too wet, the roots will die and the leaves and blooms of orchids will begin to wilt.

It should be emphasised that because orchids are sensitive to environmental change, they can wilt for a variety of reasons, including stress.

It’s crucial to establish the right conditions for wilting plants to recover, including greater humidity levels, indirect sunshine, weekly watering, and growing orchids in pine-based potting soil with adequate drainage and air circulation around the roots.

The following are the most typical causes of orchids wilting:

Continue reading to learn the causes of your orchid’s withering and how to remedy the issues to bring it back to life.

While orchids may endure temperatures outside of this range on occasion, a sustained hot or cold spell stresses the plants and causes the leaves and blooms to droop.

Temperature changes and low humidity are the two main causes of withering orchid blossoms. Because orchid blooms are extremely sensitive to unexpected temperature fluctuations, especially cold snaps, the blossoms may wilt and wither as a result.

If your orchid is on a window sill, the leaves may even be in contact with the window, which means the window frame may be considerably colder than the rest of the room, the orchid’s leaves and flowers may wilt as a result of the cold shock.

The most popular varieties of houseplant orchids (phalaenopsis moth orchids) are indigenous to tropical regions where they thrive in environments with humidity levels of at least 65%.

The humidity in homes is frequently significantly lower than 65%, and air currents from heat sources, draughty locations, and air conditioning units can all contribute to a climate that is too dry for orchids, causing their leaves and blooms to wilt.

Flowers and buds frequently wilt and drop off due to low humidity as well as cold temperatures.

Every time you water an orchid, it needs to have a really good soak otherwise the leaves will droop and shrivel. Normally, watering an orchid once a week is sufficient to meet its hydration needs and prevent root rot.

When orchids are watered too lightly, only the top inch of the potting soil becomes moist, the water does not get to the roots where it is needed, and the leaves and flowers begin to wilt.

Orchids Wilting Due to Overwatering

The most popular variety of orchid for indoor use, the moth orchid, is an epipthyes, which means that in its natural forest habitat, it grows on other trees or in soft, gravelly soil.

This implies that rather than having their roots sat in permanently soggy, compacted soil, orchid roots prefer environments where air can flow around them and water drains away relatively rapidly.

Due to the fact that they mimic the specialised, well-draining conditions to which the roots of orchids have become acclimated, pine bark-based potting mediums are the finest for growing orchids.

Orchids are extremely sensitive to overwatering and having their roots in soil that retains too much moisture and restricts the flow of oxygen around the roots, which causes the roots to rot and die and makes them unable to transport nutrients and water to the leaves, causing the leaves to wilt and turn yellow.

You are probably overwatering orchids if you give them water more than twice a week.

If orchids are grown in pots without drainage holes or if saucers or trays beneath the pot are collecting water, the potting media will remain constantly damp, which may lead to root rot, the plants may also wilt and exhibit other signs of overwatering.

(To learn how to save orchids with root rot, read my post titled Why is my orchid dying.)

If orchid leaves are kept in the same potting medium for too long, they may begin to wilt. To provide proper drainage and to let air to circulate around the roots, orchids need a loose, open structure in their potting medium. Potting mixtures eventually breakdown, retain too much moisture, and block oxygen.

This can become a problem even if the orchid is planted in the correct wood bark-based potting mix.

Even when kept indoors, organic matter decomposes over time (much like a compost pile). Because of this, any existing potting material for orchids, including pine bark and moss, degrades to the point that it no longer has the same open, well-draining structure that orchids need.

The potting medium can retain a lot more water after it has broken down and suffocate the roots, which require more air and even light than most plants do.

The leaves and blooms of an orchid might wilt if the roots are starved of oxygen because the potting medium has dissolved or they are surrounded by materials that retain too much water.

In order to maintain the health of the orchid roots and stop the leaves from drooping, it is best practise to repot your orchid every two years in fresh potting soil based on pine bark.

How to Revive a Orchids with Wilting Leaves and Flowers 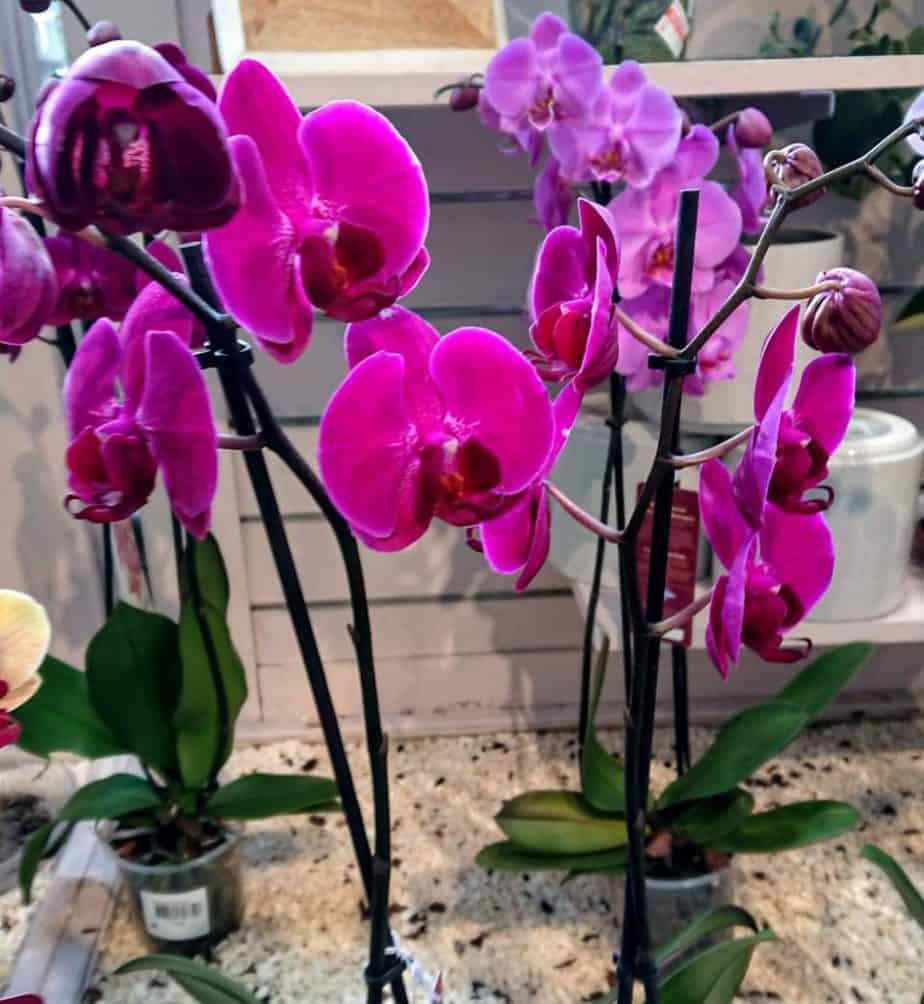 Wilting leaves and flowers are a symptom of stress since the orchid doesn’t like the environment, thus rescuing a wilting orchid usually involves identifying the environmental stressors and addressing any issues to create the ideal habitat for your orchid in your house.

It can take a while for orchid blossoms to recover once they have wilted or fallen off.

Once the environment has been changed to be more conducive for the orchid, orchid leaves typically recover more quickly.

To learn more about watering orchids at different seasons of the year, read my post on how to water orchids. If your orchid appears to be dying, read my article on how to resuscitate a dying orchid.

Planting the orchid in the incorrect potting medium, transplant shock, or overwatering are the causes of orchids drooping after repotting. Because they are sensitive to environmental changes and take some time to get used to a new environment, orchids frequently momentarily wilt as a symptom of stress.

The most frequent cause of orchid wilting after repotting is incorrect potting material selection, which is overly compacted, absorbs too much moisture, and prevents airflow around the roots.

Because they are epiphytes, orchids grow on other trees in the forest canopy.

As a result, they have evolved to thrive in soil that quickly drains and allows air to flow around the roots.

Regular potting soil does not have an areaeted structure that allows oxygen to reach the roots as quickly and absorbs too much moisture, which might inhibit efficient root respiration (and causes wilting orchid leaves).

Moss is another material that is frequently used as a potting media for orchids, but when it decomposes, it might retain too much moisture for the roots of the orchids, which causes the leaves to wilt and turn yellow.

Planting orchids in pine bark is the best way to mimic the conditions they would experience in the wild because the size of each piece of pine bark is large enough to create enough space throughout the potting medium, allowing air to freely circulate around the roots and water to drain effectively to prevent root rot. The exact arrangement of a forest canopy, however, is too difficult and impractical to replicate indoors.

Be sure your new pot has drainage holes in the base and that any saucers or trays underneath the pot are routinely emptied of extra water when you repot your orchid.

Orchids Leaves and Flower Wilting Due to Transplant Shock After Repotting

Orchids frequently wilt because individuals transfer them to different locations when they repot them, which is a common cause.

Because they acquire accustomed to their current environment, orchids frequently react by momentarily withering if their growing conditions suddenly shift.

Sunlight, a regular watering schedule that should be adjusted based on the season, and protection from draughts and major temperature changes are all preferences of orchids.

Your orchid may temporarily be unable to absorb water as effectively as it adjusts to the conditions in its new pot and potting medium if you have recently repotted it and moved it. This is due to the orchid having to deal with new environmental conditions and interference with the root system.

The orchid wilts due to dehydration if the roots are unable to absorb moisture as effectively and you have transferred the orchid to a room with a higher average temperature or an area with more sun.

How to Revive Orchids Wilting After Repotting 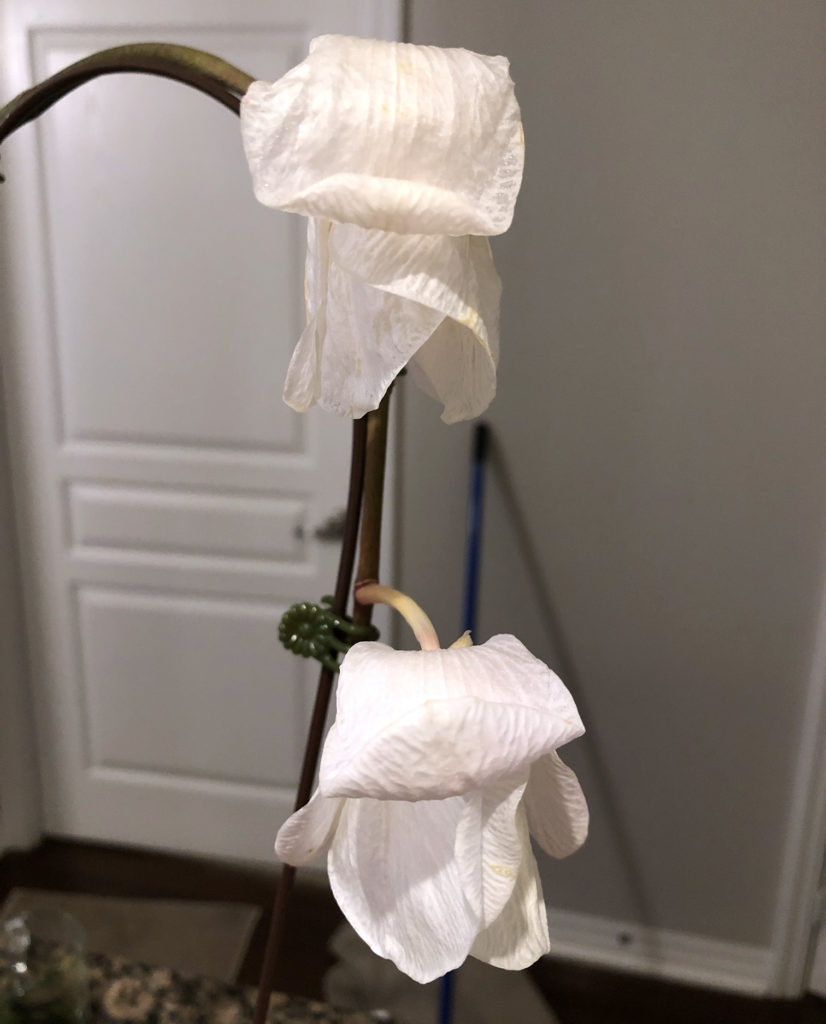 Your orchid should be able to recover after repotting if you provide the right atmosphere for it and generally replicate the habitat of the species.

(Read my post on selecting the best orchid pots.)

Should I remove wilted orchid flowers?

Reduce the fading blooms while the orchid is still in bloom. Removing the finished orchid blossoms can keep your plant looking tidy and will also give it more life. Cut the branch cleanly and evenly all the way to the main branch. Continue doing this while the plant is in bloom.

Where do you cut an orchid after the flowers fall off?

Look for a node under the lowest flower bloom for strong, green spikes. Trim the orchid spike 1 inch above that node or hump. Cut all the way down to the plant’s root system if the spikes are sickly or brown. 2 days ago

When should I remove orchid flowers?

It’s time to pull the flower if the flower spike is drooping, discoloured, and has brownish borders. Numerous orchids have multiple blooms on a spike-like stem.

Should I remove drooping orchid flowers?

It’s time to pull the flower if the flower spike is drooping, discoloured, and has brownish borders. Numerous orchids have multiple blooms on a spike-like stem.

When should I cut the flowers off my orchid?