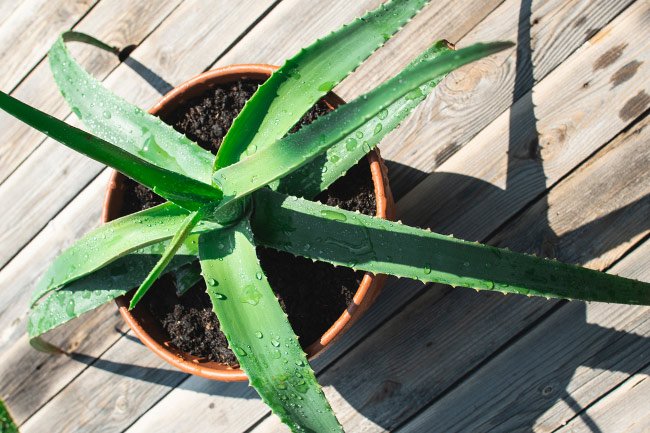 Aloe plants with drooping leaves typically have too much shade on them, which is the problem. Aloe plants require plenty of bright, direct sunlight. Overwatering and poorly draining soils cause root rot in aloe plants, which causes its leaves to turn dark and droop.

If an aloe plant is replanted into a much larger pot, the leaves may droop because the larger pots hold more moisture. To prevent drooping leaves, aloe plants need the soil to dry out between waterings.

Aloe plants with drooping leaves can be saved by moving them to a place with more sunlight, repotting them in pots that are proportionate to their size, using well-draining soil, and pruning back any drooping leaves that become brown and mushy.

Learn why your aloe is drooping and how to rescue it by reading on.

Lack of sunshine is the most frequent cause of drooping aloe plant leaves. Aloe plants have evolved to thrive in bright environments that include some direct sunshine. The leaves of the aloe get lengthy and droopy if it receives too much shade, which makes them fragile and prone to drooping from their own weight.

Aloe plants are indigenous to hot, arid areas in Africa and the Arabian Peninsula, where they have evolved to thrive under high temperatures, bright light, optimal 6 hours of direct sunlight, low rainfall, and well-draining soils.

In order to mimic the conditions of the aloe plant’s natural environment, aloe plants should always be grown in bright light with some direct sunshine, whether they are being grown indoors or outdoors.

Your aloe plant will prioritize growing its leaves toward the strongest sources of light if it is not grown on a window sill in direct sunlight but rather in some relative shade. This will give your aloe plant a leggy appearance and weak, drooping leaves that will eventually droop down due to their own weight.

If aloe plants are not routinely turned, they may also droop. Aloe plants can become unbalanced and topple over or droop to one side because they grow in the direction of the brightest source of light.

How to Save a Drooping Aloe Plant

Usually, placing an aloe in a bright area can assist to rejuvenate the plant and largely restore its appearance if it is drooping due to being slightly too shadowed.

However. No matter how much sunlight an aloe receives, if it has been in the shade for too long and some of its individual leaves are excessively drooping, they will not stand up properly.

If the leaves are still drooping after more than a few weeks of vigorous development (Spring and Summer), I advise trimming each drooping leaf down to the plant’s base using a sharp pair of pruners.

The aloe may now focus its attention on generating new leaves and nurturing the healthy leaves that are not drooping because the cut site should callus over in two days.

I advise taking cuttings of the leaves or offshoots for propagation if all the leaves are drooping. The leaves that are drooping can be readily multiplied, producing a plant that is healthy and does not droop.

Watch this instructive YouTube video to learn how to grow aloe vera plants from cuttings of offshoots:

Aloe plants grow naturally in rocky soils with a -deluge of rainfall followed by a time of drought- cycle of watering, which does not keep much moisture and drains rather rapidly.

Aloe plants are hence much more sensitive to excessive watering and soggy soil than most plants.

Replicating these elements of the aloe natural habitat with well-draining potting soil and watering only when the soil is dry is crucial for maintaining healthy aloe plants.

Aloe plants are commonly planted in conventional potting soil, which retains too much moisture, and are overwatered.

Aloe plant parts become dark and mushy and droop because of the moist environment around its roots.

(If you’re unsure, see my post on how to determine if your aloe plant is underwatered or overgrown.)

Remember that pots lacking drainage holes in the base or failure to empty saucers, trays, and decorative outer pots of excess water can also result in moist soil.

Aloe plants do not like cold temperatures below 50°F since they raise the danger of root rot and cause their leaves to become mushy and droop.

How to Save a Droopy Brown Aloe Plant

Depending on the environment, the season, and whether the aloe is indoors or outside, you may need to water your plants more frequently or less frequently. Read my article on how often to water aloe plants to determine the best watering schedule for your particular aloe plant.

Aloe plants are much more resilient than most people realize, and they may handle having a large leaf removed without any issues, especially if the leaf is drooping, dark, squishy, or rotten. You can either trim the leaf back to its healthy, solid growth or all the way to the plant’s root system.

During periods of active growth, new leaves should appear (Spring and Summer).

I advise replicating the aloe leaf from a cutting to save the plant if major portions of it are drooping and brown and it doesn’t seem to get better.

(Read why my aloe plant is dying in my article.)

After repotting, aloe plants frequently droop because the soil retains too much moisture around the roots. Aloe plants require soil that drains properly and closely resembles the soil in their natural habitat. Regular potting soil holds on to moisture too long, stressing out the aloe and causing it to droop.

Aloe plants naturally grow in sandy, well-draining, porous soil that does not keep much moisture and permits oxygen around the roots for respiration. Aloe plants are drought resistant.

If the potting soil is compacted around the roots of the aloe when it is repotted, the aloe may not be able to tolerate it. This would limit the oxygen available to the soil and slow the rate at which the soil drains after watering, both of which are detrimental to the aloe plant and could result in drooping leaves.

Repotting aloe plants should only ever be done into pots that are one size larger than the old one.

Larger pots may carry more soil, which means they can hold more moisture around the roots of the aloe plant. The potting soil dries out much more slowly in larger pots than it did in the aloe’s previous container, this encourages the development of root rot, which can color the aloe dark and make it droop.

Due to a lack of drainage holes, saucers, trays, and attractive outer pots, water collects in the base of the pot and leads to root rot, which causes the aloe leaves to become brown and droop.

How to Save a Drooping Aloe Plant After Repotting

The aloe plant should start to recover during the next several weeks once you have repotted it in the proper pot with well-draining soil and determined the ideal watering frequency for the new conditions.

Consider reproducing the aloe leaves from cuttings or any off-sets if the leaves continue to droop and develop brown, gooey patches, as these symptoms are an indication of root rot.

(Read my essay on how to save an aloe vera plant from extinction.)

How do you fix droopy aloe plant?

Replant your aloe in a pot that is heavier, deeper, and more stable so it will be supported. Aloes that lean tend to be simple to remedy, but if you’ve tried fixing these problems and your plant is still drooping, you might want to stake it or divide it into smaller plants.

How do I know if my aloe plant is overwatered?

If your aloe plant develops what are known as water-soaked areas on the leaves, which appear soggy and soft, you know it is being overwatered. The leaf nearly seems to become completely soaked with water before turning to mush.

How do I know if my aloe plant needs more or less water?

In general, watering an aloe once a week is sufficient; however, if plants are subjected to intense heat and sunlight, a touch test is required. The simplest technique to determine if the soil is too dry is in this way. Put your finger into the ground just past the second knuckle. The plant needs water if it is dry.

1 thought on “How to Save a Drooping Aloe Plant”