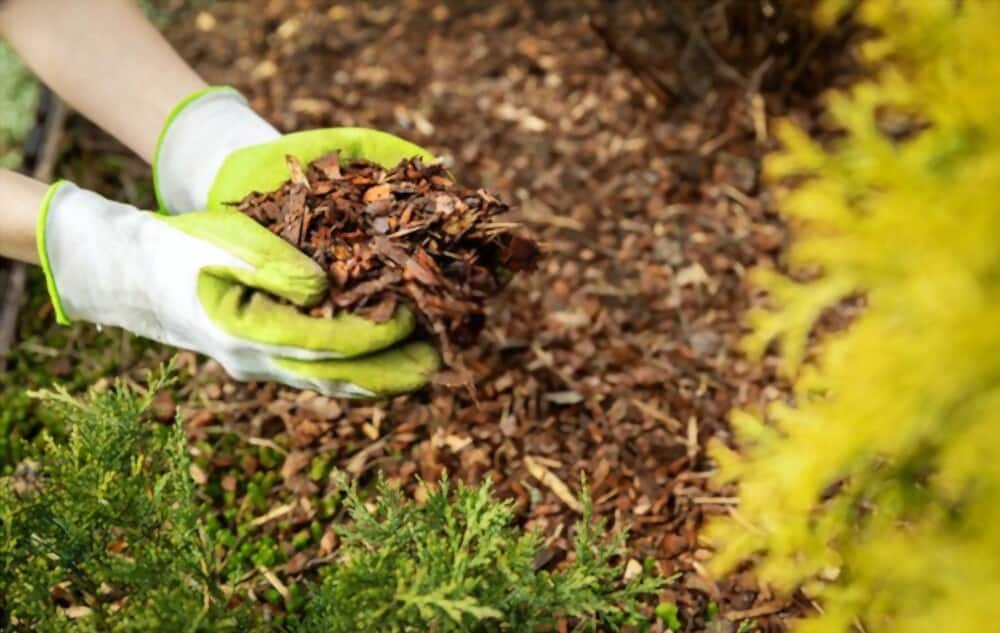 Mulch is used to nourish plants, prevent weed growth, and keep the ground cool and moist. Mulching has many advantages, but what happens when it gets too old or rotted? It may now be incorporated into the soil.

To help improve the soil’s organic content, old mulch can be added. In addition to creating a healthy soil structure and improving drainage and aeration for the roots of the plants, the aerobic breakdown of the mulch by the bacteria and microorganisms will enrich the soil with beneficial nutrients for the plants.

In this post, we’ll go over the advantages of mulching the soil, how to go about it, and the different kinds of mulch you may use.Â

We will also go through some other factors to think about to make sure your plants receive the full benefits of the mulch.

Can Old Mulch be Mixed into the Soil?

Old mulch can be incorporated into the soil to help improve its organic content.

However, when doing this, there is one thing to keep in mind:

Since the bacteria and microorganisms utilize nitrogen to break down the wood chips, there would initially be a shortage of nitrogen in the soil when the process started.

This would momentarily deplete the nitrogen levels in the soil-based plants. Due to a lack of chlorophyll, they will begin to exhibit nitrogen deficiency symptoms, including yellowing of the leaves.

The organic matter is consumed by the decomposers, and the nitrogen in the deceased creature is changed into ammonium ions. The nitrifying bacteria subsequently transform the ammonium into nitrates.

Depending on the soil’s state and microbe population, this procedure typically takes between two and six months.Â Â

The nitrogen is used by the microorganisms during the breakdown process, after which it is released as ammonium nitrate back into the soil.

When the wood chips are broken down, plants will flourish since they adore this.

Lack of oxygen in the soil might cause the mulch to decompose anaerobically, which will result in some really unpleasant scents.

Check out our post to learn what makes soil smell unpleasant.

Here is a good solution that I have tried and tested that is reasonably priced if you need to replace your old mulch.It’s located right here!

What are the Benefits of Mixing Old Mulch into the Soil?

Old mulch can be incorporated into garden soil for a variety of reasons. The garden is getting more organic materials, which is a good thing.

As it decomposes, old mulch releases helpful bacteria and fungi into the soil.

Compost that is highly rich in organic matter will be created by the bacteria and microorganisms. This improves the habitat for the natural population of beneficial flora and fauna in the soil and helps to produce healthier, more disease-resistant plants.

Increase Drainage and Aeration in the Soil

Compost can facilitate better soil drainage. In the process of decomposing the mulch, bacteria and microbes produce a substance called compost.

Additionally, the natural population of beneficial plants in the soil, such as earthworms and insects, will have a much better environment as a result of this. These organisms move through the soil, helping to aerate the pores and improve drainage.

Increase Nutrients In the Soil

As was previously said, applying mulch to the soil acts as food for bacteria and other microbes to feast on. As a result, the mulch will enrich the soil with additional nutrients that the plants may utilize.

See our in-depth article for more information on how adding mulch to soil can improve its microbiological health and organic content.

How to Till Mulch into the Soil

A shovel is required for this.

Without damaging the roots of your plants, try to bury the mulch as deeply as you can. Making ensuring there are no lumps or clumps of mulch in the soil is crucial.

Mulch and dirt combined: a winning combo Old mulch frequently contains branches and twigs that have fallen from trees and shrubs.

Is Old Mulch Bad for Plants?

Mulch is not good for plants, according to one of the most widespread myths about it. Actually, if you use the right kind of mulch and apply it properly, it may be quite beneficial to plants.

The soil can be amended with old mulch, which will decompose into nutrients for the plants. It may also be left unattended while fresh mulch is spread over it. The old mulch will eventually decompose into the soil with time.

Mulch can benefit plants by :

Mulch, however, can be a useful tool for gardeners who wish to produce a stunning view, a charming façade, or even a safer atmosphere for their home from pests like fire ants.

You should think twice before incorporating any kind of inorganic mulch into the soil because it won’t improve the soil’s drainage or aeration or provide any helpful nutrients.

Our recommendations for mixing old mulch in the Soil.

Mulches composed of synthetic materials, such rubber mulch and landscape cloth, are referred to as inorganic mulches. For information on removing old landscaping fabric from garden soil, see this article.

These mulches do not degrade over time, and even if they did, the toxins they contained might seep into the soil and harm plants.

In addition, the toxins may find their way onto your plate through the fruits or vegetables. To avoid any unintended consequences, you should only think about incorporating organic mulches into the soil. Knowing what kind of mulch you have is a good place to start.

Too much of anything, as they say, may be harmful. Likewise with mulch. The plants may experience issues if there is too much mulch on the soil. It will decrease air flow, which could lead to poor soil aeration and possibly harm to the plants.

If you do decide to use mulch, be sure to pick one that is light, spreads well, and decomposes over time.

Keep in mind that while each type of soil is unique, not all mulched soil is the same. Also, don’t forget to combine food-grade mulches with compostable mulches and other garden materials, or hardwood mulch with softwood.

Mulch piles around plants can also attract insects and rodents, giving them a place to hide and build nests.

Additionally, too much mulch may keep moisture in the soil that might otherwise evaporate. Root rot and other issues with plants might be brought on by this moisture retention. 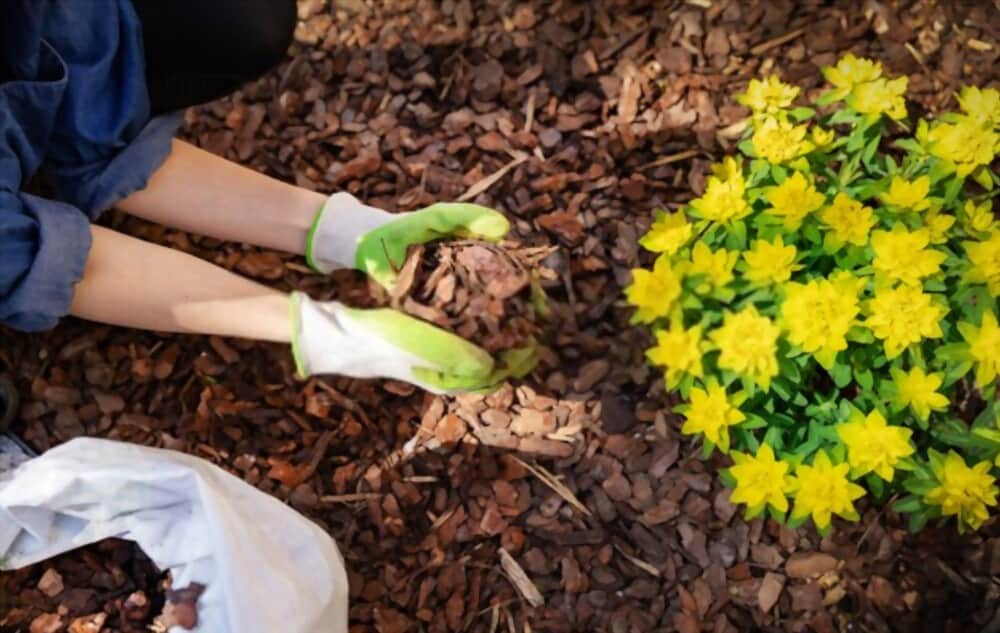 Can I mix mulch with potting soil?

Mulch can be included in potting soil, but keep in mind that the soil you use shouldn’t contain any fungicides or pesticides.

Additionally, you should incorporate smaller amounts of mulch into potting soil and give it time to decompose. This will aid in preventing pest issues and ensuring correct drainage for the plants.

The time allotted for the modest amount of mulch to decompose in the potted plant will stop the sporadic nitrogen deficiency caused by the heightened bacterial activity brought on by the mulch decomposition.

Make sure not to add any inorganic mulch to your potting soil because they won’t help your plant in any way.

Only decorative inorganic mulch should be left on top of potted plants.

You may read more about the advantages of covering potted plants with rocks in our in-depth post.

Do I Need to Remove Old Mulch before Adding New Mulch?

Before adding fresh mulch, the old mulch does not need to be removed. You must watch out, though, that as new mulch is added, the pile of existing mulch doesn’t obstruct the soil underneath.

In addition to causing excessive moisture retention in the soil, a layer of mulch that is excessively thick can also cause the soil to retain heat on warm days.

You should incorporate some of the mulch into the soil and remove the remainder so that it can be composted for later use. This will prevent the effects of forming a soil barrier.

Will Weeds Grow through Mulch?

Keep in mind that mulches other than those listed above, such as Stonewool, lava rocks, pebbles, or cordwood, can also kill weeds.

Can you till over mulch?

Yes, Till the excess mulch into the top 2 to 4 inches of soil using a shovel. Make sure the soil completely encloses the old plot. Spread out a fresh layer of mulch thinly over the compost that has just been added.

Should you remove mulch before tilling?

Before tilling the soil and adding compost to an annual bed, remove any existing mulch. It may be tempting to simply put more mulch on top of an existing layer of mulch when mulching a perennial bed, but doing so can lead to rot, nutrient starvation, and plant death. Prior to adding new layers, take out as much of the older ones as you can.

Can you rototill old mulch?

Now you understand why the initial advice was to remove the old mulch by raking it away. The old mulch would have been trampled under when you rototilled or spaded the compost into the garden, requiring you to buy and use new mulch. That is a waste of time, effort, and resources.

Is it necessary to remove old mulch?

Mulch from the previous year shouldn’t be thrown away, according to seasoned gardeners. Mulch eventually decomposes, supplying the soil with valuable nutrients and other organic matter. Every year, removing old mulch results in extra labor and unnecessary costs.

How do I turn over old mulch?