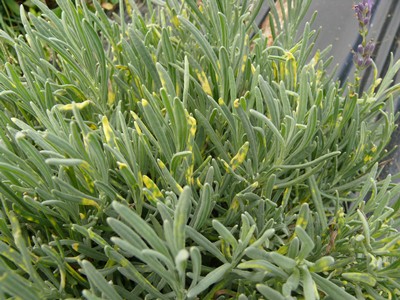 It is most likely an indication of stress brought on by too much nitrogen in the soil if the leaves of potted lavender are turning yellow. Lavender needs soil with low to medium fertility. Lavender leaves will become yellow if nitrogen fertilizer is introduced, or if manure or enriched compost are used, and the plant will frequently become leggy and produce fewer blooms.

Yellow leaves may also be a sign of overwatering, of lavender being in an unfavorable environment for air circulation (lavenders abhor stagnant air), or even of an acidic soil.

Lavenders are indigenous to dry Southern Europe, where they grow well in coastal regions with alkaline, low- to medium-fertility, sandy soils that do not retain moisture and little rainfall.

Replicating aspects of their natural environments is vital to keep lavender plants healthy and show blossoms by preventing the leaves from turning yellow.

Learn the cause of your potted lavender plants’ yellowing leaves and how to remedy the situation by reading on.

Yellow leaves are frequently a sign of an excess of nitrogen in the soil mixture. A potting mix with low to medium fertility is ideal for lavender plants. Lavender plants will turn yellow and yield fewer flowers if the soil contains too much nitrogen.

If you’ve planted your lavender plants in pots with…

…or anything comparable, the nutrient-rich soil combination is incompatible with the minimal fertility requirements that lavenders have, which causes yellow leaves.

Other symptoms of stress include fewer summer blooms and lanky, unkempt growth.

Before planting, enrich the soil as a solution.

The ideal potting soil for lavenders is readily available at any reputable garden center, is well-draining (to prevent root rot), and contains around a third of horticultural sand or grit and a second-third of regular potting soil.

(For additional information on how to make the best potting soil for lavenders in pots and containers, see my post.)

In nations like Spain, France, and Portugal, lavenders thrive in sandy soil mixtures that mimic those conditions.

Lavenders will flourish in soil that is low to medium in fertility, producing more flowers and having green, fragrant leaves.

You need to be patient because it could take a few weeks for lavender plants with yellow leaves to recover after being moved to a new potting soil, but it should.

2. Leaves Turning Yellow Because of Fertilizer 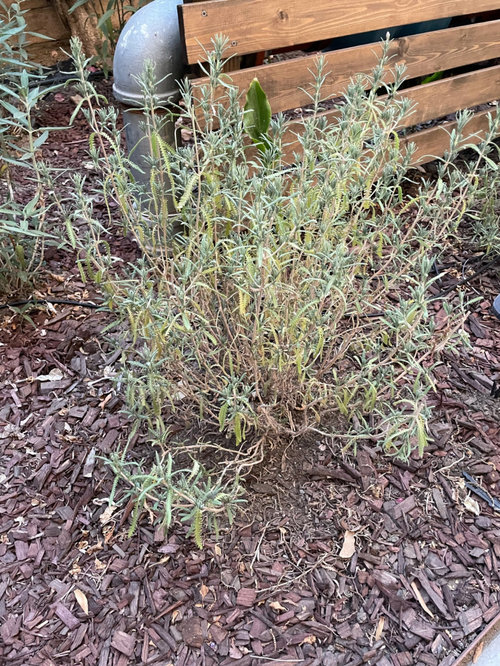 Fertilizing lavender plants will have an identical effect to growing them in nutrient-rich soil, if not a worse one.

The yellowing of the foliage, fewer summer blossoms, a less potent perfume, and an untidy look are the first signs of stress from more fertilizer.

The only thing you can do after fertilizer application is replant the lavender in a new container using a potting mix made of sand or gravel.

Use horticultural sand or grit to supplement the fresh soil since its larger particle size will result in a more porous soil that promotes good drainage and root respiration.

3. Root Rot Because of Over Watering

There aren’t many illnesses that afflict lavenders, although root rot can be a problem since…

Every two to three weeks, potted lavender plants need to be given a thorough soak. You are probably overwatering the lavender if you are watering it more frequently than this.

(Read how often to water lavender in my article.)

Lavenders are heat and drought tolerant plants that want the soil to become completely dry in between waterings.

Constantly wet soil will foster the growth of the fungus root rot, which can turn lavender leaves yellow or brown and frequently give the plant a droopy aspect.

Even if you do not routinely water your lavender, the soil may be overly rich and retain a lot of moisture. Before planting, always add a liberal amount of sand or grit to the potting mix to ensure proper soil drainage.

Even if the plant is overwatered or receives a lot of rainfall, your lavender has a far lower chance of developing root rot if the soil is sandy.

The remedy is to dig out the lavender from the ground and, using sterile pruners, cut off any roots that appear to be yellow and decaying, leaving only healthy, regular roots.

Lavender should be replanted in fresh potting soil with lots of grit or sand and let two weeks to dry out.

The benefit of growing lavender in a pot is that you can relocate it to a protected area where it won’t get wet, allowing the roots and soil to dry out.

Water the lavender once every two to three weeks till the fall after the first two weeks (do not water lavender in Winter as it is in a state of dormancy and will attain all the moisture it requires if left outdoors).

However, there is a strong possibility the plant will recover adequately if you act soon. Lavenders do not always recover from severe root rot.

If a lavender plant is placed in a pot that is too tiny and restricts its root growth, it may cause its leaves to turn yellow as a symptom of stress.

Even if it is a lesser type of lavender like Lavandula angustifolia ‘Hidcote Superior’ or Lavandula stoechas ‘Anouk, plant it in a pot that is at least 12 to 16 inches across.

This size container will guarantee that the lavender’s root system has adequate room to spread out and that the soil inside the container has enough moisture and access to nutrients.

Additionally, a larger pot will have more soil to keep the roots warm during the winter.

To understand more, see my post on choosing the best pot for lavenders.

Pots without drainage holes in the base or the use of a plate to absorb water dripping from the pot’s base are potential issues as well.

The soil will be excessively wet for the roots of the lavender if extra water cannot quickly drain out of the pot’s base. The lavender will have root rot as a result, and its leaves will become yellow or brown and droop in general. 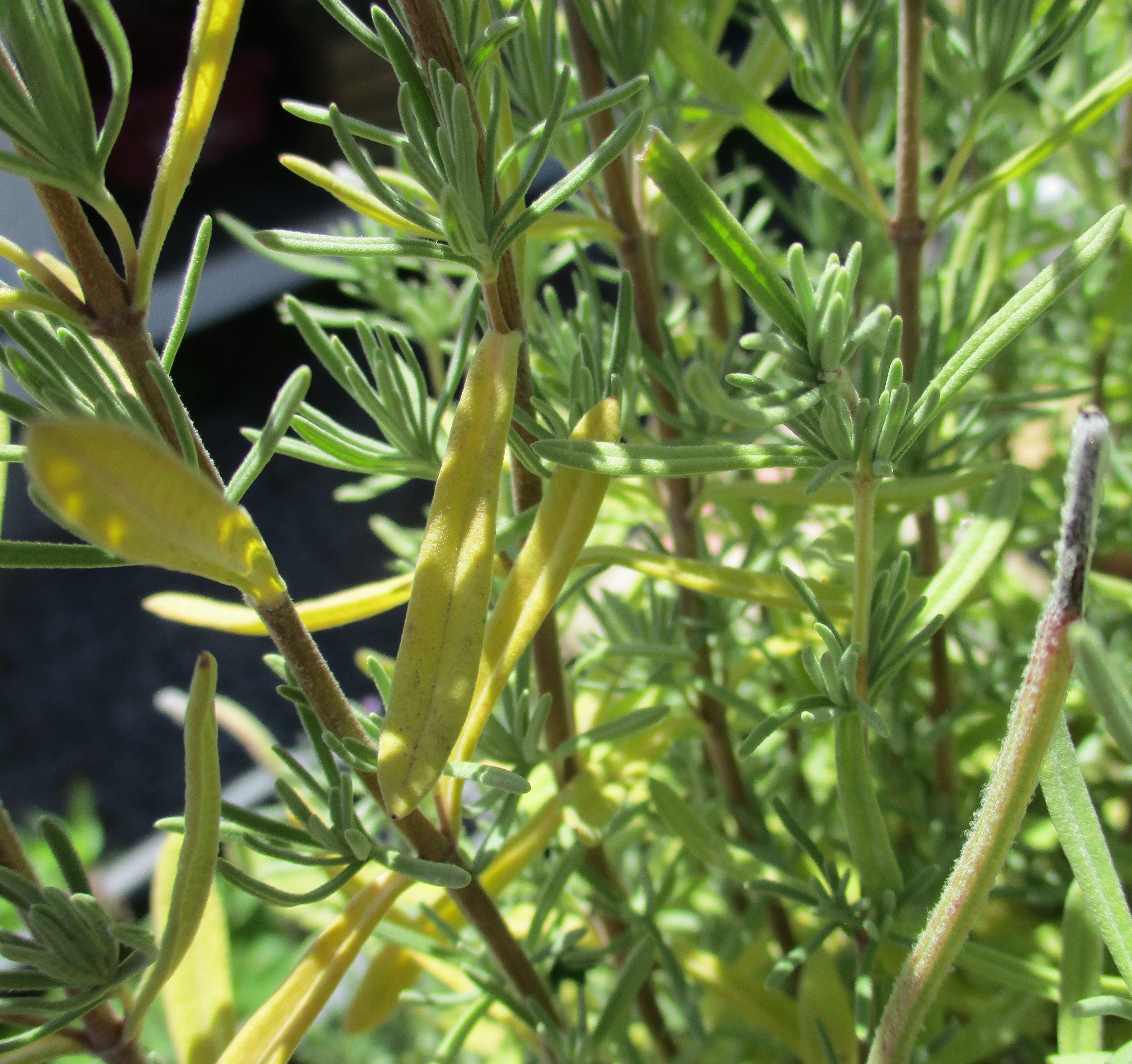 When lavender is grown in an acidic soil mixture, it may struggle to absorb nutrients, leading to yellow leaves and limited development.

Lavenders should be planted in regular potting soil; avoid using ericaceous (acidic) compost. The soil mix for lavender will be within the ideal range by adding a tablespoon of horticultural lime, which is available from garden shops or online, or half a cup of wood ash, both of which are alkaline.

If you suspect acidic soil is the issue, remove lavender plants from the soil immediately, and transplant them in new soil with some lime to offer the lavender the best chance of recovery.

(Read my post on how to cultivate lavender in containers and pots.)

How do you revive a dying lavender plant?

Lavender Revival Techniques. If root rot is thought to be present, remove the affected roots and replant the lavender in a soil that drains well. Make sure your lavender, whether it is in a pot or not, gets six to eight hours of sun each day. Until the top inch (2.5 cm), water deeply. 13 April 2022

How do you bring lavender back to life?

Lavender Revival Techniques. If root rot is thought to be present, remove the affected roots and replant the lavender in a soil that drains well. Make sure your lavender, whether it is in a pot or not, gets six to eight hours of sun each day. Until the top inch (2.5 cm), water deeply. 13 April 2022

Lavender that has been overwatered may exhibit yellowing leaves, first on the bottom leaves. Dropping, a decaying smell, and obviously soggy soil are additional signs that a lavender plant needs to be watered less. Lavender that is not receiving enough water will droop, and the soil will feel entirely dry.

How do you fix Overwatered lavender?

Overwatering is a typical issue that leads in root rot, which kills lavender plants. To rescue the plant, you must act fast if you suspect root rot. Pruning any impacted roots after removing the plant from the ground. Replant the lavender in a soil that drains properly after that.

How do you fix yellow leaves on lavender?

You can amend the soil with sand or grit to make it less fertile, fertilize your plants less frequently, or repot your potted lavenders into a new pot with the proper medium if your plants are turning yellow due to an excess of nutrients in the soil.