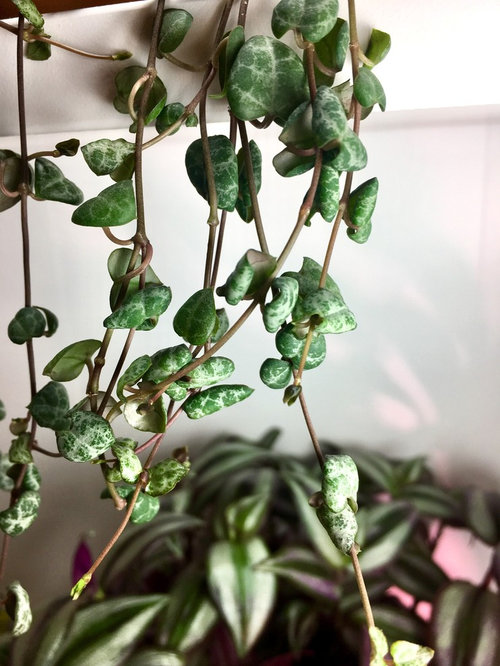 If they are not watered frequently enough or too lightly, the plant will deplete the leaves’ reservoirs of moisture, causing them to curl up and wilt. Strong air currents and excessive sunlight can also dry out string of hearts plant leaves, making them appear thinner and curled up.

When soil dries out, it can occasionally resist water from the top, preventing the roots from reaching moisture and causing the leaves to curl.

Continue reading to learn about the best potting soil to use and how to apply the treatments to stop the string of hearts plant’s leaves from curling.

String of Hearts Leaves Curling due to Drought Stress

The leaves of string of hearts plants, however, can still curl and shrivel as a symptom of dry stress if they are not watered frequently enough or too lightly.

Typically, string of hearts plants need a deep soak of water once every two weeks.

While string of hearts can thrive in a somewhat dry climate, it should be noted that when it does rain, it usually pours down in a deluge rather than a light drizzle.

Therefore, if you water your plants too lightly, the water will simply moisten the top inch or two of the soil and won’t permeate the soil to the roots.

When the plant is healthy, the leaves should be rather voluminous because this is a survival tactic to retain moisture in an environment where rainfall can be sporadic.

The leaves become thinner, withered, and curled as a symptom of stress when there is not enough water, either because it is not applied frequently enough or it is applied too lightly.

Fortunately, with proper watering techniques, it is typically simple to revive your string of curled-leaf hearts.

The string of hearts plant should begin to recover after two or three watering sessions.

Establishing the proper watering schedule for your climate and the conditions in your house will help to keep the plant healthy and prevent the leaves on string of hearts plants from curling due to dehydration or overwatering.

Give the soil a good soak, then keep track of how long it takes for the dirt at the bottom of the pot to dry out to determine how frequently to water string of hearts plants. Feel the soil via the drainage hole on the pot’s base to do this.

Delay watering for a few days until the soil is dry if the soil seems wet. This is the ideal time to water with a good soak after the soil has just begun to dry out.

(Read my article on how to water a string of hearts for the best watering techniques.)

Dry Soil can Prevent Water from Reaching the Roots 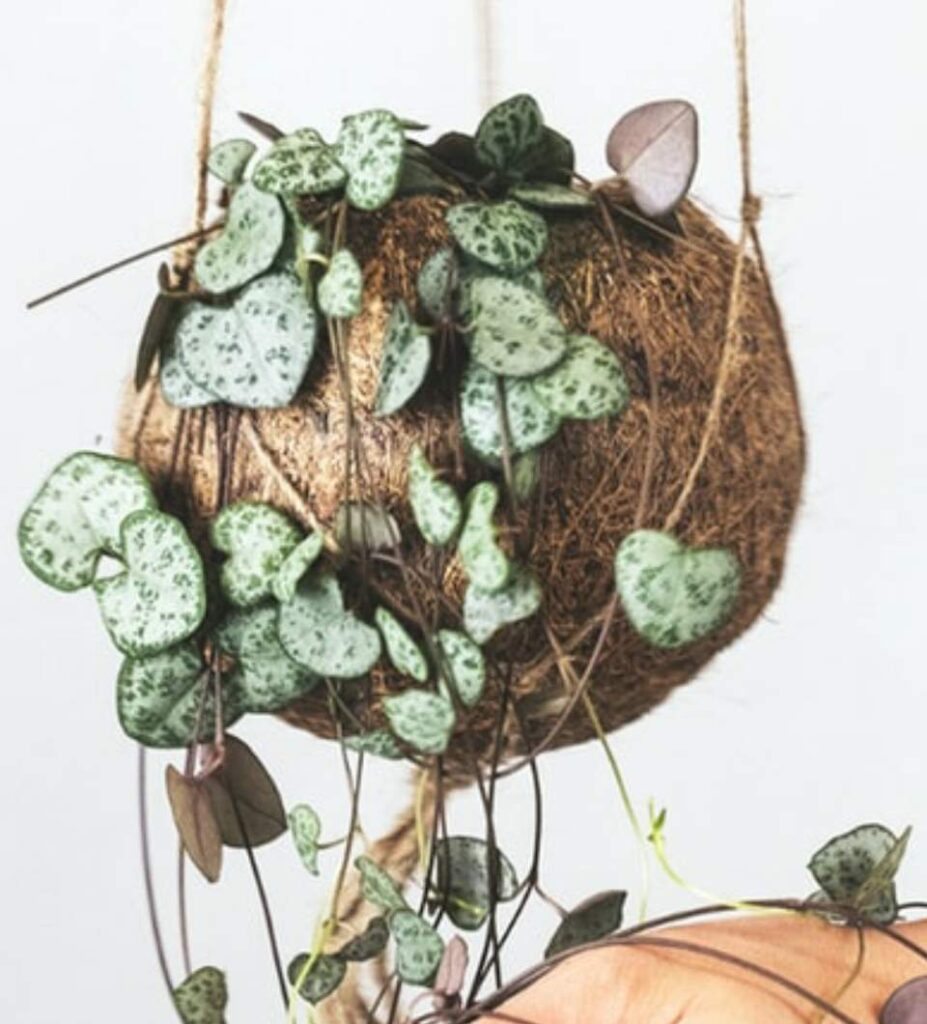 If the string of hearts is planted in potting soil that contains peat, this could be an issue because peat can become hydrophobic (reject water) when it dries out entirely.

Water may run down the top of the potting soil, down the edge of the pot or container, and out of the drainage pores in dry peat soil.

This may give the impression that the string of hearts plant has received adequate watering, but in reality, the water has not adequately permeated the soil and reached the plant’s roots, causing the leaves to curl as an indication of drought stress.

The first step in reviving a string of hearts plant with curling leaves caused by soil that repels water is to:

The curled and dry shriveled leaves can recover from drought stress with good succulent and cactus soil, watering with a generous soak each time you water, and watering once every two weeks or such.

Too Much Sun Causes Leaves to Shrivel

The leaves of the String of Hearts can withstand some exposure to direct sunshine, which can tint them a purple color, but too much can cause the leaves to curl and even burn.

For string of hearts plants, a combination of morning sun and afternoon shade during the hottest part of the day—or bright, indirect light while indoors—is ideal.

Because the soil dries out quickly and the leaves lose more water through transpiration, too much sun can cause the leaves to dry out as the plant fights to absorb adequate moisture.

If the leaves have curled, move your string of hearts plant into a bright indirect light area so it won’t have to deal with the stress of direct sunshine while it heals.

Wait until the soil is completely dry before giving the string of hearts plant another good soak, letting any extra water drip out of the drainage holes in the pot’s base.

The string of hearts plant should begin to show indications of recovery after two or three watering sessions.

(Read my post on how to resuscitate a dying string of hearts plant if your leaves are burned or the plant appears unwell.) 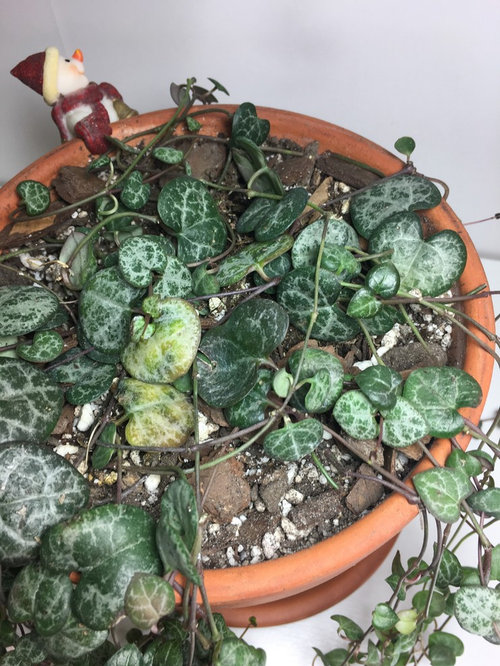 However, if the plant is in the direct air current of air conditioning, the dry air can zap moisture from the leaves and speed up the drying of the potting soil. String of hearts plants can thrive with some air flow.

As a result, the string of hearts plant’s reservoir of moisture is depleted, causing the leaves to thin out and curl up.

Simply place your string of hearts away from the direct route of air currents that dry the leaves and in an area of your home with bright indirect light to solve the problem.

The string of hearts can start storing water again in their leaves after two or three watering cycles, allowing them to recover from being curled or shriveled.

(To keep your plant healthy, see my post on how to care for string of hearts plants.)

Why are my string of heart leaves curling?

Curling leaves. Lack of light is one cause of the leaves on the String of Hearts curling, but other causes include the plant’s normal growth process or animal damage. The growth of the chain of hearts is slower indoors, and the leaves do not develop as thickly as they do outdoors.

How often do string of hearts need water?

Consistently hydrate. Once or twice a week in the spring and summer, water. Water the plant every two weeks in the fall and winter when it is dormant. Ensure that the soil is completely dry between waterings. Overwatering can cause root rot and the yellowing of leaves.

How do you get the string of hearts to grow straight?

It’s really simple to root a chain of hearts in water. Simply submerge a number of cuttings that are a few inches long in water. The portion of each cutting that will be submerged in water in your glass or vase should be free of leaves. This will help protect the leaves from going bad and keep the water fresher.

How do you know when strings of hearts need water?

A good sign to look out for is when the leaves of String of Hearts plants start to wilt and appear a little wilted and deflated. This is because the leaves retain water.

1 thought on “String of Hearts Leaves Curling? (How to Solve it)”