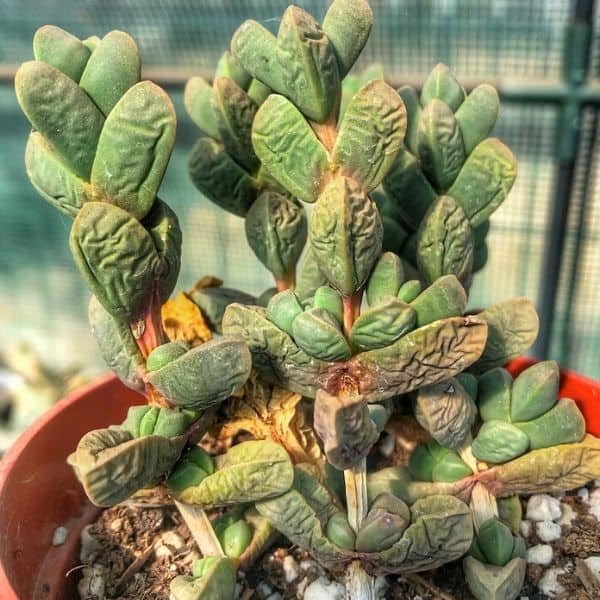 Because they are either overwatered or underwatered, succulent leaves shrink. Between waterings, succulents require the soil to completely dry out. The stress makes the leaves shrivel, turn yellow, and become mushy if the soil is wet. Succulents that are underwatered shrink and turn brown.

Underwatered leaves shrink and eventually turn brown, whereas overwatered leaves also turn yellow, black, or translucent and have a mushy texture. This is the main distinction between succulents that shrivel from too much or too little water.

Testing the soil for moisture will give you another indication of whether the succulent is being overwatered. If there is any moisture present, feel the soil with your finger via the drainage hole in the container.

Shrunken leaves can be caused by either overwatering or underwatering the soil, depending on how wet it is.

Read on to learn how to rejuvenate succulent leaves that have been shriveled as a result of either inadequate watering or too much moisture around the roots.

How to Revive Succulents with Shriveled Leaves due to Under Watering 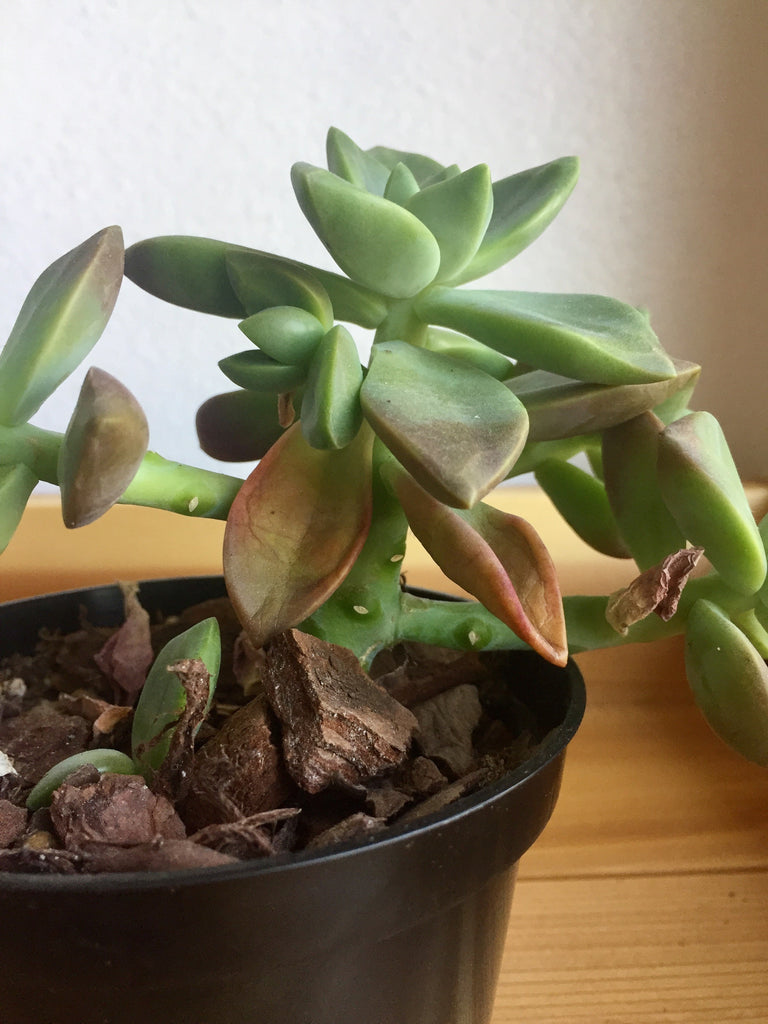 Underwatering is the most likely culprit if it has been more than two weeks since you last watered and your succulent leaves are shriveling up.

The first sign that your succulent needs more water is typically the shriveling of its leaves since succulents store moisture in their fleshy, thick leaves as a defense mechanism against thriving in desert climates all over the world.

The good news is that with more suitable watering frequency, a succulent is likely to recover if its leaves only look to be slightly shriveled.

It is difficult to give general recommendations regarding how often to water succulents because there are so many variables. However, in the majority of cases, watering your succulents once every two weeks is appropriate, though this can vary greatly.

Generally speaking, if you are hydrating your succulent with a decent soak, it should regain its full and plump appearance after two watering cycles.

However, keep in mind things that can accelerate drying or enhance moisture for the succulent and result in shriveled leaves, such as:

The succulent should begin to show symptoms of recovery the next week if your leaves are shriveling and it has been some time since your last watering session.

It can be useful to note on paper or in your phone when you last watered your succulent.

Succulents don’t require a lot of water, yet occasionally people misunderstand this suggestion and give the plant too little water.

If you water your succulents too little, the top inch or two of the soil may be moist, but the water will not reach the roots where it is needed.

The liquid from the soil then evaporates, leaving your succulent’s roots unable to take in any additional moisture, creating a deficit. The first sign of stress is typically shriveled leaves, and after a prolonged period of drought, the color of the leaves may start to look somewhat brown.

Succulents need a really good soak so that water trickles down the bottom of the pot to make sure the water reaches the roots, even if they shouldn’t be watered too frequently.

Before rewatering, the soil should then be allowed to dry for roughly 14 days (depending on your climate).

This watering schedule replicates the moisture cycle found in the succulents’ natural desert habitat, where plants are occasionally drenched by downpours of rain before experiencing drought-like circumstances.

To ensure that you have watered your succulent with the proper amount of water to avoid it from shriveling due to dehydration, always water your succulents until water clearly trickles out the base of the pot (which should have drainage holes).

Shriveling is typically the first sign of stress as a result of watering too lightly, but with proper watering, the succulent should recover nicely.

Hydrophobic Soil Repels Water Away from the Succulents Roots

This is typically because succulents are kept in potting soil that contains peat, which, when it dries up, can become hydrophobic (rejects water).

Some potting mixes can bake to a hard texture, which prevents water from penetrating and reaching the roots of your succulents when soil dries out (as it should between watering your succulents).

Instead, the water is resisted and slides down the soil’s surface, down the edge of your pot, and finally out the pot’s base.

This may give the succulent the appearance of being well-watered when in fact the soil around the roots and below the surface is still dry after watering.

The result of this impact is a prolonged drought that dries up your succulent leaves and causes them to shrink.

Repot your succulent and use better potting soil to fill the pot.

In their natural home, succulents thrive in highly arid soil that drains fast and does not retain water around the roots.

Repot your succulent using a special succulent and cactus potting mix that mimics the drainage qualities of the soil found in the succulents’ natural habitat (available at garden centers and on Amazon).

Even when it is completely dry, a specially designed succulent potting soil maintains a porous, aerated structure.

As a result, the soil does not become hydrophobic and water can freely permeate the soil to reach the roots rather than flowing off the top and causing drought.

Succulent soils mimic the nutritional profile of the soil where succulents grow in the wild by including more inorganic material (such as sand and grit at the proper particle size), which drains at the best rate.

Your succulent’s roots can absorb the moisture they need with the correct soil mixture, and they can also drain well to prevent root rot.

Succulents Shriveling due to Over Watering and Excess Moisture

While shriveling is more often a sign of a succulent that hasn’t received enough water, it can also occur when the soil has been overly wet around the roots for a prolonged period of time.

A clear indication of overwatering is when the leaves of a succulent turn yellow or translucent, have a mushy texture, and droop.

The presence of excessive moisture around the roots can result in shriveling and be brought on by:

Since this mimics the moisture balance in the succulents’ desert habitat, succulents need the soil to dry up between waterings.

Therefore, it’s crucial to water the succulent properly and take into consideration any additional sources of excess moisture near the roots that can put the plant under stress.

How to Revive an Over Watered Succulent with Shriveled Leaves 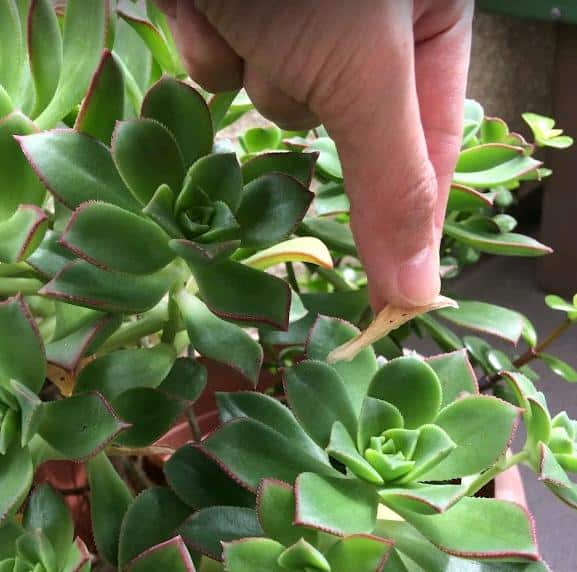 Following each of these guidelines will allow the succulent to have a watering cycle that meets their needs and let the leaves to recover from their shriveled state to a firm, green one.

However, if your succulent’s leaves do not improve after two weeks and begin to change color, you should remove any parts that are becoming black and attempt to replicate the succulent from cuttings and any healthy parts of the plant that are still there.

Succulents naturally reproduce vegetatively through the development of roots in their leaves, making their propagation quite simple. Cutting-based propagation also has a very high percentage of success. To learn how to effortlessly save your succulents, watch this YouTube video:

How do you save a shriveled succulent?

Cut off any brown or black roots as they are already rotting. Dig the succulent out of the ground and remove any excess soil that has become stuck to the roots. Place the plant on a mesh or other strainer until the roots have had two to three days to air dry. Replant the roots in the pot once they have dried completely.

Why do succulents go wrinkly?

Why are my succulent leaves shriveling?

What to look for to determine if your succulent is submerged is listed below: Shriveled leaves: As a plant’s water supply continues to diminish, its leaves will begin to wrinkle and shrivel. The more severe the water shortage, the more wilted and droopy the plant will appear.

How do you fix wrinkled succulent leaves?

You will need to unpot and then repot the succulent in order to correct these yellow and wrinkled leaves (essentially root rot). The succulent must be unpotted before being allowed to dry out on a paper towel for a couple of days until the roots are entirely dry.

2 thoughts on “Why are My Succulent Leaves Shriveling?”