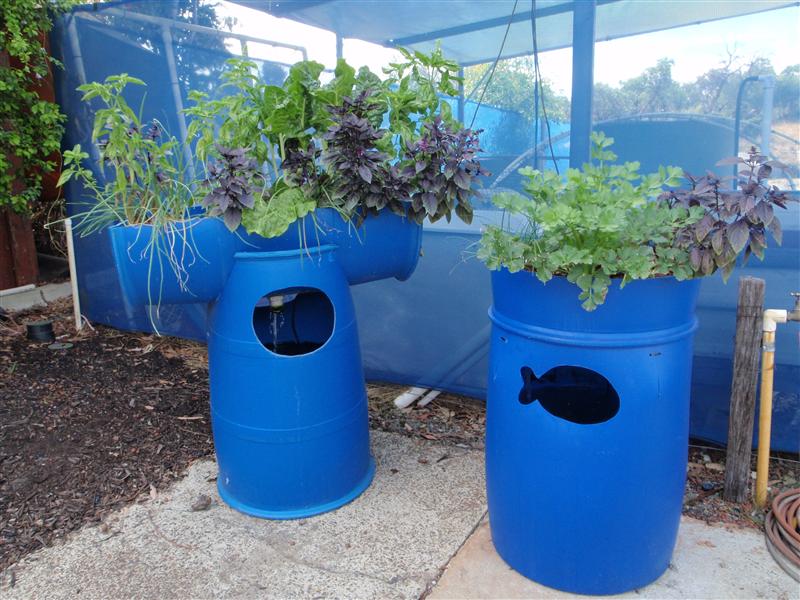 A 55-gallon barrel can be used to construct the entire aquaponics system known as barrel aquaponics. One of the many varieties of aquaponic systems that all operate on the same aquaponic principle is called as barrelponics.

A 55-gallon drum is cut in half so that one half is used as the fish tank and the other half is utilized to grow plants in grow media in a barrel aquaponics system. Water and air pumps are used to aerate and circulate the water.

The symbiotic link between fish and plants is known as aquaponics. Ammonia-containing excrement from the fish is produced. Nitrification, a two-step process, transforms the ammonia into nitrites and then nitrates. Nitrosomonas and Nitrobacter, two nitrifying bacteria, accomplish this.

However, there are some factors to take into account when using these barrels in barrel aquaponics, which we cover in more detail in this post.

What is Barrel Aquaponics?

A 55-gallon barrel is divided in half and utilized for barrelponics, a method of growing plants and fish in close proximity to one another.

The chop and flip technique, similar to an IBC aquaponic build, can be used to convert a 55-gallon blue barrel into an aquaponics system.

If a novice is interested in aquaponics, barrel aquaponics is a simple way for them to get started.

See our comprehensive guide on aquaponics to learn all you need to manage a system successfully.

Beginners may easily manage it because to its compact size and obtain a sense of the aquaponics routines and what is necessary for the system to be successful.

A small backyard, porch, or even an inside space with the required grow lights are suitable locations for this activity.

Since the grow beds produce enough surface area for bacteria to live, this type of system does not require a biofilter.

Additionally, since barrel aquaponics uses smaller fish that would not quickly clog the system, no mechanical filter is needed. 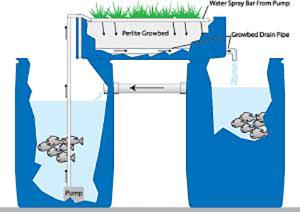 The majority of the 55-gallon blue plastic drums used in barrel aquaponics are blue barrels, and they are safe for aquaponics as long as they are labeled with the numbers 1, 2, 4, or 5.

Blue barrels are made for handling liquids, semi-solids, food syrups in powder form with high mobility. They typically come in a 55-gallon capacity plastic cylinder shape. For aquaponics on a small scale and in the garden, these barrels are frequently employed.

The labeling on the side of the container designates food grade barrels as 1, 2, 4, or 5.

Although barrels labeled 1, 4, and 5 are suitable for food storage, the number two designation offers some additional advantages.

The number two stands for HDPE, or high-density polyethylene, which is the most stable type of plastic and is used to store food for a long time. Additionally, because it is a UV Stabilized Plastic, it can tolerate direct sunshine without degrading.

This indicates that plastic compounds employed in an aquaponic system won’t degrade or break down in any way that would release them into the water system, and they will survive a very long time without doing so.

What Plants Can I Grow in Barrel Aquaponics?

Since the growth space is rather constrained with a single barrel aquaponics system, you can also produce herbs, tomatoes, and vine plants like cucumbers and string beans.

If more than one barrel is being utilized, you can divide one of the barrels in half vertically to increase the surface area and combine both deep water cultures (DWC) and grow beds with grow media in the same barrel.

Build a successful system with this affordable equipment from amazon, that I’ve tried & tested on my setup.

To view search below on Aamzon or your prefered vendor

How to Build a Barrel Aquaponics System?

In an aquaponics system, cycling is the process of establishing a robust colony of nitrifying bacteria before adding plants. Fish is not necessary for it to be done.

when the cycling procedure is finished. The grow beds can be filled with plants.

Now that the system is complete, water is tested once every two days to make sure the water quality is being preserved.

You should keep a pH between 6.8 and 7.0 because it promotes nitrification and plant growth.

Where to find Barrels for Aquaponics?

You may locate a variety of barrels on Craigslist, making finding barrels there simple.

To find plastic blue barrels that meet your demands for barrel aquaponics, check both Amazon and eBay.

For such barrels, I would advise purchasing them from your neighborhood hardware store rather than buying them online, where they might be more expensive. Used barrels are another excellent choice that aids in the recycling of these plastic goods.

The barrels must have legible markings that clearly identify HDPE and be of food-grade quality.

As was already noted, barrels can be utilized as a single unit or in split barrel configurations to provide more surface area for plants and to test out different plant systems.

Here, an aquaponic system is created with a single barrel.

In this case, you would utilize two or more barrels that had been trimmed so they would lie flat.

The plants are located in half barrels that are placed side by side, while the fish are kept in a full horizontal barrel.

Its footprint is a little bit bigger and it can accommodate more fish and plants.

How do you build an IBC aquaponics system?

How much do aquaponics farmers make?

Even the most prosperous aquaponics businesses, according to Timmons of Cornell, only make approximately $50,000 annually.

Aquaponic farms also have the benefit of being able to run year-round. All of this adds up to a system of food production that is much more profitable than ones based on soil.

Is aquaponics a good investment?

With good reason, this is a frequently asked issue on forums. Although aquaponics is a more ecologically friendly technique of growing than traditional agriculture, most producers will not be able to make a profit from it if it is not also financially sustainable.