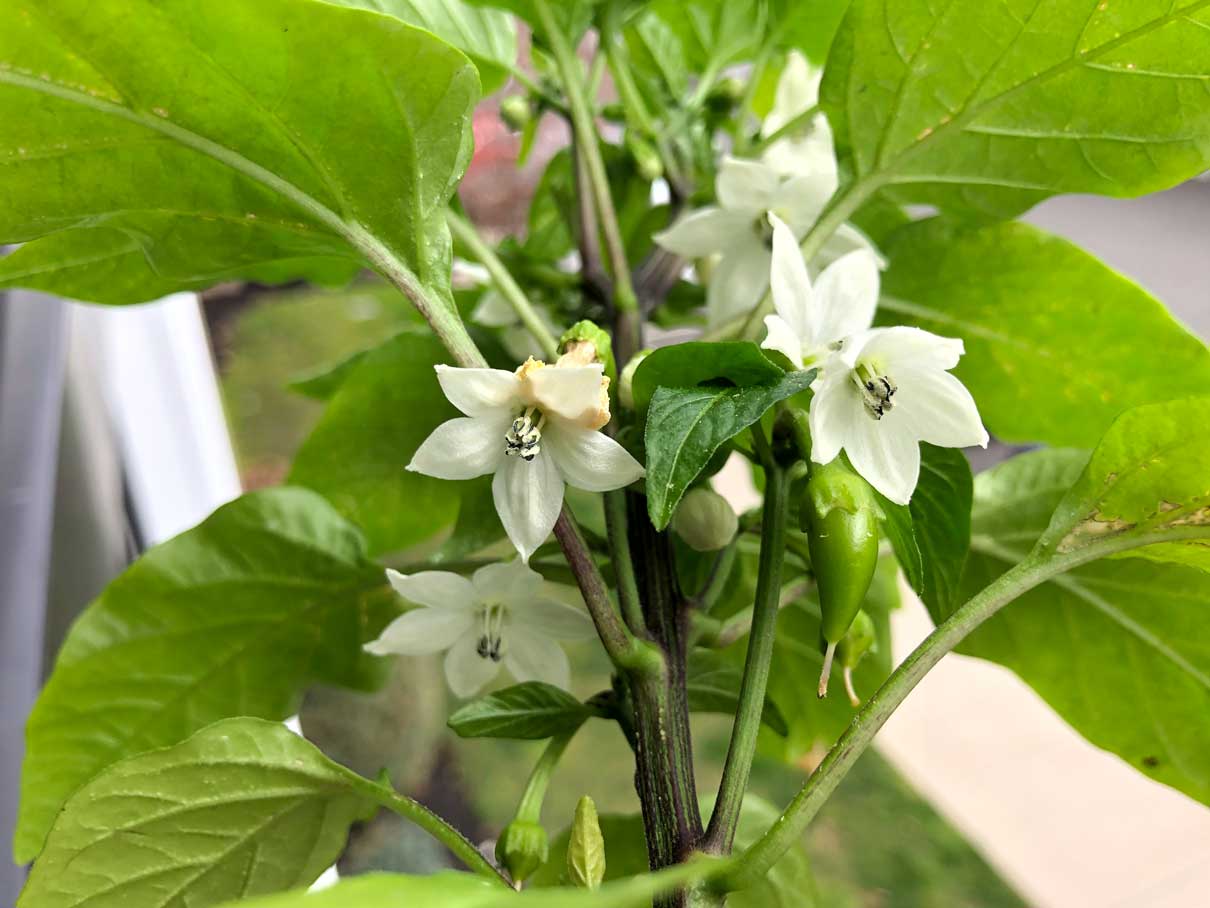 Scientifically speaking, bell peppers are known as Capsicum annum. Both annual and perennial growing methods are available for bell peppers. The fruits of this shrub are raised for consumption.

When there is a low quantity of nitrogen that is readily available in the form of nitrates, bell peppers have a tendency to flower early. As a result, there is less vegetative growth and more blossom formation from phosphate in the soil. Bell pepper flowering is also influenced by temperature and growing environment.

But why does the plant flower too soon? What elements influence bell peppers’ early flowering? To learn more about it, let’s read the article.

Some pepper plants will begin to bloom early. This can be brought on by a number of things, such as the size of the pot, insufficient fertilizer, or uneven temperatures.

I use and advocate Miracle-Gro Shake ‘N Feed as a cost-effective fertilizer to prevent bell pepper blooms from dropping. Clicking here will take you there!

First off, early blossoming in pepper plants is natural; there is no reason to become alarmed. This can be brought on by a number of things, such as temperature, fertilizer, or the size of the pot.

The early flowering in bell peppers can be brought on by a variety of circumstances. For instance, variable temperatures, the size of the pot, and the use of insufficient fertilizer.

The plant will be forced to flower early if the bell peppers are being grown in a small pot.

This is due to the fact that it is a natural reaction of the plant when it does not have enough room to produce more leaves.

It will eventually go to the growth stage after that, which is the period of flower production.

The optimum bell pepper growth will occur if the growing circumstances are in accordance with their needs.

Cold, harsh weather can quickly have a severe impact on their growth. Their best development occurs when the temperature is between 75 and 80 during the day.

However, the delicate bell pepper plants can be severely harmed by both the bitterly cold winter and the scorching summer.

For the healthy development of plants, there is a vast variety of fertilizers available on the market. For all plants to live a healthy existence, the three essential nutrients are nitrogen, phosphate, and potassium.

Your bell pepper plants will naturally promote early flowering if you do not provide them with enough fertilizer containing these vital elements.

As a result of limiting vegetative development while encouraging fruit production from early blooming, low nitrogen fertilizers have also been found to induce earlier flowering than other types of fertilizers.

How To Prevent Bell Peppers From Budding Too Early?

First off, as was already discussed, whether or not your plant blooms early depends on how much fertilizer you are feeding it.

All potted plants require a lot of nitrogen during their early growth period to produce robust stems and dense leaves.

Bell peppers won’t bloom too early if they receive enough nitrogen throughout their initial growth stage.

If pepper plants are given a nitrogen boost, they will concentrate more on developing their stems and leaves rather than flowers. To stop bell peppers from blooming too early, switch to fertilizers with increased nitrogen content.

The plant will produce early flowers if it is grown in a small area since it has no other option.

In order for the plant to produce enough leaves and stronger roots, it is always best to cultivate bell pepper plants in larger pots with adequate room.

However, if you intend to put the bell pepper plants in the ground after transplanting them into pots.

Make sure to pinch off any early flowers that are developed on the plants before moving them outdoors.

NOTE: Although bell peppers are often grown outside, you can grow them indoors and then move them outside later. It is recommended to maintain indoor conditions at par with those outside.

How Long Should it Take For a Bell Pepper to Produce Flowers? 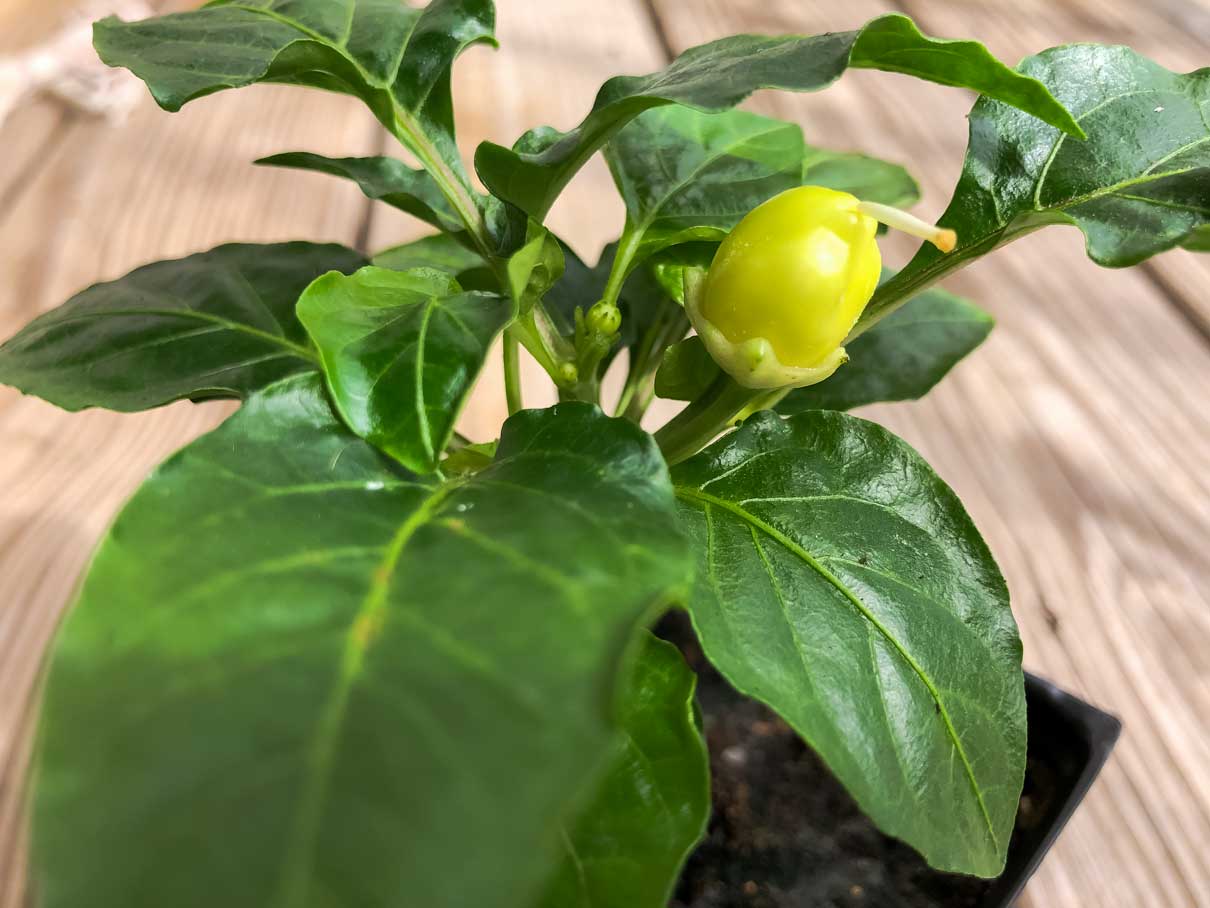 Bell pepper plants are first planted indoors and then moved outdoors because their growing season is rather extensive.

Wait at least three to four weeks after relocating bell pepper plants outdoors for them to acclimate to their new surroundings.

The plant will grow sturdy roots and a sufficient number of leaves during this period, providing food for future fruit production. Reduce the amount of fertilizers once the plant has developed a healthy number of leaves so that it can start to bloom.

A healthy bell pepper plant blooms when it has a sufficient number of leaves and deeper roots.

The bell pepper plant should now go to the stage of growth where flowers are formed once these items have matured.

A healthy bell pepper plant needs a certain amount of time after being moved outside before it starts to bloom.

Should I Pinch Off Early Pepper Flowers?

There are several factors to consider while pinching off early pepper flowers, such as whether or not your bell pepper is currently in the flowering stage.

You’ll have more peppers in your kitchen the more blooms your pepper plant produces. However, if it is blooming early, you should pinch them off to conserve the plant’s vigor.

If you intend to transplant your indoor-grown pepper plants outside in the spring. Due to its natural reaction to a quick environmental shift or as a result of the limited space in pots, the plant will bloom.

Depending on the kind you are cultivating, you may need to pinch off the early pepper blooms. For instance, early blossoms can be clipped back if you have produced quicker kinds (jalapeno, bell peppers).

On the other hand, pinching the early blossoms won’t benefit the plant if someone is growing slower to grow kinds (ghost peppers).

Furthermore, timing has a role in the decision to pick the early blossoms. Always harvest flowers as soon as they are planted outside. The plant’s roots will become stronger as a result of this.

If a month has passed since the transplant, avoid pinching the blossoms off the plant. The plant had fully grown roots and foliage by that point.

By pinching the early blossoms, you can encourage the plant to focus its efforts on growing more foliage and deeper roots.

However, if you chose the incorrect blossoms (i.e., when the plant was not supposed to produce flowers), your plant won’t bear enough fruit.

Pinching off the initial bloom will assist the plant become stronger before it begins to produce fruit if it is growing in less fertile and low-moisture soil.

A stronger plant will result in a higher yield. However, pinching the early blossoms won’t help the plant produce more overall if the growing conditions are good.

Bell peppers may produce early flowers as a result of many circumstances. This may occur as a result of a lack of pot space, issues with the ideal temperature, or fertilizers.

Pinch off any early blooms or buds from your plant if you’ve observed them while it’s still young and frail, as this will conserve the plant’s energy. Remember that your plant won’t generate more, stronger leaves and roots if you don’t remove the early blooms.

The quantity of food created by photosynthesis is directly inversely correlated with the number of leaves. The fruits won’t finally ripen if there aren’t enough leaves.

By adding more fertilizer, one can also stop early flowering and buds in bell pepper plants. Giving your plant extra room to grow additional roots is another way to solve this issue. in order for the roots to receive nutrients from the soil and produce thicker leaves.

Should you let pepper plants flower?

In order to ensure that your peppers ripen, you might want to leave early buds on kinds that take longer to produce, such as ghost peppers or habaneros. Early blossoms can be pruned back till the plants are a more mature size if you’re growing quicker kinds like bell peppers or jalapenos.

Should I pinch off early pepper flowers?

To encourage the plants to invest more energy in growth rather than a few early pods, we always clip our pepper plants’ first flowers. This is especially beneficial to do before transplanting because the plants will concentrate their energy on expanding their roots rather than generating fruit.