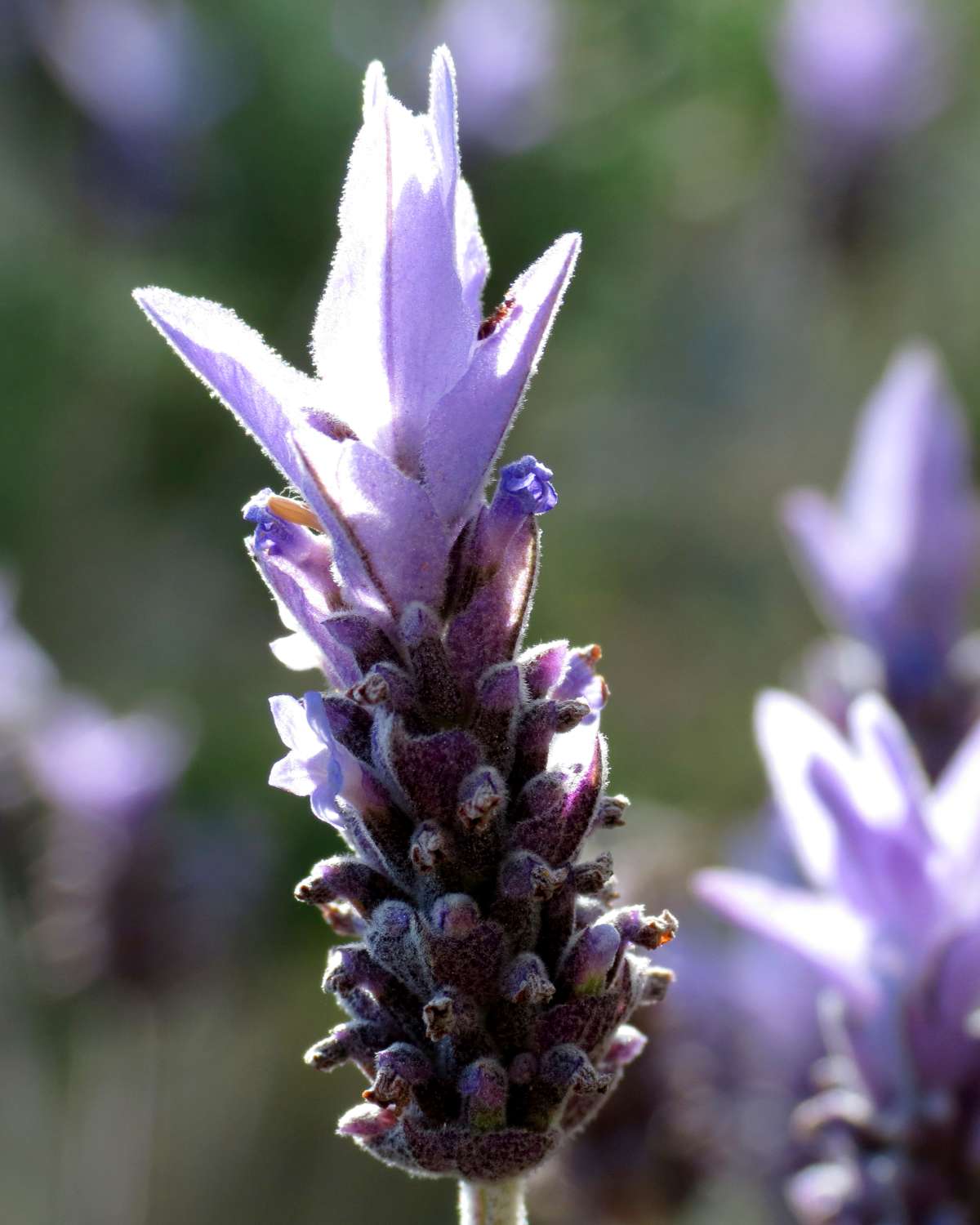 The lengthy blossoming season and exquisite scent of French lavenders are prized by people all over the world.

Fortunately, French lavender is simple to grow, however they do need certain particular conditions and care in order to thrive and produce their best flowers.

Scroll down for more information on: Growing and caring for French lavender, which is covered in detail in the following order in this page.

Where French Lavender will Grow?

Knowing which climates French lavender will flourish in is the most crucial factor in growing it.

The best conditions for French lavender cultivation are warm, moderate winters. Because they are not cold-hardy, French lavenders will perish in frost, snow, ice, and subfreezing temperatures. In USDA zones 7 to 11, most kinds of French lavender are hardy.

Therefore, if your climate has cold winters, you cannot plant French lavender outside; nevertheless, you can grow them outdoors in pots and bring them inside for protection during the winter. (To learn more about the safety measures to take, see my post on whether French lavender will survive the winter.)

French lavender will not do well in locations with consistently excessive humidity, as would all lavender species and variants.

Similar to its native Mediterranean climate, French lavender thrives in hot settings with little to no rainfall during the growing season (spring to early fall).

When do they Flower?

If the faded flowers are frequently deadheaded, which promotes additional blossoms, French lavender has an unusually extended flowering season that can last for several months.

The first flowers appear in the spring, typically in May or June, and if the growing circumstances are ideal, they may continue to bloom well into the fall, as late as September.

Always grow in full sunlight. French lavender is indigenous to the Mediterranean-coasting nations of Southern Europe. In their natural habitat, where temperatures are high and humidity is low, they spend the entire day in the full sun.

They produce the most oil, blooms, and greatest scents in these conditions.

French lavender will grow with 6 hours of sun every day during the growth season, but planting it in the garden’s most sunny location will yield the finest results.

The chance for blossoming increases with sun exposure. In the shadow, lavenders will not thrive and will wither away quickly.

Early spring is the ideal time to cultivate French lavender. This will give the plant a chance to establish its roots in the new soil and grow. Once established, the roots will be better equipped to absorb water before the summer’s severe heat and sunlight threaten to dry out the plant.

There is greater flexibility for the timing of your lavender planting because French lavender is adapted to mild climes and does not need to prepare for a cold winter with frost and snow.

Anytime from early spring to early fall is an excellent period to plant French lavender cultivars. 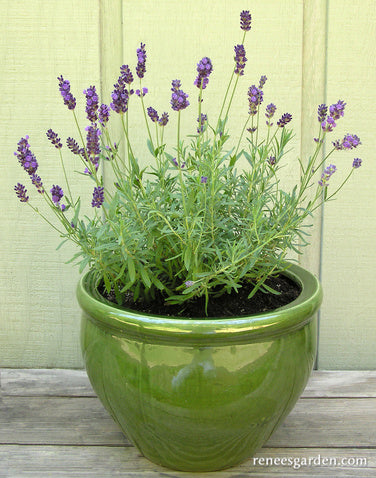 If there has been a lot of rain since you last watered the lavender, wait a few more days before watering and check to see if the soil is dry first. If you find any wetness, wait about a week before watering again.

Simply put, this is a climatic adaption for their native Mediterranean region. French lavender overwatering causes more issues than underwatering ever can.

Frequent watering will keep the soil moist and cause root rot in French lavender cultivars, therefore avoid doing so. Brown foliage and a droopy appearance are indicators of an overwatered lavender plant.

Always give each lavender a good soak and make sure the soil is moist around it; however, the soil should also drain quickly and not retain any moisture.

Water potted French lavenders until there is a trickle of liquid coming out of the drainage holes in the pot’s base. To choose the finest pot for lavender, read my post on picking the best pot for plants.

French lavender has a reputation for thriving in neglect, but it does have a certain set of soil requirements that it needs in order to develop and flower.

It is our responsibility as gardeners to duplicate the native environment’s soil characteristics.

The soil needs for French lavender are as follows:

If you want your soil to resemble these circumstances, you’ll need to add some sand or gravel such that they account for at least 30% of the planting mix’s volume and the remaining soil is organic.

Increased drainage, improved soil structure, and soil fertility will all be benefits of the sand or gravel addition (as sand and gravel are relatively low in nutrients).

The pH of acidic soil can be changed to alkaline by adding lime to the soil, which is a good option if you have acidic soil. Lime is accessible online and at any reputable garden supply store. See my post for more information on growing lavender in acidic soils.

Before purchasing French lavenders, it is a good idea to find out your soil’s pH if you are unsure. The simplest way to achieve this is with a soil gauge, which I personally use from Amazon. It does not require any scientific expertise because it just provides a clear reading of the pH of the soil and is reasonably priced.

Since chalk soils include all the qualities of the ideal soil type, they are perfect for growing French lavender.

French lavender needs to be pruned each year because pruning:

When to prune: There is some disagreement regarding the ideal season for pruning French lavender. French lavenders can be properly pruned in the early spring and in the fall after blossoming.

Never cut a lavender plant down to the woody base since this area does not recover well and you risk killing the plant or drastically reducing the number of strong stems and blooms that can develop.

French lavender is less vulnerable to harm from the cold in warm locations with mild winters (within USDA zones 7-11), therefore you can prune it in the fall there. Wait until after the plant has flowered, then circle the plant to avoid it growing lanky or splitting at the base’s delicate woody structure.

You could also prune it in the early spring. This will encourage the growth of new stems, increasing the possibility of more flowers. Whether you prune your lavender at the beginning or the conclusion of the growing season, the same guidelines apply.

Check out the following YouTube video for a helpful visual guide about what to do: 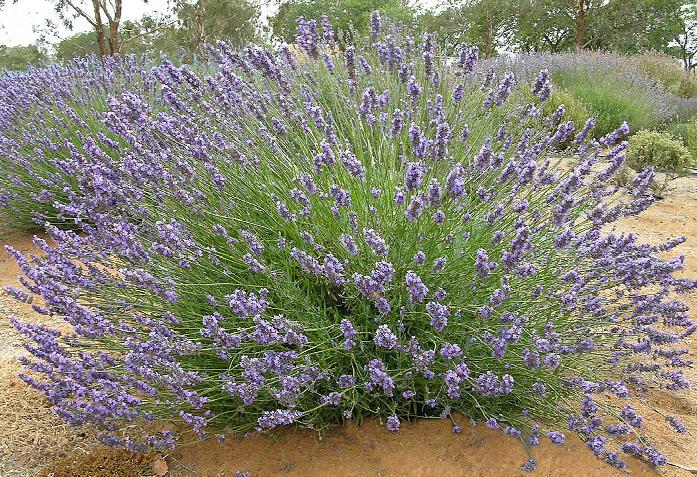 Lavender appreciates air flow through the foliage, thus they benefit from being separated from one another. This lessens the possibility of a fungal disease by helping to dry up any moisture that can pose an issue.

Additionally, the roots require room to spread out and acquire water and nutrients without being overrun by rival plants’ roots.

How Long do they Live?

Compared to English lavenders, which, under ideal conditions, can survive up to 15 years, this is a substantially shorter period.

The most affordable approach to maintain a supply of lavenders is to grow your own, which is a really rewarding garden endeavor.

Compared to trying to grow lavender from seeds, which requires a very specific sequence of changing conditions and has a lower success rate, reproducing lavender from cuttings is considerably simpler and more effective.

If you’re curious, check out this YouTube video that demonstrates how simple it is to grow fresh lavender plants from cuttings.

What Size are French lavenders?

Depending on the cultivar and whether it has received the best care and conditions, French lavenders can range in size.

Sunlight is typically the most significant aspect, and the more sun the better. Other important factors include well-draining soil, occasional watering, and alkaline soils. Popular and commonly accessible varieties from garden supply stores or online are:

Lavenders thrive in soils with low to moderate fertility, comparable to the sandy soils of their native Southern European habitat. French lavenders don’t require feeding or fertilizer. With the application of nitrogen-based fertilizers, the plant will become lanky, develop yellow foliage, and bear fewer blooms.

If anything, you might need to add sand or gravel to the soil to balance the nutrients. Read my article on the ideal soil mixture for lavenders for additional details on this.

Avoid covering the lavender with a mulch made of organic materials (like compost or manure), as this can increase the soil’s fertility and cause it to hold more water, both of which will harm the lavender.

Instead, some industrial producers employ a mulch of white stone to reflect more sunlight onto the plant—more sunshine is better—reporting that this increases flowering and oil production.

Will French lavender Grow in pots?

French lavender cultivars thrive in pots (as do all lavenders), where the drainage conditions are ideal for lavenders, which like dry soils.

Since French lavender is not cold tolerant, planting lavenders in pots allows you to take the plant indoors during colder months. If you live in a frigid climate, French lavenders can survive the winter this way.

Since they are small and may fit on a sunny window sill and thrive at room temperature, dwarf kinds of French lavender are also thought to be the best plants for indoor potted lavenders.

If you keep them out of the damper rooms, such bathrooms and kitchens, they will bloom within and release their particular scent.

You can find a detailed guide in my article on how to cultivate lavender indoors.

It is crucial to stress that French lavender is not cold resistant and will not endure freezing temperatures, frost, snow, or ice outside (most varieties are hardy to USDA zones 7-11).

It will survive outdoors without issue if your environment has mild winters like those seen in the Mediterranean region of southern Europe, where French lavenders are native. However, there are some helpful tips for caring for French lavenders over the winter, including:

If you live in a region where the winters are chilly, you can grow lavender in a container outside throughout the growth season and bring it inside before the first frost.

Even though indoor lavender is dormant during the winter, it still benefits from sunlight, so always place it by the sunniest window in the house.

Read my article for further information on how to care for potted lavender in the winter.

Does French lavender come back every year?

Being able to transfer the plant indoors in cold weather is a benefit of growing lavenders in pots since French lavender is not cold tolerant. In a frigid area, French lavenders can last the winter in this way.

Due to their diminutive size and ability to thrive in a roomy environment at room temperature, dwarf cultivars of French lavender are also thought to be the best plants for indoor potted lavenders.

What is French lavender good for?

They will bloom indoors and release their particular scent if you keep them out of the damper rooms like bathrooms and kitchens.

How do you care for potted French lavender?

Read this article for a comprehensive instruction on how to cultivate lavender indoors.

Is French Lavender a perennial?

The fact that French lavender is not cold-hardy and will not endure freezing temperatures, frost, snow, or ice outdoors must be made clear (most varieties are hardy to USDA zones 7-11).