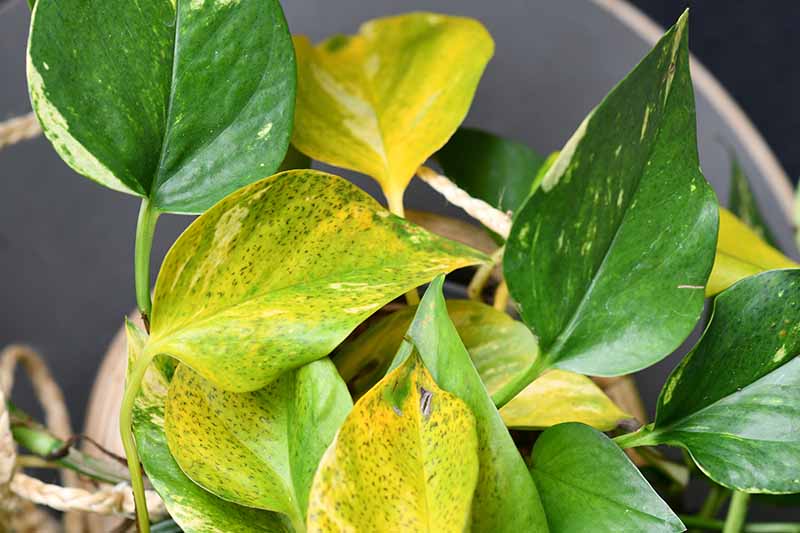 The excessive water around the roots caused by overwatering, poorly draining soils, or containers without drainage holes causes ivy leaves to turn yellow. Yellow ivy leaves may also be a sign of insufficient nitrogen levels in the soil or that the ivy roots are confined to a pot and unable to get the nutrients they need.

See why your ivy plants’ leaves are going yellow and learn how to save the ivy by reading on.

Ivy plants are found naturally in woodlands and forests, where they thrive in damp soil that drains quickly.

As ivy plants cannot tolerate damp, slow-draining, or soggy soil around the roots for extended periods of time, excess moisture around the root ball is by far the most frequent cause of ivy plants becoming yellow.

The root of the ivy may have too much water due to:

Long-term saturation of the Ivy’s soil results in the fungal disease root rot, which can cause the plant to wither and die. Replicating the well-draining soil conditions of the plant’s natural woodland habitat is crucial to saving the ivy plant.

Save Ivy with Yellow Leaves Because of Saturated Soil 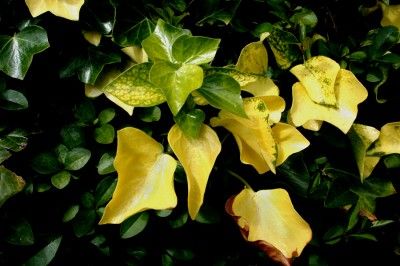 Your ivy should start to recover once the ideal ratio of watering and drainage has been established. How long it was exposed to excessively moist soil conditions will determine how long it takes to recover.

New, robust growth ought to start to show up in the spring and summer. However, prolonged periods of soggy soil can lead to root rot, at which point it will be very challenging to save the ivy plant.

(To find out how to determine the ideal watering frequency for ivy plants in your home or yard, read my post on how to water ivy plants.)

Lack of Nutrients Cause Ivy Leaves to Turn Yellow

Ivy is a vine that produces a lot of leaves, thus it needs soil that is quite rich in nutrients to support the growth of its healthy, green (or variegated) leaves.

The roots of the ivy may have used up all the nutrients in the potting soil if it has been in the same pot for a long time, which causes the leaves to turn yellow.

As a result of the soil’s deficiency in nitrogen, iron, or magnesium, your ivy may develop yellow leaves.

It can be challenging to pinpoint which particular nutritional shortage is to blame for your ivy leaves becoming yellow, but no matter what the cause, the remedy is the same.

Save Ivy Plants with Yellow Leaves Due to Lack of Nutrients

Ivy plants with yellow leaves should be moved to a bigger pot or container with new soil if you want to save them. Because a larger pot has more soil capacity, the roots have easier access to the nutrients they need.

When the ivy has had an opportunity to establish itself in the potting soil, this should assist to solve the issue and the ivy should begin producing new, green leaves. Even while the yellow leaves might not always turn green, once your ivy begins to sprout new green growth, you can prune back the yellow-leaved vines to encourage new growth and aid in the plant’s recovery.

During the spring and summer when the ivy is actively growing, it is best practice to treat potted ivy plants once a month with a standard house plant fertilizer.

In order to prevent the ivy plant’s leaves from turning yellow, a well-balanced liquid fertilizer makes sure that it has access to all the nutrients it needs to develop healthily and green.

It is always preferable to use a well-balanced fertilizer rather than trying to remedy individual nutritional deficits because an excess of one nutrient can make it more challenging for the ivy’s roots to absorb another nutrient.

(If your ivy plant appears to be sick, read my post on how to resuscitate a dead ivy plant). 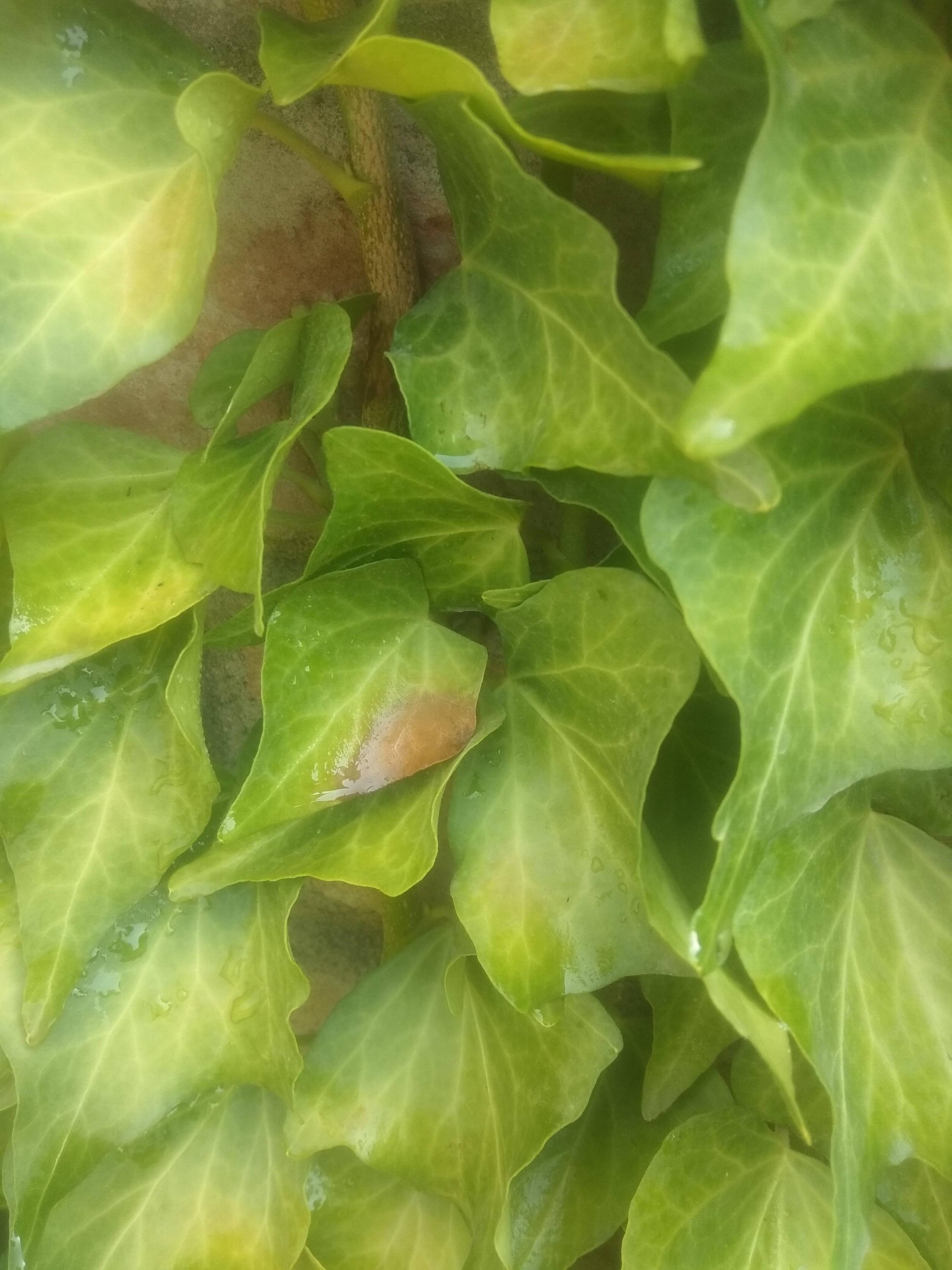 Ivy plants kept indoors are more likely to have spider mite infestations because the humidity levels are generally significantly lower than those found outside, which is ideal for spider mite growth.

Fortunately, controlling and preventing spider mites is fairly simple. Since ivy needs some humidity and spider mites prefer low humidity, misting the leaves with water once or twice a week will create a humid microclimate that will keep the spider mites away and improve circumstances for the ivy.

The best solution to deal with the spider mite issue right away is to use an insecticidal soap made from neem oil since, while it kills spider mites, it doesn’t damage other wildlife or pets.

If there is a substantial infestation, it may require two or three applications of neem oil. Neem oil can be applied using a towel to the ivy leaves to stop any additional yellowing of the leaves.

The ivy should recover well once the spider mites have been eliminated if you clip back any severely damaged yellowish leaves.

Can yellow leaves be fixed?

– Step 2: Look for Unwelcome Critters. … Since the ivy’s roots may have used up all the nutrients in the potting soil if it has been in the same pot for a long time, the leaves may have turned yellow.

How do you heal yellow leaves?

Additionally, smaller pots hold less soil and, consequently, fewer nutrients, which may also be the reason why your ivy leaves are turning yellow and appearing ill.

Should yellowing leaves be removed?

Because the soil is deficient in nitrogen, iron, or magnesium, your ivy may have yellow leaves as a result.

Although it can be challenging to pinpoint which particular nutritional deficiency is to blame for your ivy leaves becoming yellow, the remedy is the same no matter the cause.

How often should you water ivy?

You need to move the ivy to a bigger pot or container with new soil if you want to save the ivy plants with yellow leaves. Greater access to the nutrients the roots need is made possible by a larger pot’s increased soil capacity.