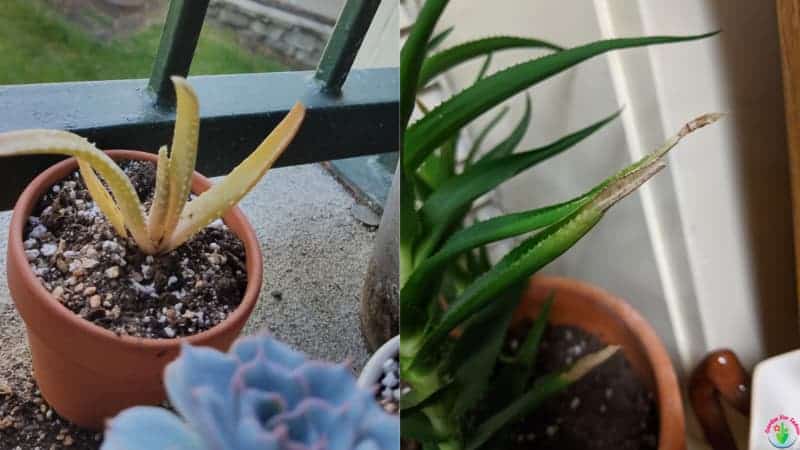 Aloe plants are succulents, and because they store moisture in their leaves, they become smaller when the plant is submerged.

Aloe plants, on the other hand, have evolved to withstand drought and do considerably better with underwatering than with overwatering.

Continue reading to find out how to salvage an underwatered aloe plant and the difference between the two.

How to Tell If the Aloe Plant is Overwatered

Overwatering of an aloe plant causes the leaves to become yellow or brown, become soft and mushy, and appear to be drooping. The roots decay and die back, appearing brown and emitting a foul odor.

Other factors, such sunburn, can also cause aloe plants to become brown. Why is my aloe going brown? (Read my article).

The most frequent error in aloe plant care is overwatering and planting aloes in soils with poor drainage.

Aloe plants flourish when they receive vigorous watering followed by a dry period of approximately two weeks, as this mimics the cycle of watering that they generally encounter in their native environment—a deluge of rain followed by a time of drought.

Aloe plants are able to survive in dry climates with well-draining soils because they absorb moisture from the potting soil after a thorough soak and store it in their leaves.

Aloe plants need the soil to be fully dry between watering sessions, thus you should normally water your aloe plant every two weeks (Read my article, how to water aloe vera for how often to water aloe vera at different times of the year).

Overwatering occurs when you water an aloe plant more frequently than once per week since it prevents the soil from having enough time to dry up.

To minimize the effects of overwatering, it is crucial to understand that the proper watering schedule must work in tandem with the right, well-draining potting soil.

Aloe plants do not thrive in regular potting soil because it retains moisture around the roots for an excessively long time after watering, leading to overwatering symptoms.

If you catch the issue early, before root rot can develop, an aloe plant with mushy, drooping leaves is a warning sign of overwatering but may not necessarily signal that the plant has acquired root rot.

How to Fix an Overwatered Aloe Plant 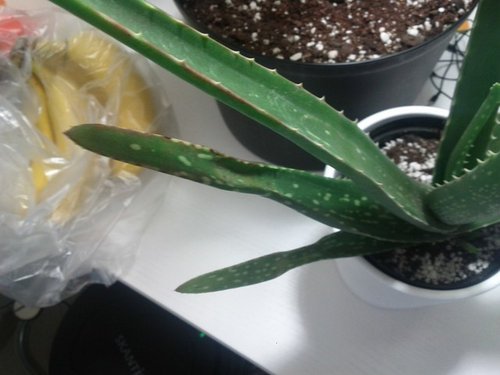 Aloe plants can recover from excessive watering, but if the root rot is too severe, the only solution is to grow more aloe from any healthy leaves that are still there.

The only option to save the overwatered plant may be to reproduce aloe plants, which are rather simple to do. Check out this instructive YouTube video to learn how to grow aloe plants from leaves.

How to Tell Whether an Aloe Plant is Underwatered

When an aloe plant is submerged in water, the plant’s size is reduced, and the leaves flatten down and curl inward as the aloe draws on its internal moisture stores. If the leaves are heavily submerged, they will also turn brown.

Although aloe plants don’t require as much watering as the majority of houseplants, they should constantly be given a good soak.

The recommendation that “succulents and aloe plants do not need much water” is sometimes misunderstood to mean that they should only receive minimal irrigation.

If you water the soil too lightly, the water will only reach the aloe’s roots on the surface and not penetrate the potting soil to where it is needed.

Before letting the earth dry out, aloes need the soil to be evenly hydrated so that the roots may access the moisture they need. After that, the moisture is held in the leaves, which is why an aloe plant in good condition has leaves that feel and appear full.

The leaves of an aloe plant that has been submerged get thinner as it draws on its reservoir of moisture.

Fortunately, the aloe uses this capacity for water storage as part of its survival strategy to deal with the hot and dry conditions of its natural habitat. As a result, aloe typically adapts well to being submerged and recovers pretty rapidly.

It is crucial to keep in mind that if the pot is very small, the aloe’s soil may dry out much more quickly, which may result in underwatering symptoms. The soil can dry out too quickly for the aloe’s roots to absorb adequate moisture, which can result in an underwatered aloe, as can extreme temperatures, intense sunlight, and indoor heat.

How to Save an Underwatered Aloe Plant

To save an underwatered aloe plant, you must first determine how rapidly the soil dries up. The aloe plant’s maturity, the size of the pot, and the temperature of its surroundings can all affect how quickly the soil dries.

Give your aloe a good bath, then feel the soil at the bottom of the container to determine how many days it takes for it to feel dry. This will help you determine the best watering schedule for your aloe plant (and prevent it from being underwatered). The best time to water is when the soil feels dry at the bottom (check for moisture by feeling the soil through the drainage holes in the base).

How do I know if my aloe is Underwatered?

How can I tell if my aloe plant needs water?

Put your finger into the ground just past the second knuckle. The plant needs water if it is dry. Wait a few days if it’s still damp. Check the irrigation holes as well to see if the soil is overly wet and mushy.

How do I know if my aloe plant is overwatered?

If your aloe plant develops what are known as water-soaked areas on the leaves, which appear soggy and soft, you know it is being overwatered. The leaf nearly seems to become completely soaked with water before turning to mush.