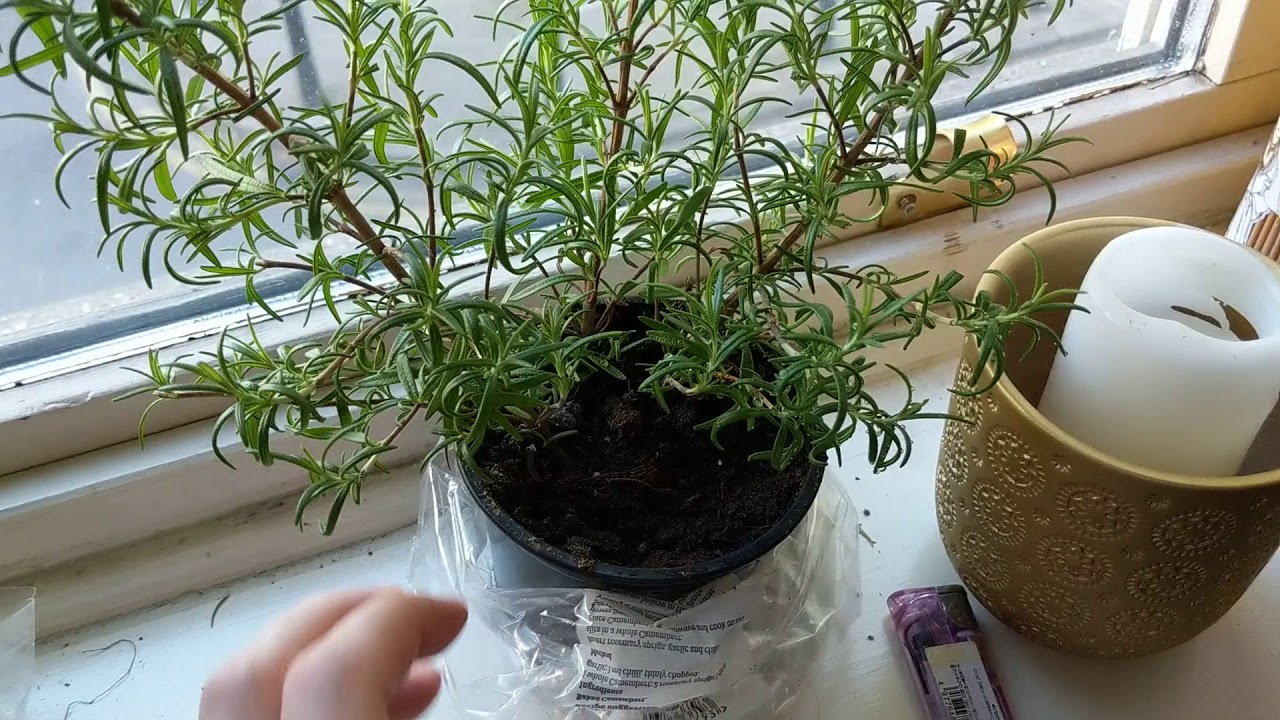 Rosemary is a drought-tolerant plant that needs a little bit of soil to dry out between waterings in order to prevent root rot. When giving rosemary a good bath, water it again after the soil has dried so that water runs out the bottom of the container.

Usually, rosemary in pots needs to be watered once every week in the summer and once every two weeks in the spring and fall.

In the winter, avoid watering rosemary because it is dormant and more irrigation will raise the danger of root rot. A well-draining soil is equally crucial for preventing root rot.

It depends on your environment and the state of your garden as to how frequently you should water rosemary.

Continue reading to learn how to choose the best well-draining soil mix and how often to water your rosemary plant in your garden.

How Often to Water Rosemary

The herb rosemary has adapted to growing in the Mediterranean region of Europe, where it does well in full sun, sandy soils with good drainage, and sparse rainfall.

With only sporadic rainfall and full Mediterranean sun, rosemary has evolved to survive by developing thin, needle-like leaves that minimize the surface area for water loss (transpiration).

Because rosemary does so well in arid climates, it is highly vulnerable to problems brought on by overwatering, which can result in root rot and render the rosemary dark or black.

(For a solution if your rosemary is becoming black, check my article.)

It’s crucial to mimic the watering conditions of their natural Mediterranean environment if you want to cultivate rosemary successfully at home.

Only water rosemary when the earth feels dry since it needs the soil to dry out around the roots in between watering sessions. If the rosemary is planted in a container with suitable soil for drainage, this implies watering it around once every other week during the summer if there isn’t much rain.

For most climates and situations, watering potted rosemary once every two weeks in spring or fall is ideal.

The rate at which the soil dries out might vary depending on a number of factors, which affects how frequently to water your rosemary, including:

Always err on the side of too dry rather than too damp because overwatering is a far greater risk to your rosemary than underwatering.

Check the soil beneath your rosemary plant if it is in a pot by feeling through the drainage holes.

If the soil is damp, wait a few days before watering; however, if the soil feels mostly dry, now is the ideal time to water.

You can determine how frequently to water rosemary based on your conditions once you know how quickly the soil dries out at the pot’s base.

With the exception of periods of severe drought, rosemary often does not need watering until it is completely established in raised beds or garden borders.

In the majority of climates, winter watering is not necessary for rosemary plants in outdoor pots.

Due to the cold, wet soils that dry out much more slowly in the winter because of the lower temperatures, rosemary is dormant and more susceptible to root rot.

During the winter, rosemary gets all the moisture it needs from the surroundings.

The need for well-draining soil that has been heavily altered with sand or grit is much greater in locations with higher rainfall, especially in the winter.

The best strategy to reduce the risk of root rot is to use more sand in the soil to enhance drainage and prevent the soil from holding on to too much moisture.

Once the weather has warmed up and the rosemary is actively developing, you may start watering it again in the spring, once every two weeks.

(For a solution if your rosemary appears to be dying, check my post on how to resuscitate a dying rosemary plant.)

How Much to Water Rosemary 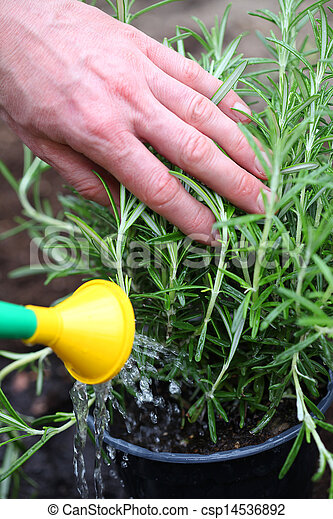 While factors such as climate unpredictability, pot size, soil drainage, and temperature can all affect how frequently to water rosemary, the recommended amount of water should be constant.

Give your rosemary a good soak, enough so that water drips out the bottom of the pot. Make sure the soil has a good soak around the base of the plant if your rosemary is planted in raised beds or garden borders.

In order for the roots to absorb the necessary moisture, the water must effectively penetrate the soil.

A rosemary plant that has been watered insufficiently may experience drought stress since the water only reaches the top inch or so of the soil and does not penetrate to the roots.

The perfect growing circumstances in the original habitat of rosemary can be replicated by giving plants a good soak, followed by a period of drought.

(Read my post on maintaining rosemary plants in pots.)

When it comes to keeping the plant healthy and preventing root rot, the right soil for growing rosemary may be more crucial than the watering schedule.

As a result of the leaves turning brown or even black as a symptom of stress, rosemary does not accept its roots being seated in damp soil that holds a lot of moisture.

(If your rosemary is browning, check out my article for a solution.)

If not modified with horticultural sand or grit to mimic the sandy soil conditions of rosemary’s native Mediterranean area, ordinary potting soil is likely to hold too much moisture for rosemary.

For the best drainage for rosemary, combine around 1/3 sand or grit (by volume) with 2/3 potting soil or multipurpose compost. To prevent root rot, sand and grit create a porous structure that allows water to drain efficiently.

This holds true regardless of whether you are growing rosemary in a raised bed, a garden border, or a pot.

To ensure that water drains away from the roots as quickly as necessary for the rosemary to stay healthy, it may be necessary to use 50% sand or grit and 50% compost in colder locations with heavier rainfall.

In contrast to the conditions to which rosemary is evolved, nutrient-rich soil that contains a lot of nitrogen encourages lanky growth that has a weaker perfume and inferior quality of the leaves.

(Check out my piece on the best potting soil for rosemary.) 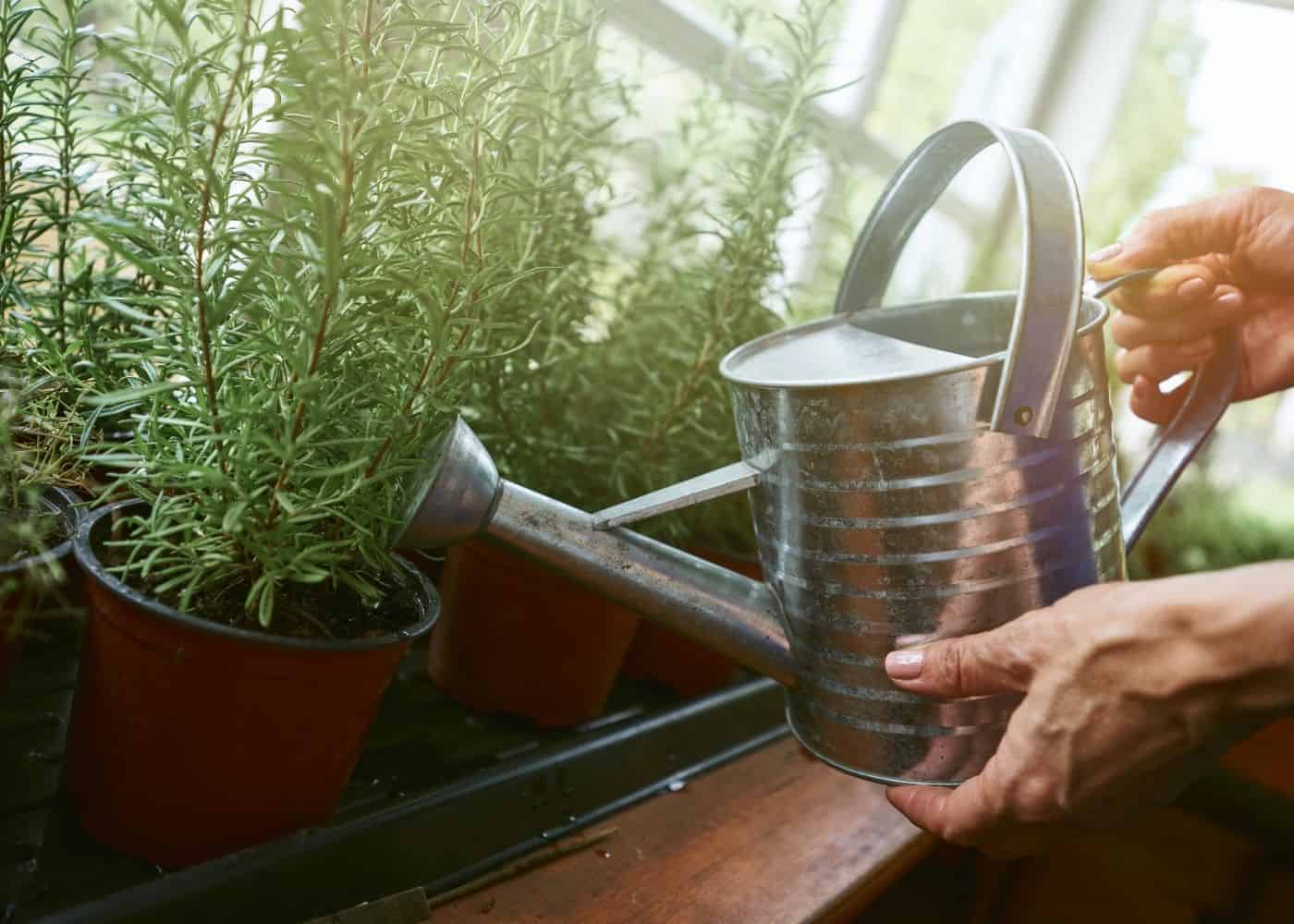 Another effective approach to make sure rosemary has received enough water to reach the roots is to water it until water drips from the pot’s base.

Without drainage holes, water accumulates around the roots of rosemary plants when they are put in pots, leading to root rot and the plant’s eventual death.

Because: Water may still collect around the roots of potted rosemary.

(Read my post on selecting the ideal pots for rosemary.)

Do rosemary plants need a lot of water?

– Typically this means watering potted rosemary once a week in Summer and once every 2 weeks in Spring and Fall.

How do you know when rosemary needs water?

Typically potted rosemary should be watered once a week in Summer and once every 2 weeks in the Spring and Fall. Do not water rosemary in Winter as it is in a state of dormancy and additional watering increases the risk of root rot. Well draining soil is just as important for avoiding root rot.

How much water does a potted rosemary need?

Rosemary plants thrive on selective neglect. When overwatered, the roots of the plant can become infected with root rot and may cause the plant to eventually perish. Rosemary plants prefer to be watered only when the first few inches of the soil become dry.

Can you over water rosemary?

Because the leaves of rosemary begin to become brown or even black as a sign of stress when their roots are sitting in damp soil that holds a lot of moisture, rosemary cannot withstand this condition.

How much water and sunlight does rosemary need?

(Read this post to learn how to fix the problem if your rosemary is turning brown.)