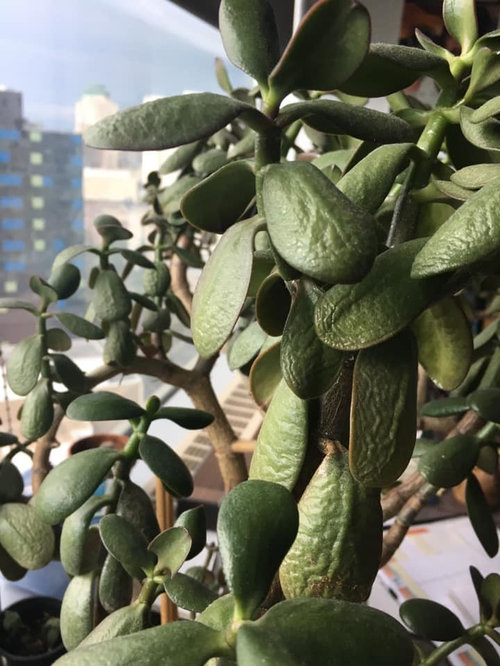 Strong air currents, too much sun, and extreme temperatures can also deplete the leaves’ water stores, causing the jade plants to shrivel.

Jade plants under drought stress have curled leaves because peat-containing soil can reject water when it has dried out.

(Read my post on how to resuscitate a dying jade plant if your jade leaves are turning mushy or squishy and turning yellow or brown instead of wrinkled; this is frequently caused by overwatering rather than underwatering.)

Read on to learn the cause of your jade leaves’ wrinkling and shriveling as well as the solution.

The most frequent causes of the wrinkled or shriveled appearance of jade plant leaves are drought stress, which can be brought on by underwatering, overwatering, or potting soil that has baked hard and repels water from the roots.

Jade Plant Leaves Wrinkled due to Under Watering

Jade plants store water in their leaves, stems, and roots as a drought-resistance measure, allowing them to use the moisture reserves to survive.

Drought stress causes the jade plant’s moisture reserves to be drained, which causes the leaves to become thinner, wrinkled, and shriveled.

The most likely reason for the withered leaves on your jade plant is either insufficient or too light watering.

The jade plant’s wilted leaves may even fall off if it is not watered.

In order to maintain the ideal balance of moisture so that the leaves look healthy and plump without running the risk of overwatering, jade plants normally need to be watered once every two weeks during active growth throughout the Spring and Summer and once every three to four weeks in the Winter.

When plants are watered too sparingly, the top inch or two of soil is only slightly moistened, and water does not fully penetrate and reach the roots, wrinkling the jade leaves as it uses up its water reserves.

How to Revive Wrinkled Jade Plants Due to Under Watering

After giving the soil a good bath in a basin and watering the jade plant once every two weeks or so, the wrinkled appearance of its leaves will be reversed, and after two or three cycles of watering, the plants should appear healthier.

Establishing the proper watering schedule for your environment and the conditions in your home is the key to caring for jade plants to prevent problems like overwatering and the leaves wrinkling from drought.

Give the soil a good soak and watch how long it takes for the dirt to dry up at the bottom of the pot to determine how frequently to water jade plants based on the particular environment of your home.

Feel the soil via the drainage hole on the pot’s base to do this.

Delay watering for a few days until the soil is fairly dry if the soil is still damp. The ideal time to water your jade plant with a good soak is when the soil has dried out. 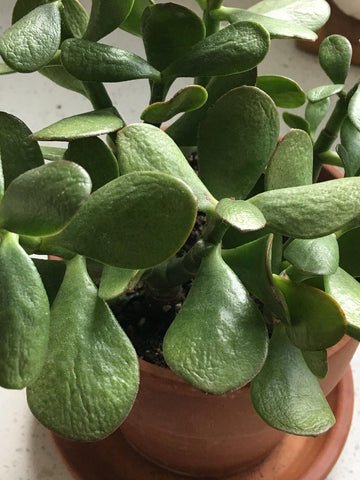 However, if your jade plant is put in a potting mix that contains peat and has completely dried out, peat is hydrophobic (repels water rather than absorbing moisture), which can be problematic for growing your jade plant at home.

Without actually getting to the roots, water may run down the surface of the dry peat potting soil, down the side of your pot, and out the drainage.

If water is trickling out of the drainage holes in the bottom of the pot, it may look that the jade plant is being watered adequately, but if it has run off the surface, the roots will not be able to absorb the water, which may cause the leaves to shrivel or wrinkle.

To restore your jade plant’s withered leaves caused by soil that is water-resistant:

The roots of the jade plant can access moisture using appropriate succulent and cactus soil after watering to replenish their moisture reserves and undo their wrinkled or shriveled appearance.

Of course, this goes hand in hand with appropriate watering habits like giving plants a good bath rather than watering them too sparingly.

Although Jade plants can handle some direct sunlight (which turns the leaf tips scarlet), too much sunlight, especially in the afternoon, can stress the plants and cause their leaves to wrinkle.

Up to six hours of morning light followed by shade in the afternoon, when temperatures are normally at their peak, is the ideal amount of sun for jade plants.

Full sun all day can contribute to accelerating soil drying and increasing water loss from leaves, making it difficult for roots to absorb moisture before the pot has dried (this is particularly the case with small pots that conduct a heat well).

Jade plants that are relocated quickly from a shaded area to a full sun region without having time to adjust to the change in light intensity can likewise scorch from too much sun.

If your Jade plant’s leaves are beginning to shrink, move it into a bright, indirect area so it won’t have to deal with the sun’s harsh rays and high temperatures as it heals.

Give the jade plant a good soak, making sure that the entire potting soil is damp, so that the roots can absorb the water they require to replenish the moisture reserves in their leaves.

I must stress that it is still crucial to allow the potting soil to dry out between waterings in order to lower the risk of root rot, which is a common issue for this drought-resistant plant when grown in our homes.

The jade plant’s leaves should look less shoveled and more healthy after two or three cycles of watering.

Air Conditioning and Wind Can Cause Jade Leaves to Shrivel 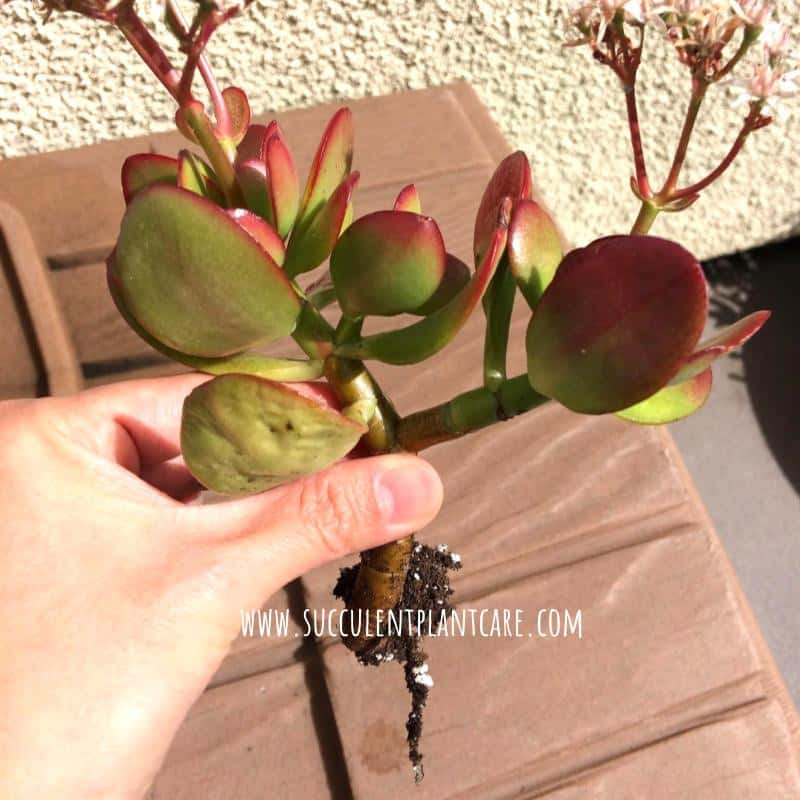 Jade plants do prefer some air movement over excessive humidity, but if they are exposed to air conditioning’s direct current, the steady stream of dry air can quickly dry up the soil and zap moisture from the leaves.

The jade leaves as a result become drier and wrinkled due to moisture loss from their leaves.

Simply place your jade plant in a room away from air currents that will dry the leaves to solve the problem.

After two or three watering cycles, jade plants can start storing moisture once more in their leaves, allowing their leaves to recover from curled or shriveled state.

What causes plant leaves to wrinkle?

But they require soft, indirect lighting in particular. Therefore, if your plant is exposed to direct sunlight, this could be resulting in sunburned foliage and wrinkling, papery leaves. Make sure your plant is not directly exposed to a window’s bright light, and shift it if required.

How often should jade plants be watered?

every two to three weeks

What does an over watered jade plant look like?

Symptoms of Jade Plant Overwatering: Yellowing leaves, leaf drop, soft leaves, and dry leaves are signs that a jade plant has been overwatered. Typically, the roots will exhibit signs of root rot and the soil will be saturated.