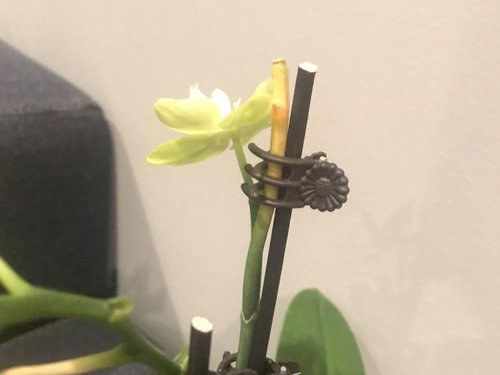 Because orchid stems (or flower spikes) naturally turn yellow and brown and die back after blooming, this is the cause of the stems’ yellowing and degeneration. A yellowing stem is a normal aspect of an orchid’s life cycle, thus it does not necessarily mean the orchid is sick.

Note that throughout the essay, I will refer to what is technically known as the flower spike but is more often referred to as a “orchid stem” as the stem.

For advice on how to preserve your orchid with yellow stems, keep reading.

Once the orchid has completed flowering, the stems start to turn yellow and dry out. After the blooms have fallen off, orchid stems invariably turn yellow and start to die back. This is a normal part of the plant’s cycle and does not indicate that the orchid is dying.

Although there are exceptions, orchid stems normally only support one set of blooms each year before going from green to yellow and drying out.

The orchid typically turns yellow from the top once the flowers have fallen off and dries out.

You don’t absolutely need to do anything to keep the orchid healthy as long as the leaves are green and the roots are healthy (green and plump after watering, with a slightly gray appearance, indicating healthy roots).

According to some orchid experts, you should let the stem to get yellow and dry out so that the orchid may reabsorb the nutrients it borrowed from the stem. Since this can take some time, your orchid could not produce blossoms for a while.

However, others believe it is best practice to use a sharp pair of pruners to clip the fading orchid stem back to the base after it has started to turn yellow because this encourages the growth of a new stem (or flower spike).

If you take proper care of the orchid by placing it in bright indirect light and using a specific orchid fertilizer, you won’t have to wait as long for fresh blooms because pruning helps encourage the growth of a new healthy stem that can exhibit more flowers.

If a portion of the stem is still green, you can also clip the wilting flower stem just above a node that hasn’t produced blooms. If the circumstances are right, a new stem can actually emerge from the node, which then naturally produces blooms in the weeks that follow.

The initial bloom that is created from a new flowers spike tends to be larger than any flowers that develop from a node, which is why I advise pruning the stem down to the base as this promotes the establishment of a much stronger stem with a better display of flowers.

(Read my article Why is my orchid not blooming for further advice and remedies for orchids that flower.) 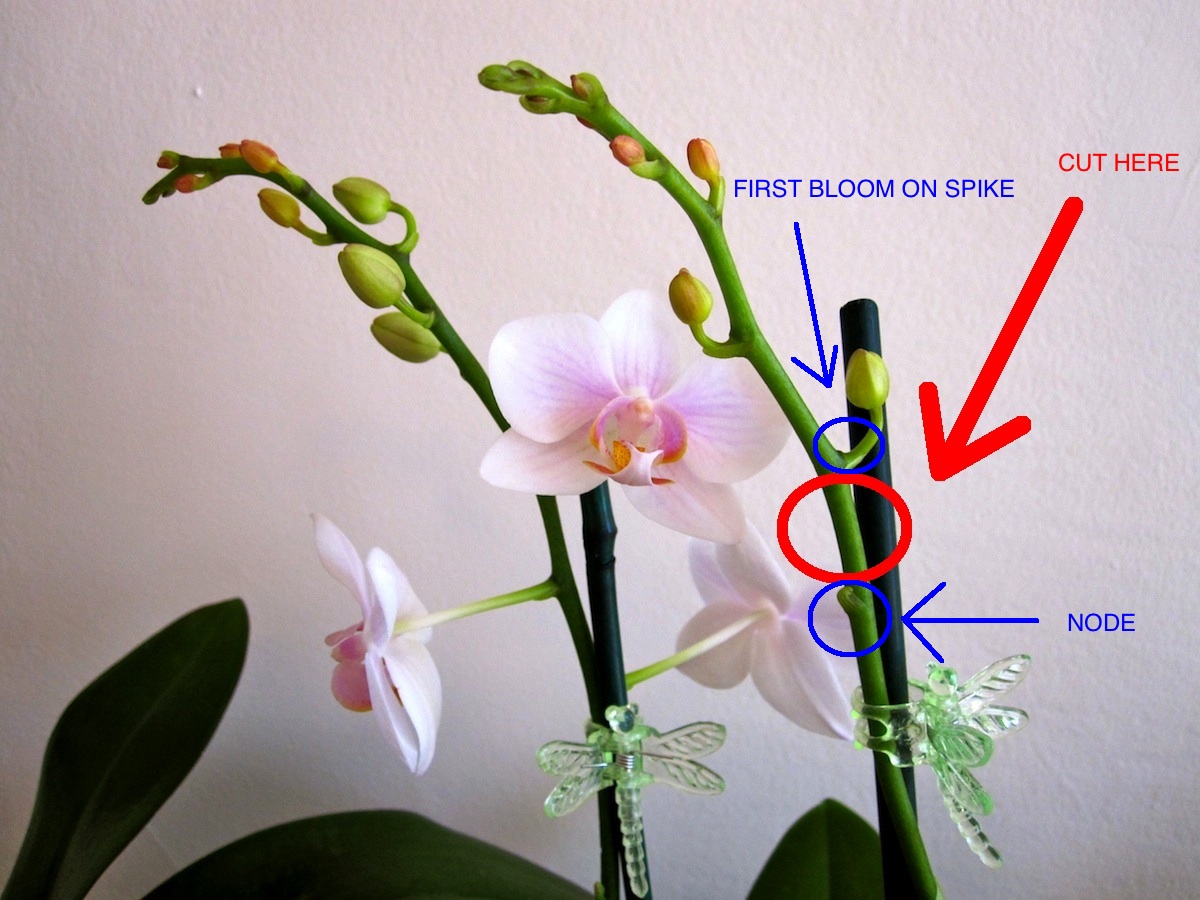 Phalaenopsis orchids, sometimes known as “moth orchids,” make up the majority of houseplant orchids. In their natural habitat, tropical woods, epiphytes (plants that grow on other trees), receive either intense, indirect light or some scattered light among the leaves.

Because of this, the leaves and stems of orchids are extremely susceptible to intense sunlight and rapidly turn burned yellow as a result.

To avoid scorching the plant, move the orchid to a spot with strong indirect light.

The stem loses its look and is too damaged to hold blooms if it has been severely burnt, turning from green to yellow.

If the stem has been harmed by sunshine, I personally advise cutting it right back to the base with a good set of pruners. The orchid can focus its energy and resources on establishing a new, healthy stem that can support a stronger bloom when the conditions are favorable by cutting the injured stem back to the base.

Although orchids can produce new stems and bloom at any time of the year, they typically do so in the spring and summer when the days are longer and the light is better.

I advise using a particular orchid fertilizer to make sure the orchid gets the nutrients it needs to flourish. This fertilizer gives orchids the correct nutrients in the optimum concentration so they can focus their efforts on developing new flower stems and showing off their blooms. 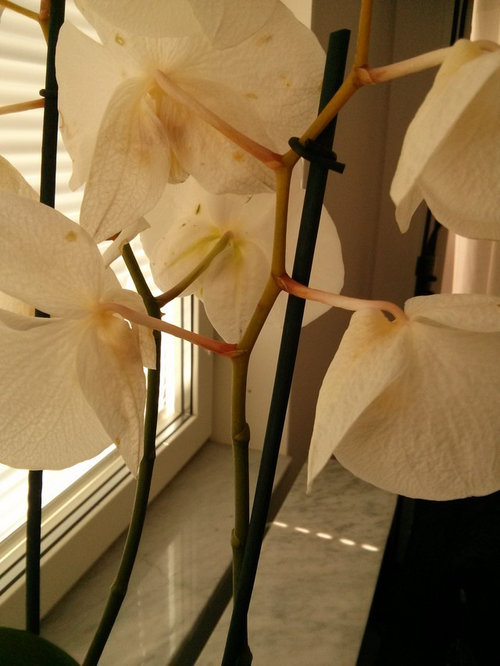 In their original tropical environment, orchids are epiphytes, which means they grow in trees rather than terrestrial plants, which grow in soil.

As a result, in order to flourish, orchids require a potting medium that mimics their natural surroundings, allowing for proper drainage, air circulation around the roots, and, preferably, humid conditions.

Based potting soils are the best for growing orchids. If the orchid is in regular potting soil or compact moss, the roots will rot and die because the potting media absorb too much moisture and are too dense for the orchid to survive.

The surviving roots cannot absorb enough moisture or nutrients to support the leaves and stalks, which leads to the blooms dropping and the stems and leaves turning yellow if too many roots are killed off.

Reduce watering so that the potting media dries out significantly between each round of watering in order to keep the orchid. Check out my article on how frequently to water orchids.

Orchid stress can be decreased by misting the leaves to enhance humidity.

Examine the roots of the orchid by removing it from the potting material. Healthy roots should have a strong, plump feel, look green immediately after watering, then gradually turn gray between waterings.

If roots are succumbing to overwatering and soil compaction, they become gray, shrivel up, and become papery. (To learn more about the symptoms of overwatering an orchid, see my article, Is My Orchid Over or Under Watered?)

With a good pair of pruners, cut off the unhealthy, dying roots, either back to the base or to the healthy growth.

Change the potting soil out with orchid potting soil made of pine bark, which mimics the native conditions of the orchid and allows for efficient drainage and air circulation around the roots.

Repot the orchid in a container with drainage holes in the bottom, ideally one made of clear plastic so you can see how the roots are doing and determine when to water the plant.

Orchid roots may also photosynthesize which helps the orchid rejuvenate so a clear pot also enables for the sunshine to reach the roots. (Read my article on the finest orchid pots.)

Waiting for any yellow leaves to fall off naturally is the best course of action because removing or cutting them off can result in needless wounds that could develop infected.

If the yellow stem (flower spike) of the orchid has totally withered away, trim it back; this can encourage new growth.

The orchid can recover if it receives weekly watering, is placed in bright indirect sunshine, and has its leaves and roots misted to enhance humidity.

(Read my post on how to rescue an orchid with yellow leaves for additional information.)

Why are my orchids stems turning yellow?

If orchid stems are exposed to too much sunshine, they can become yellow. Orchid stems and leaves require either indirect light or filtered light because they are evolved to growing in the shade of a forest canopy. The leaves and stem become yellow if they are in direct sunlight.

Should I cut the yellow stems off my orchid?

When the flower spike is withering or the plants receive too direct light, yellow stems on orchids might appear. The stems can also change color to red, pink, or brown; however, if they turn black, it may indicate a fungus infection. Yellow, withered stems should be trimmed because they won’t bear flowers.

When you see that your orchid’s bottom leaves are yellow and withered and that its buds are dropping off rather than opening, you know it is dehydrated (bud blast). To determine whether you have overwatered or underwatered your phalaenopsis orchid, follow these steps.

What color should orchid stems be?

A healthy orchid spike is green in hue. You should strive to have all of your orchid spikes and stems this hue. The presence of a green orchid spike indicates that the plant can transfer nutrients from the roots and leaves to the blooms.