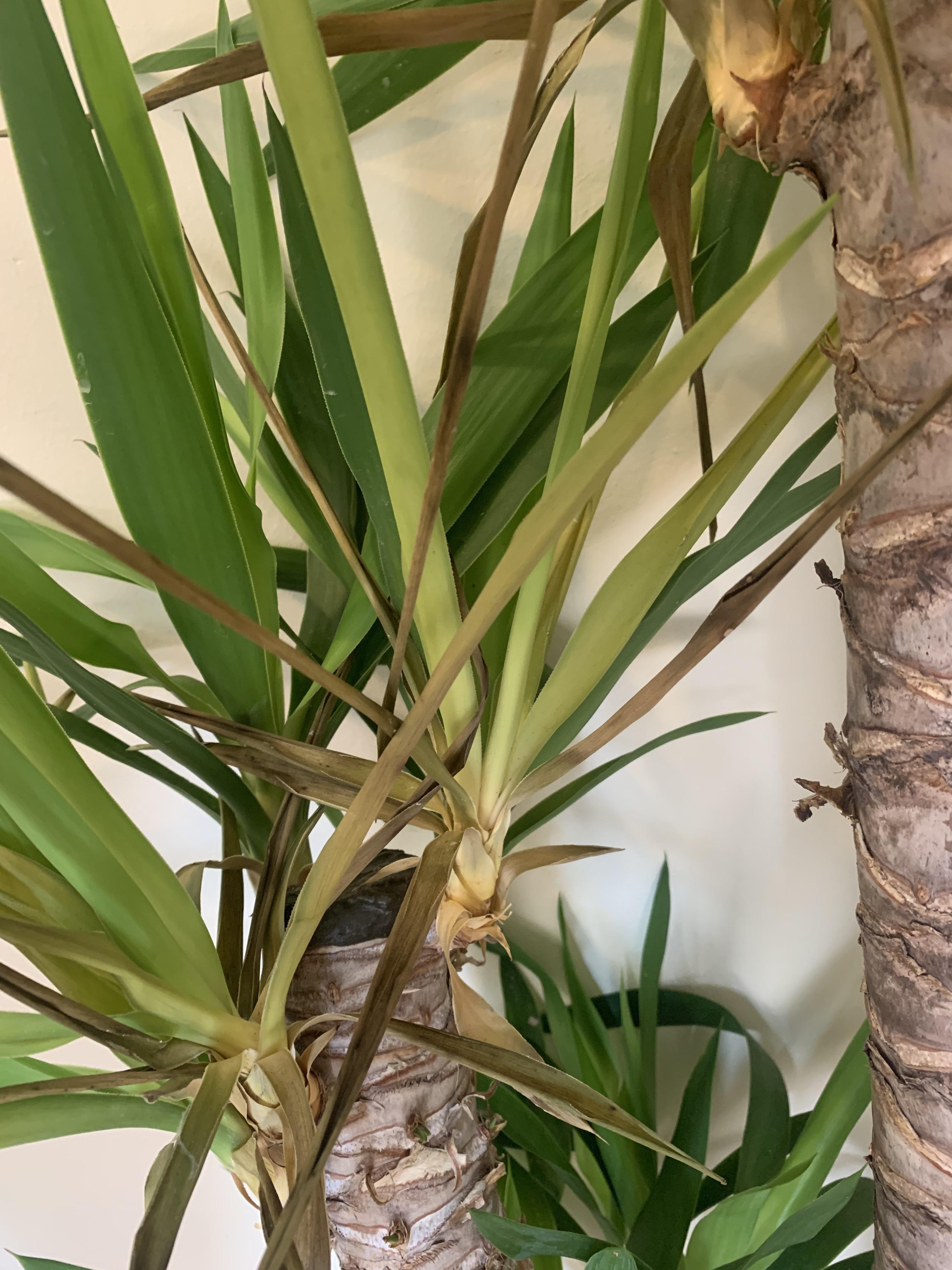 Yellowing yucca leaves are an indication of stress brought on by overwatering and an excessive amount of moisture surrounding the roots. Although yuccas can withstand drought, they need well-draining soil to prevent the yellowing of their leaves. Another sign that your yucca needs more direct sun are yellow leaves.

A young yucca plant’s leaves frequently turn yellow as a symptom of stress as a result of the differences in environment between the garden center and your house or yard.

Learn the cause of the yellowing of yucca leaves as well as a solution by reading on.

Yellow Yucca Leaves Due to Too Much Moisture Around the Roots

The most common reason for Yucca leaves becoming yellow is because of too much moisture around the roots produced by:

Yuccas are native to hot, dry climates, including the dry deserts of Mexico, the Caribbean, and Texas’ arid prairie and mountainous regions.

Because they have evolved specifically to grow in dry, sandy soils that do not retain much moisture and environments with little rainfall, they are drought tolerant.

The yucca’s optimum soil conditions are not met if its roots are constantly submerged in moist soil, and this can lead to yellowing of the leaves, a sign of stress.

Long-term exposure to moist soil makes yuccas vulnerable to the fungus root rot, which causes the leaves to turn yellow and then black and possibly droop.

How to Save Over Watered Yucca Plants with Yellow Leaves

Replicating some of the lighting, watering, and soil conditions of the original environment is the key to saving yucca plants with yellow leaves.

If your yucca is placed in a decent amount of direct sunlight and the conditions have been changed to support a dryer soil mixture around its roots, the plant should start to show indications of recovery (South facing window).

The yucca may have root rot, which frequently results in plant death, if all of the leaves are yellow and the plant has been in saturated soil for a long time. For this reason, it is important to follow recommended practices for watering and soil conditions.

(For more on how to determine the best watering schedule for yucca, see my post on how to water yucca plants indoors.)

The Yucca’s leaves start to yellow and droop as a sign of stress if it receives too much shade.

As long as they are in a bright South facing Window with access to as much direct light as possible, Yucca plants can live indoors in the winter.

Even if the yucca is in a sunny area, the lower leaves may still turn yellow since the amount of sunlight and its intensity are much reduced in the winter. Thus, in reaction to decreasing light, the yucca transfers its energy to the upper leaves, causing the low leaves to wither away.

The plant should then recover once there is enough sunlight, either in the spring or after you have moved it to a more sunny area. The lower leaves can then be clipped as they do not recover.

You should aim to choose a location where as much of the yucca as possible is in direct light, even in the Winter months, because yuccas may grow fairly tall and can cause a scenario where the higher leaves are shaded due of the angle of the sun entering through the window.

Yuccas are very slow-growing plants, so it may take them some time to recover after a period of sunshine deprivation, but with patience and as much sunlight as possible, the yucca should recover in the spring.

The tendency of yucca plants to have their leaves turn yellow soon after being purchased from a nursery or retailer is a regular issue.

When moved, yucca leaves react by turning yellow due to a change in their environment.

The yucca plant may experience some shock when it is relocated from the garden center to your house or garden because it is accustomed to the unique conditions of the nursery greenhouse in which it was grown.

When growing conditions are more dissimilar, the effect is more pronounced.

For instance, the yucca’s growing conditions may differ from those in your home if it has been exposed to stable temperatures, sunlight, and a set watering regimen.

The transplant stress is probably only going to last as the yucca gets used to its new surroundings.

The yucca should recover if properly hydrated (once every two weeks) and placed in as much direct sunlight as possible.

However, this may require some patience since yuccas are generally sluggish growing, so expect progress in the coming weeks. Some of the yellow leaves may die back.

Any dead growth should be pruned back to promote new growth.

Yucca Leaves Turning Yellow Due to Lack of Water 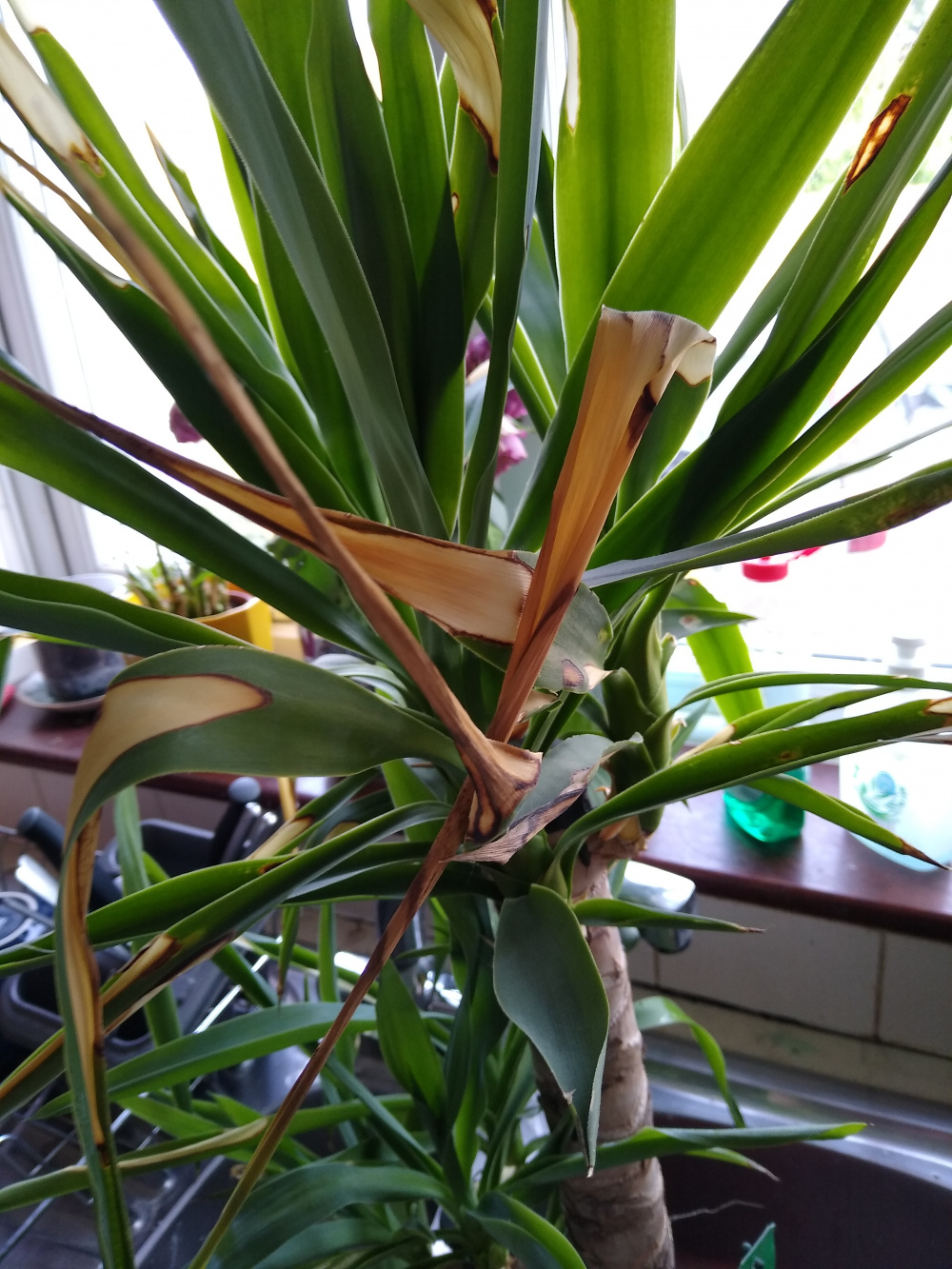 As yuccas are drought-resistant, this is a much less likely cause of yellowing leaves, but it can still happen if the plant has been neglected for a very long time, is in a small pot, or is in a hot climate with low humidity, which can make it so that water evaporates too quickly for the yucca’s roots to absorb.

While yuccas don’t need to be watered very often (about once every two weeks or when the soil feels dry to the touch), they do need a good soak as opposed to a light soaking.

A potted yucca should be watered by thoroughly soaking the soil and letting any extra water drip out the pot’s base. This makes sure that the water has permeated the soil to the roots rather than just maintaining the soil’s moisture at the surface.

As a symptom of stress, the Yucca’s leaves start to yellow and droop when it receives too much shadow.

Yucca plants may endure the winter months indoors as long as they are placed in a bright South-facing window with as much direct light as possible.

Even if the yucca is in a sunny area, the bottom leaves can still turn yellow because Winter has substantially less sunlight, both in terms of hours and intensity. In order to survive, the yucca shifts its energy to the upper leaves in reaction to lower light, which causes the low leaves to wither and die.

How do you revive a dying yucca plant?

Yucca leaves respond to a change in their environment by becoming yellow when they are moved.

How do you know if your yucca plant is dying?

The yucca plant may experience some shock when it is relocated from the garden center to your home or garden because it has become accustomed to the unique conditions of the nursery greenhouse in which it was raised.

For instance, if the yucca has been growing under conditions that have included stable temperatures, exposure to sunlight, and a set schedule for watering, its circumstances are probably different from those in your home.

Will yucca leaves grow back?

As the yucca becomes used to its new surroundings, the transplant stress is probably just brief.