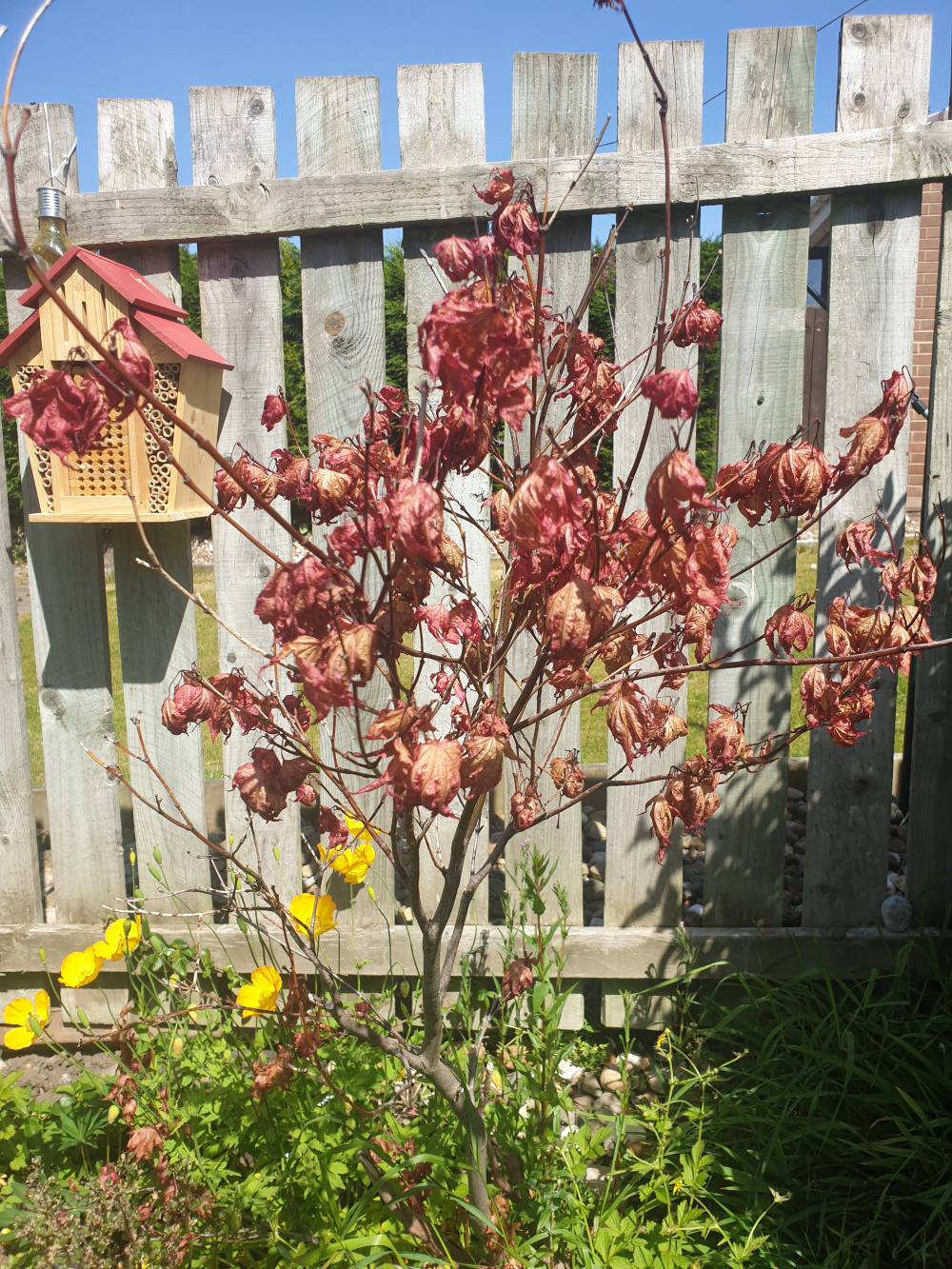 Japanese maples, commonly referred to as acers, or “Acer palmatum,” are little trees that flourish in somewhat shaded, well-draining soil that is rich in organic matter.

Fungal infections and other pathogens that flourish in too moist soils are frequently the cause of a dying Japanese maple. Japanese maples die as a result of root rot, which is encouraged by saturated soil. Aside from having brown, wilted leaves and a withering appearance, maples also suffer from excessive wind, sun, and lack of water.

Verticillium wilt and Phytophthora (root rot), which are problems in wet soil and frequently kill the tree, are the most prevalent fungal infections that harm Japanese maples.

However, excessive wind, harsh sunlight, or a lack of water are other factors that might result in burned or brown leaves and can be remedied by making a few changes to the maple tree’s environment.

Continue reading to learn why your Japanese maples are dying and how to stop it or fix the issue.

Japanese maples have a friable structure that absorbs moisture while allowing excess water to drain away rapidly, making them well-adapted to growing in soils that are rich in organic matter (compost, leaf mould, etc.).

In too-wet soils, Japanese maples are susceptible to Verticillium wilt or Phytophthora root rot due of:

All of these elements have the potential to make the soil soggy, preventing the roots from growing in well-draining soil.

Verticillium pathogens, which infect Japanese maple trees, thrive in moist soils. Regrettably, Japanese maples are particularly vulnerable to the fungal diseases that are brought on by moist soil, and even mature maple trees might suddenly show symptoms and die.

Verticillium signs include leaves that are going brown, grey, yellowing, and curving inward. Some branches may even lose all of their leaves.

Brown Japanese maple leaves are another sign of drought stress, inadequate watering, and excessive fertilization. However, if your maple is in damp soil, verticillium wilt or root rot is almost probably the issue.

Unfortunately, treating a maple that has wilt is exceedingly difficult, and prevention is far preferable to treatment.

The most crucial step in effectively preventing Verticillium or any other soil pathogens that can harm maple trees is to make sure the soil is well-draining and that planting areas have been amended with tons of compost or leaf mould to create the ideal well-draining soil structure.

In order to make the soil more permeable, which improves oxygen levels in the soil for root respiration and a healthy soil ecology and to facilitate drainage, grit or horticultural sand can be added to the planting area.

In regions of your yard that are heavily clayed or flooded, Japanese maples struggle to flourish and are more likely to perish within a few years from root rot or other fungal soil infections that prefer moist soils.

It is best to plant maples in pots or containers if you have heavy clay soil or bog areas in your garden because you can easily provide the best soil profile for them there. It can be very difficult to amend heavy clay soil to suit Japanese maple.

The illness can remain in the soil and infect new plants if not treated, so if the plant has Verticillium, I advise digging it up, burning it, or throwing it away (to kill the virus). You can also treat the soil with a fungicide (available from garden centers).

For a complete list of Japanese maple diseases, read this article.

Too Much Wind, Sun and Not Enough Water Causes Dying Japanese Maples 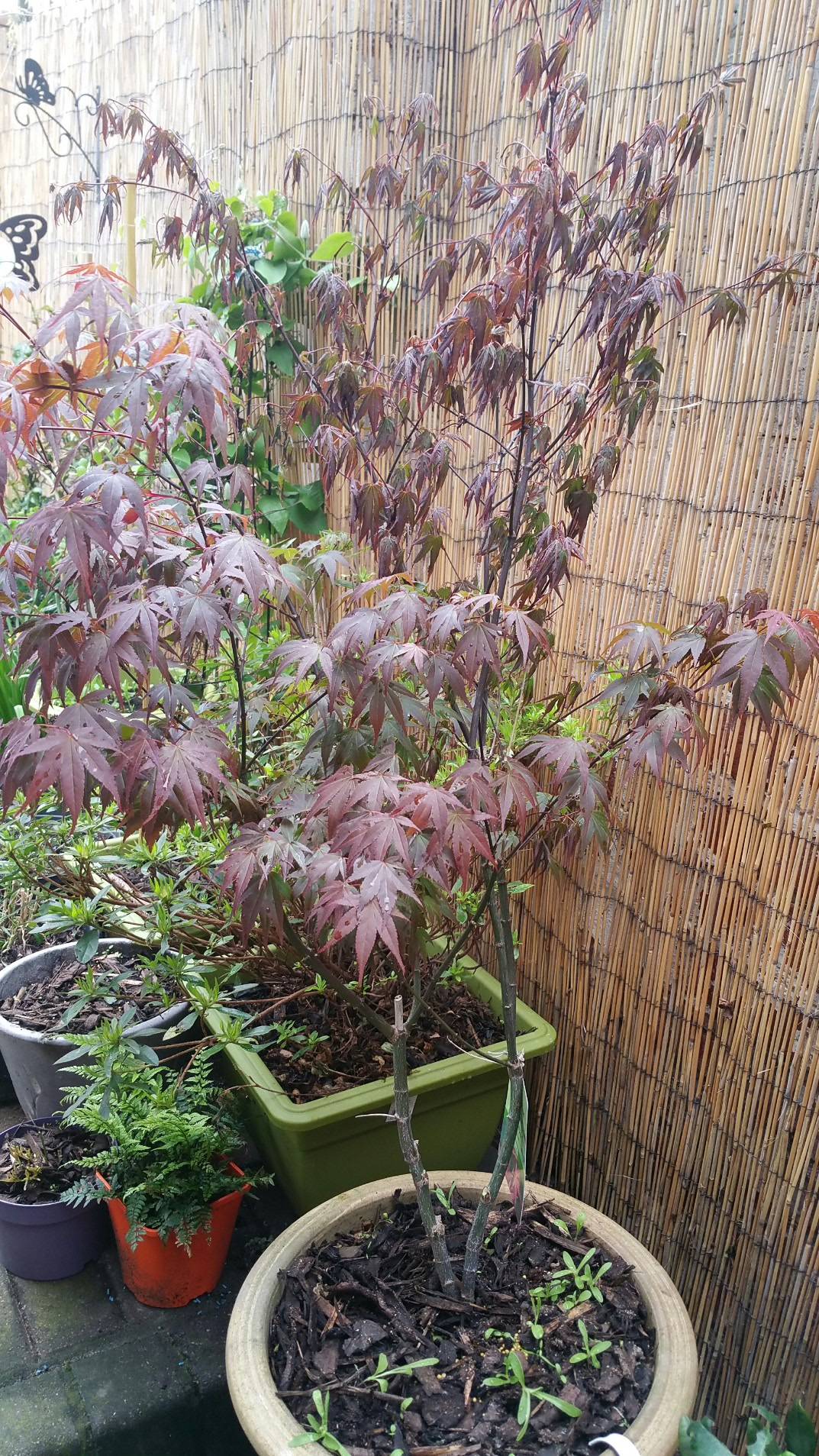 The Japanese maple is also shielded by forest canopy from harsh sunshine, which can further dry up the leaves and give them a burned appearance.

Japanese maples need to be cultivated in a protected area with soil that is regularly moist, some sunlight, and protection from the wind.

It’s crucial to take action if your Japanese maple’s leaves appear burnt with a possible hint of brown at the edge.

If Japanese maples are grown in the right soil that is rich in organic matter, they won’t necessarily need additional watering in a temperate zone with significant rainfall.

However, it is essential to water the maple at least once a week in dryer locations with scorching summers and to add a mulch to enrich the soil and retain moisture.

The best mulch materials are compost and leaf mold because they enrich the soil with nutrients, have a remarkable capacity to hold water, and have a friable structure that lets excess water drain away to avoid the soil from becoming soggy.

The Japanese Maple should start to show signs of recovery in about a week with constant watering, mulching, and shelter from the wind and sun, though it may take longer depending on the severity of the damage.

The Japanese maple may need to be moved to a more suitable place in well-draining soil that has been amended with compost if a wind break cannot be created or if the soil is extremely sandy or stony and does not retain any moisture.

Too much Fertilizer Harms Japanese Maples

If Japanese maples are planted in healthy soil that has been treated with compost, they are not heavy feeders and won’t need any more fertilizer.

Another reason for leaf scorch with brown or yellowing leaves and excessive growth with flimsy stems that can droop is using too much fertilizer.

Even if you haven’t given your maple any fertilizer, it’s still possible that extra lawn fertilizer could dissolve in rainwater and run to the soil nearby, scorching the leaves.

It should be mentioned that due to the cold, extra fertilizer can be a serious issue if it is applied too early or too late in the growing season since it makes the new plant more susceptible to frost damage.

Frost damage causes the sensitive new growth to become black, but pruning it back with a pair of pruners won’t do any harm to the tree.

There isn’t much you can do once too much fertilizer has been sprayed other than to wait for the plant to recover.

To avoid potential damage from cold, an aphid infestation, or sun scorch, cut down any excessive growth and any leaves that are in poor condition.

As long as you don’t use fertilizer, the Japanese maple should recover by the following year.

When fertilizing Japanese maples for growth, only use half-strength multipurpose fertilizer if the trees are placed in a pot or sandy soil.

Since it comes in granule form, contains all the nutrients at the proper concentration for your plants, and releases nutrients gradually to avoid issues related to too much fertilizer, I personally like to use miracle gro fertilizer.

However, in most gardens, using a compost or leaf mould mulch enhances soil structure, supplies nutrients, and retains moisture, creating the ideal environment for your Japanese maple. 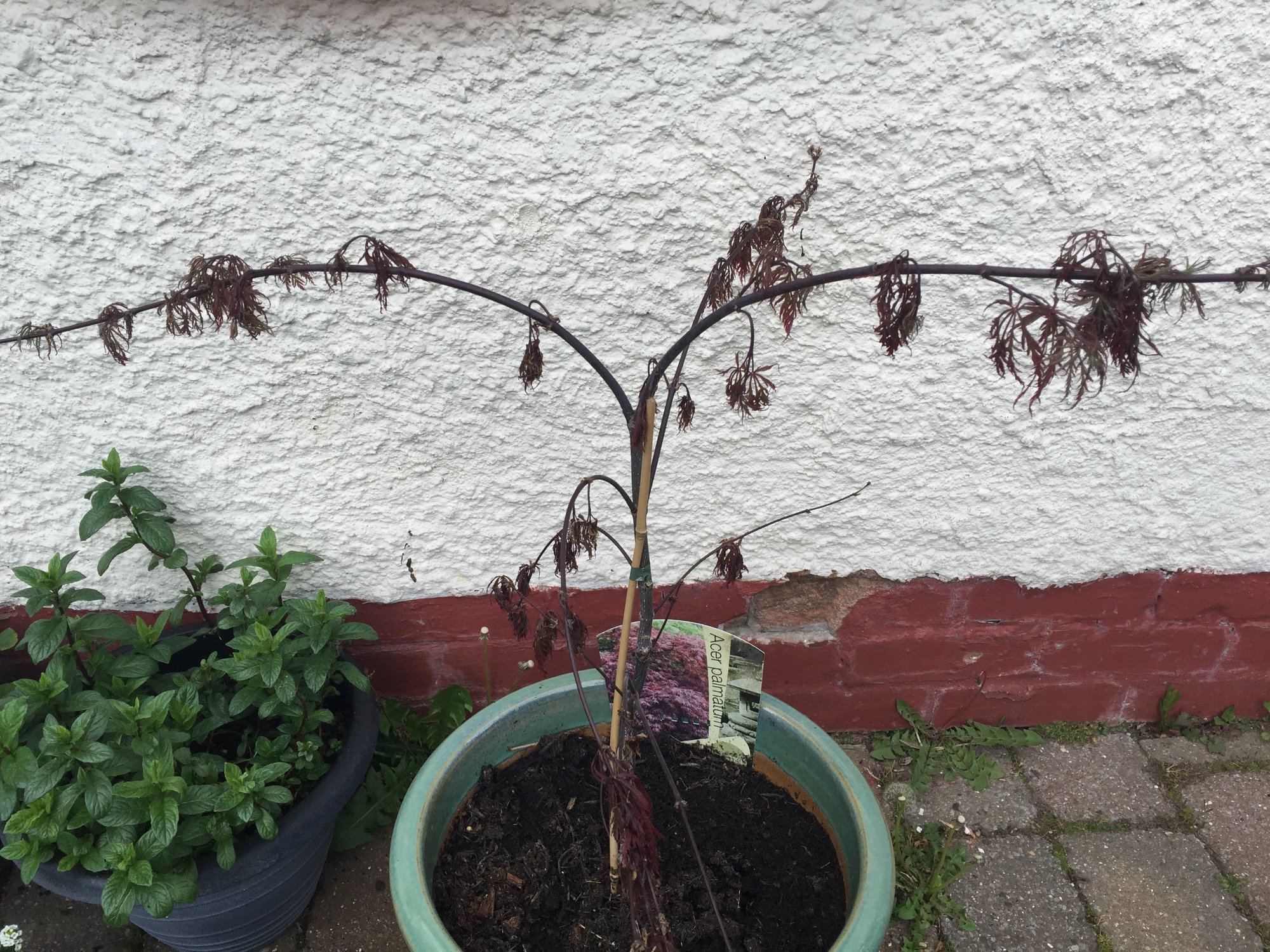 The majority of Japanese maple species that are offered for sale at garden centers like acidic soil with a pH of 5.5 to 6.5. (pH 7 is neutral, any number below is acidic and any number higher then 7 is alkaline).

If the soil in your garden is alkaline, some nutrients become insoluble and the roots of the Japanese maple cannot absorb the necessary nutrients (chlorosis), which can result in poor growth or plant death.

Due to the fact that most organic matter has an acidic pH when it has fully decomposed, most gardens contain slightly acidic soil.

Nevertheless, certain places do have naturally alkaline soil because of bedrock beneath, construction work that is immediately below the soil, or even the use of wood ash around gardens (wood ash is very alkaline).

The soil pH is not a problem, and your Japanese maple is dying for another reason if acid-loving plants like roses, blueberry bushes, azaleas, rhododendrons, and camellias are flourishing in your garden or even gardens in your neighborhood (assuming you are not using wood ash as a mulch).

However, I advise purchasing a soil gauge from your garden center or amazon if it is challenging to estimate the pH of the soil through observation. Soil gauges are inexpensive, relatively simple to use, and they can tell you your soil’s pH.

If at all possible, move the Japanese maples into a pot with multipurpose or ericaceous compost if your soil is not acidic.

It is feasible to lower the pH to make the soil more acidic and suited for Japanese maples if it is only neutral or slightly alkaline, or if it has been affected by environmental causes. However, I would only advise doing this for maples that are too large or difficult to transplant.

Use ericaceous compost (available from garden centers or online) as mulch around your maple tree and an ericaceous fertilizer (ericaceous simply means it is made specifically for plants that prefer acidic soils).

Every six months or so, spread an inch of compost around the Japanese maple to keep the soil acidic so that it can thrive.

It can take several months before your Japanese maple begins to recover because altering the pH of the soil is an ongoing process.