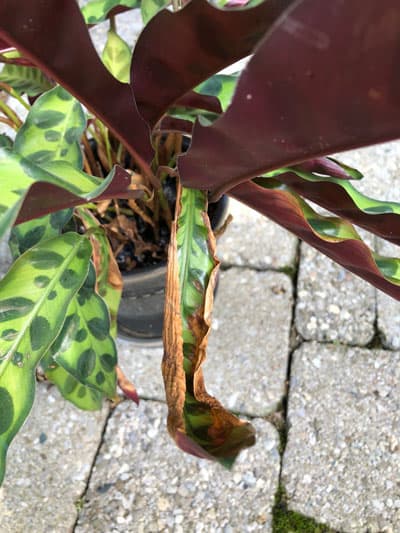 A calathea that appears to be dying usually has dry soil around the root ball as a result of insufficient or light watering, which causes the leaves to droop and turn brown and crispy.

Low humidity causes the margins of calathea leaves to become brown and crispy, which causes them to wither and lose moisture.

In order to revive calathea plants, it’s critical to mimic the ideal growing circumstances of their original tropical rainforest habitat, which include high humidity, constantly moist soil, and mild temperatures away from direct sunlight.

Learn what is causing your calathea to die back and how to rejuvenate it by reading on.

Calathea, commonly referred to as a “prayer plant,” is a plant that is indigenous to the rainforests of South America. There, it flourishes in hot, humid climates with soil that is perpetually moist thanks to frequent rainfall.

Homes often have low humidity levels, but because the calathea is acclimated to greater humidity levels, this can soon result in stressed-out leaves with dark tips. The effects of air currents from air conditioners in the summer and heat sources in the winter can make this worse.

To replicate the moist soil conditions of the calathea’s natural habitat, the potting soil should be constantly damp (but not saturated).

The calathea normally droops and goes brown at the leaf margins if the soil is allowed to dry out between watering sessions; under extreme drought stress, the leaves completely turn brown and the plant withers.

Watering the calathea too lightly, which only moistens the top inch or so of the soil, is a frequent mistake.

This indicates that water does not effectively permeate the soil, and the plant will wither away because the roots at the bottom of the pot cannot obtain the moisture they need.

Calathea can also thrive in shade and do better in filtered or strong, indirect light than in direct sunlight.

Calathea leaves that receive too much direct sunshine may fade, burn, and dry out, which will cause the leaves to turn brown and wither.

How to Revive a Dying Calathea with Drooping, Brown Cripsy Leaves

The calathea can begin to heal once you have changed the environmental factors and maintenance procedures for your plant so that they mimic those found in its natural habitat.

The intensity of the drought stress determines how soon the calathea leaves recover, but in general, over the course of the following few weeks, there should be signs of improvement.

Cut back to the stem any leaves that have gone fully brown because they frequently do not come back. This encourages the development of new leaves.

Calathea Leaves Turning Yellow or Brown and a Dying Appearance 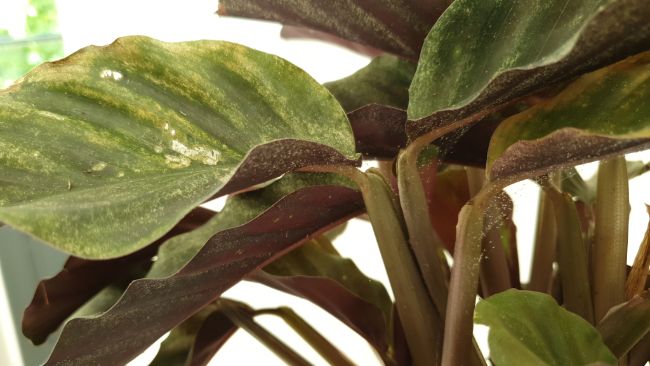 Many of the overwatering signs, such as brown or yellow leaves and a drooping appearance, are superficially similar to underwatering, which can be perplexing.

Calathea is a rainforest plant, however it cannot survive its roots being completely submerged in water because this prevents roots from breathing, which is necessary for their ability to absorb water and nutrients.

Surprisingly, this can make the calathea appear to be underwatered while, in reality, more water may be making the situation worse. The root rot conditions that can kill the calathea plant are promoted if the plant is left in standing water for an extended period of time.

The use of saucers, trays, and decorative outer pots to keep excess water from pouring inside the house or pots without adequate drainage holes in the base are other common causes of too much water surrounding the roots.

The roots are seated in soggy soil and these factors prevent water from escaping from the pot.

Depending on how long the roots have been in excessively damp soil, a variety of symptoms may manifest, but the quickest way to tell whether a plant is ill from underwatering or overwatering is to feel the soil via the drainage hole in the base.

Using too much fertilizer or applying it too frequently might also cause the leaves to turn yellow.

The calathea can recover if it has been relocated to a more ideal potting profile with well-draining soil and pots with efficient drainage, however recovery is typically gradual.

Wait until fresh growth and leaf emergence are visible. When new growth appears, you can clip back some of the leaves that have turned brown or yellow because they are not likely to recover.

However, calathea has likely developed root rot if it has been sitting in damp soil for a long time, which underscores the significance of excellent drainage.

Calathea are highly sensitive to chilly temperatures since they have adapted to a constantly warm environment. This might result in the leaves curling or a general lack of vigor in the plant, as evidenced by brown foliage, drooping leaves, or a dying aspect.

Calathea do fold inward at night, thus the common name “prayer plant,” as this adaptation helps to maximize the leaves’ exposure to the sun throughout the day. This is entirely normal and has nothing to do with unfavorable circumstances.

Calathea can exhibit signs of stress as a result of temperature changes in the home because temperatures are often stable in their habitat.

Keep calathea away from air currents from air conditioners, draughts, forced air, and heat sources because of their sensitivity to cold temperatures.

Additionally, if your calathea sits on a window sill, be cautious that the leaves may come into touch with the window, which may be much cooler than the rest of the house, damaging the calathea’s leaves.

Keep your calathea in an atmosphere with a more consistent temperature and strong, indirect light, and the plant should start to recover in a few days. 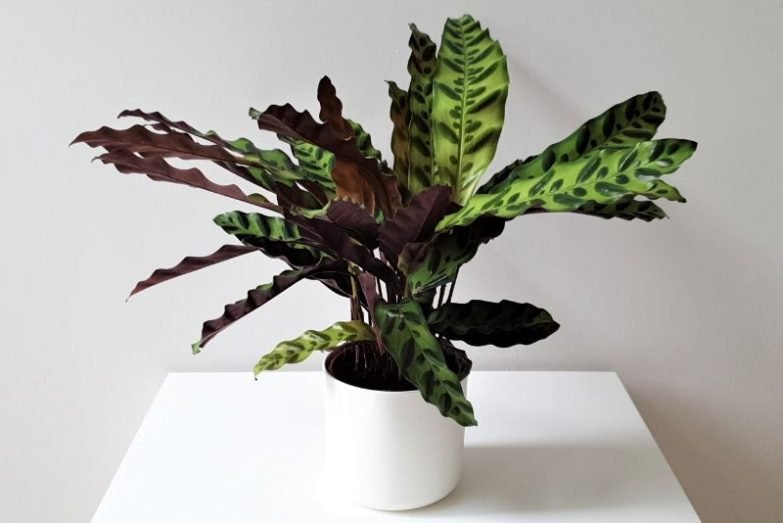 When there is direct, strong sunlight, leaves might wilt or even turn a burned yellow or brown.

Calathea leaves typically look their finest when the plant is situated in bright indirect sunlight since this guarantees the plant has enough light for its intriguing variegated patterns but prevents any negative effects.

The residual damage to the leaf does not always cause the plant to die, but once the leaves have been sunburned, they do not recover in appearance.

For aesthetic purposes, trim any sun-burned leaves back to the root to neaten the appearance. However, if the plant has a lot of leaves and they are severely sunburned, move it to a spot with indirect light and wait for new growth to appear before pruning a large amount of leaves.

The calathea may require some time to recover, but if you have patience, you can see improvements in the plant’s look over the spring and summer.

Why is my Calathea leaves turning brown?

Your tap water may be the most frequent cause of the edges of your Calathea leaves becoming dark. Salts, chlorine, minerals, and fluoride found in tap water can accumulate in your plant’s soil and cause the tips of its leaves to burn, turn brown, and curl up.

How often should I mist Calathea?

Should I cut off Brown Calathea leaves?

Trim any damaged or dead leaves from the Calathea as necessary using sharp, long-tipped plant scissors. Pruning is required at least once or twice a year because of how quickly the plant grows. To prevent diseases from spreading to the plant, always use sanitized instruments.

Can Calatheas come back from the dead?

Despite the fact that it appears like all of your Calathea’s foliage has died, there is a very small chance that it will still grow new leaves. These plants frequently store energy in unique root systems known as rhizomes.

How do you revive a dying Calathea?

If you want to save a dying calathea, make sure the soil is moist but drains well, place the plant in bright, indirect light, and maintain temperatures between 65 and 75 degrees Fahrenheit (18 and 23 degrees Celsius). Avoid draughts or air conditioning currents that could dry out the leaves and frequently spray the plants.